Hollywood might be all kinds of “woke” and hyper-sensitive and crippled by a censorious political correctness that declares countless topics and left-wing sacred cows verboten, but “joking” about raping children is totally cool.

Before we get started, please allow me to be very clear about something: this is not about policing jokes. I am a proud and out free speech extremist. No words should be off-limits, and no one should be personally destroyed over bad words or tasteless jokes. What’s more, our society could use some re-training in the all-important lesson that self-righteousness is a poison you give yourself, while forgiveness heals the spirit and soul.

Nevertheless, there is still an observation worth making here, because what we have on our hands is an entertainment industry that will ex-communicate you for being “insensitive” (toward anyone other than a conservative), that will blacklist you for voting in an “unapproved” way, that will publicly humiliate and “re-educate” you for telling “inappropriate” jokes, but has absolutely no problem with you telling countless jokes about raping a child, even a baby.

While I have already explained why disgraced Guardians of the Galaxy director James Gunn has much bigger problems than the tweeting of countless child rape “jokes,” what does it say about an entertainment industry that will join the mob to destroy Laura Ingraham’s career for calling 17-year-old activist a “whiner,” but tolerates this from James Gunn… 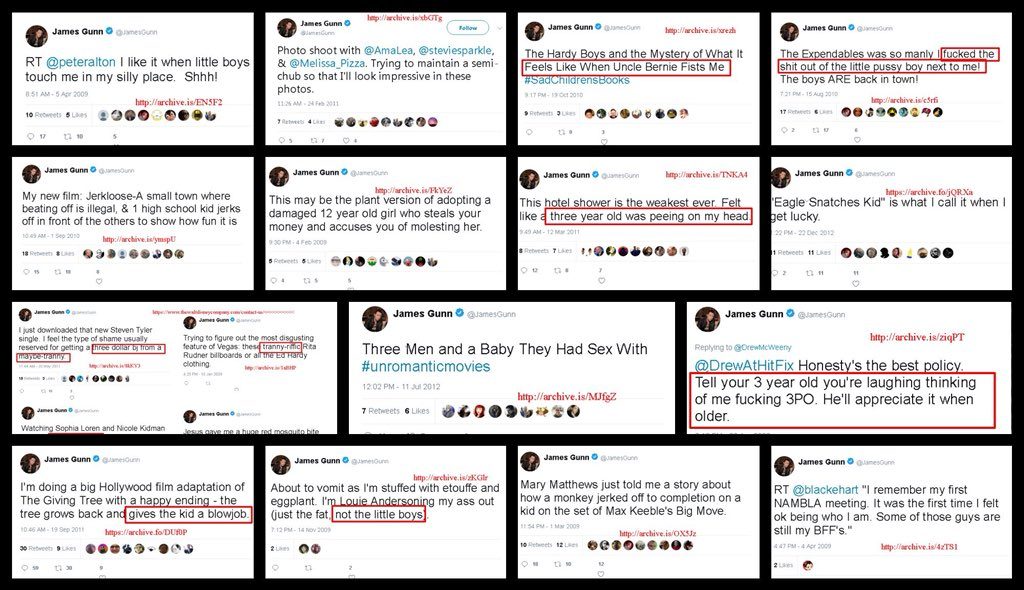 …and this from Michael Ian Black…

I don't like watching "iCarly" with my daughter because there is nobody on that show I want to molest.

What's Latin for "bring me some boys"?

…and this from Sarah Silverman….

Hey, is it considered molestation if the child makes the first move? I'm gonna need a quick answer on this.

…and this from Patton Oswalt…

My dong is super-friendly and loves getting rubbed by children. #CareerEndingTwitterTypos

The angry "@" tweets from my hammer toed followers opened my eyes. "Pedo-phobe" shaming hurts us all. I am a PROUD pedophile!

…and this from comedian Anthony Jeselnik… 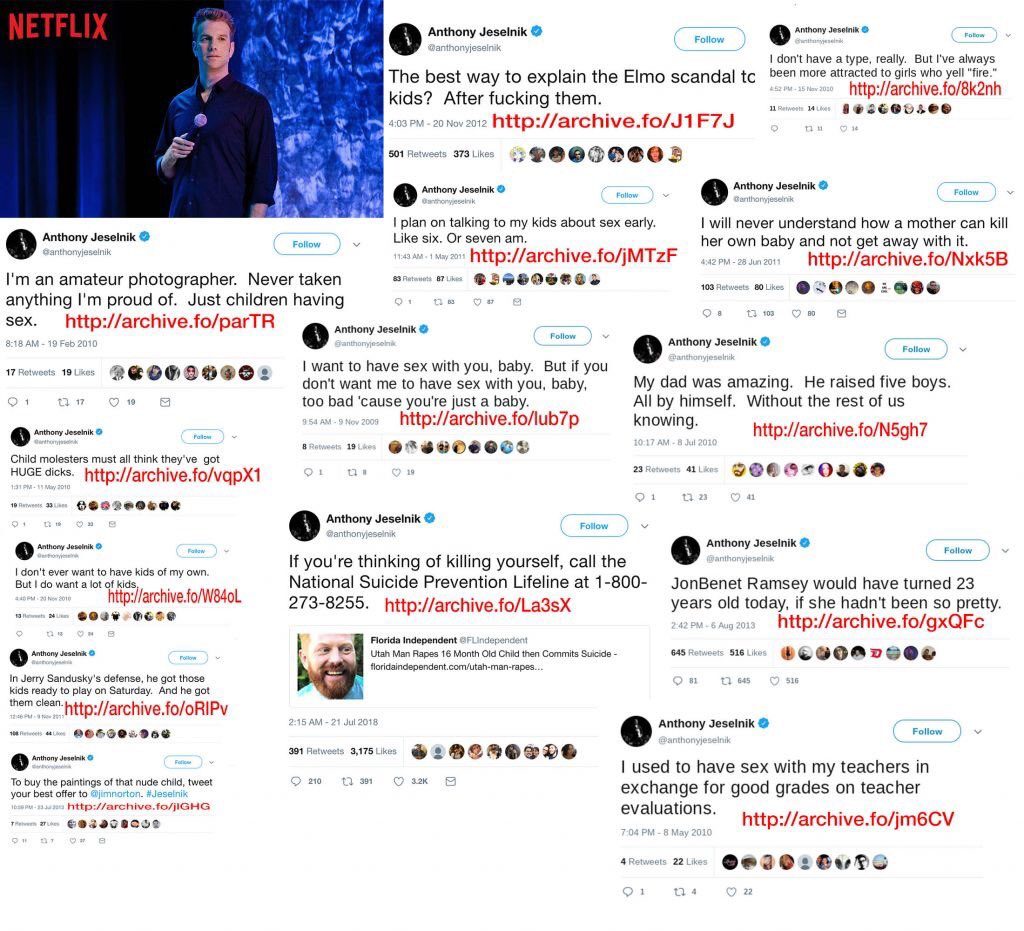 ….and this from David Nussbaum… 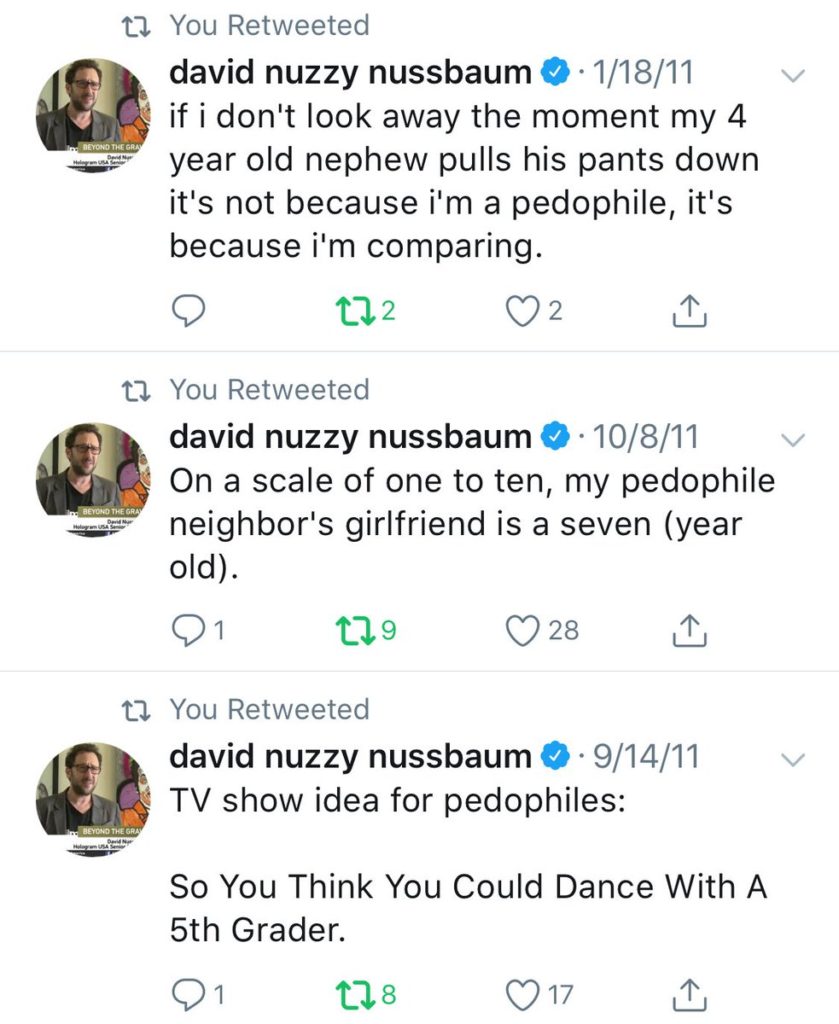 Again, this is not about policing jokes. No one should be losing their jobs over these jokes, and if all James Gunn was guilty of was jokes, if there was not a convicted peddler of child pornography attached to Gunn’s name, I would defend him, as well. Nevertheless…

Is it not interesting and worthy of note that Andrew Dice Clay had his comedy career destroyed for joking about adult women, that Sam Kinison was bullied into ending his observations about world hunger and AIDS, that Jerry Seinfeld refuses to go near a college campus for fear of the mob, that Roseanne Barr’s career is over forever due to one terrible tweet….

But jokes about raping children and babies come with no professional consequences?

And while we are at it…

The very same Hollywood blacklisting conservatives, aggressively working to destroy a pro-life film, calling for Laura Ingraham and Roseanne to lose their careers, declaring Trump supporters Nazis, and punishing anyone who jokes about gays, transsexuals, women, hunger, and AIDS —  this very same Hollywood is not only a-okay with jokes about child rape … they stand and applaud for actual child rapists…

Am I the only one who finds this interesting?