NEW YORK (AP) — Faced with a lengthy shutdown due the coronavirus pandemic, movie theaters are requesting relief from the U.S. government.

The National Association of Theater Owners (NATO), the trade group that represents most of the industry’s cinemas, said Wednesday that it’s asking for immediate federal help for its chains and its 150,000 employees. The theaters are requesting loan guarantees for exhibitors, tax benefits for employees and funds to compensate for lost ticket sales and concessions.

The organization said the movie theater industry is “uniquely vulnerable” to the crisis, and needs assistance to weather a near total shutdown of two to three months.

“This is an unprecedented challenge to the business,” said John Fithian, president and chief executive of NATO. “We’re looking to Congress and White House to understand this is a cultural institution where people gather.” 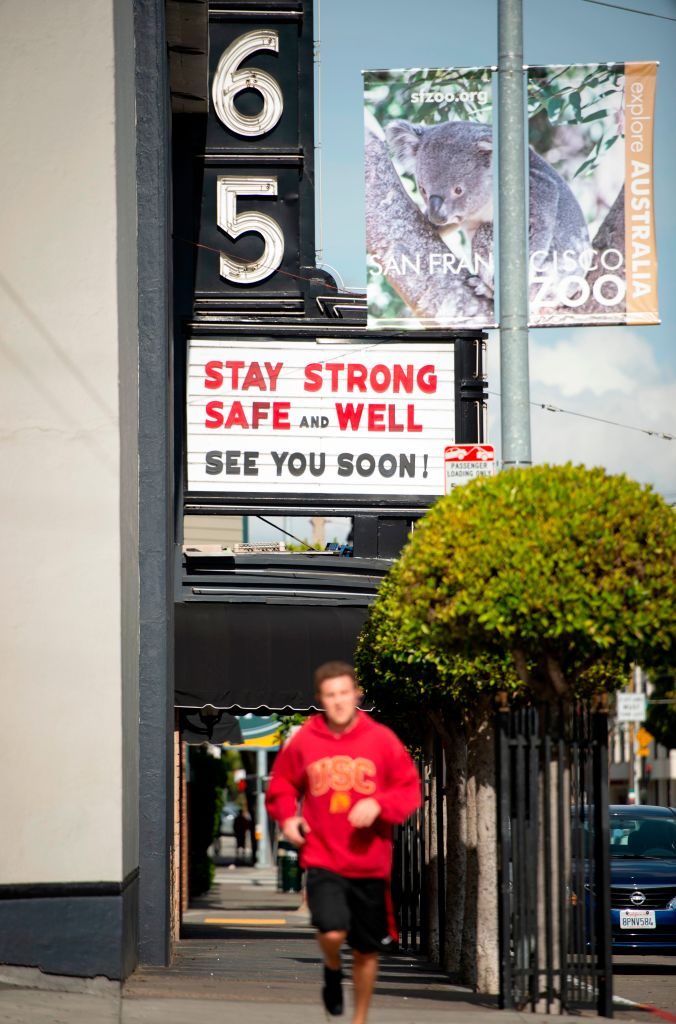 A man jogs by a theatre posting sign of support on it’s marquis in a mostly empty San Francisco, California on March 17, 2020. (JOSH EDELSON/AFP via Getty)

“We want our policy makers to know that at the end of this thing, when people have been cooped up in their house for several months, they’ll need a break to go out and do something collectively that’s affordable and fun and away from what they’ve just been through,” he said. “But we still need to be viable.”

NATO also said it will supply $1 million in aid for out-of-work movie theater employees. The majority of the industry’s workers are paid hourly. “Starting tomorrow, most of them won’t be paid anything,” said Fithian.

The closures followed federal guidelines against gatherings of more than 10 people. Hollywood has postponed nearly all March and April releases, and many May ones, too.

In the meantime, some studios have moved their new releases to on-demand platforms, a rare breaking of the traditional 90-day theatrical window. Universal earlier announced that “The Hunt,” “Invisible Man” and “Emma” will be released for home viewing on Friday.

“Sony Pictures is firmly committed to theatrical exhibition and we support windowing,” Sony Pictures chairman Tom Rothman said in a statement. “This is a unique and exceedingly rare circumstance where theaters have been required to close nationwide for the greater good.”