Two men have been jailed for robbing a pawnbroker with an imitation firearm when dressed in burkas, after members of the public foiled their cover because they “did not walk like women.” 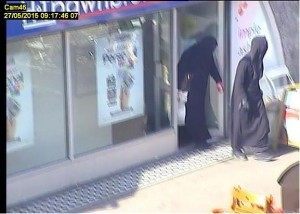 The robbery under way (photograph from Metropolitan Police).

The court heard how the criminals brazenly walked into the store in Brixton as it was opening. However, before they could begin threatening staff with their fake gun, shoppers on the high street  – not fooled by the disguise – raised the alarm early.

The duo managed to make off with £44,000 worth of jewellery and more than £10,000 in cash, however, because the police were already alert, officers were on the scene within minuets and apprehended the men after a short pursuit.

Football coach Michael Lindo (pictured right, above), 34, who was jailed for 11 years, had 19 previous convictions for robbery and attempted robbery. Trainee carpenter Aaron Anthony Dumetz (pictured left above), 24, was put away for nine years.

The judge praised the officers for pursuing the men without the knowledge the gun was fake. Investigating officer DS Gary Ferguson of The Flying Squad, East London Branch, said in a statement:

“On behalf of Met’s Flying Squad I would like to thank the local Lambeth Police officers, who bravely followed the two robbers from the scene and tackled them, despite not knowing at that time if the firearm used on the robbery was real or not.

“It was these officers and members of the public, who reported the two robbers actions to police, that has secured the conviction of these two men and the recovery of a substantial amount of stolen jewellery and cash. Lindo in particular is a career criminal and this timely intervention has averted a serious threat to public safety and commercial premises in particular.”

The sentence comes on the same day that an arrest warrant was withdrawn for a terror suspect linked to an Al Shabaab sleeper cell known as the ‘London Boys,’ who fled Britain disguised in a burka in June. He is now free to return to Britain after all charges against him were dropped.

In 2013 a gang of five dressed in burkas robbed Selfridges on Oxford Street, London for £1.5 million. They were jailed for more than 58 for the heist in 2014.