The action-man mayor of Hungarian frontier town Ásotthalom has invited “all active Europeans” to visit the border fence his government created, so they can learn how to protect their own countries.

Praising the remarkable success of the Hungarian border fence, which reduced daily illegal migrant incursions from some 10,000 a day to 30 in just the space of a week, mayor László Toroczkai acknowledged the fence hadn’t actually solved the European migrant crisis. Instead, blocking Hungary off had just shifted the migratory stream westwards to Slovenia.

This is not an insurmountable problem for mayor Toroczkai — the rest of Europe just needs to take a leaf out of Hungary’s book. Speaking in the short action-packed film — the second his office has released about the migrant crisis — Mr. Toroczkai said:

“…the problem has not ceased to exist, because the leaders of the European Union don’t want to follow our example. The number of illegal migrants who are entering Europe without being checked or controlled is increasing, only they avoid Hungary now.

“Their direction may turn any time, and if Europe perishes we will perish too. We have to defend the whole continent!”

Mr. Toroczkai’s solution to the problem is simple — encourage other European leaders to get to work protecting the borders of Europe by inviting them to his border town. Until recently the site of anarchic scenes, Ásotthalom sits on the main motorway crossing into Hungary from the south.

Now the fence has been erected, the mayor can’t help but boast about how quickly his town has returned to normality. Speaking down the lens of the camera, he says: “during the first half of the year, most of the illegal immigrants entered the territory of the European Union across our border.

“Almost 100,000 migrants, more than 80 per cent of whom were young men. The leaders of the European Union did nothing to protect their border, and that’s why we had to start taking action of our own. 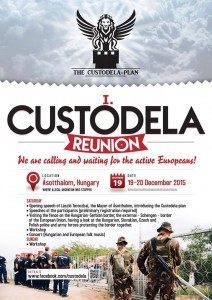 Official flyer for the mayor’s event in December

“In the past months we managed to stop the invasion. Now Ásotthalom is once again a land of peace and order, one of the safest towns in Europe”.

With this spirit, and wanting to help the rest of Europe mayor Toroczkai extended his invitation, remarking: “Therefore I am inviting all active Europeans to Ásotthalom on the 19th and 20th of December 2015 for a meeting where we will introduce our functioning border protection.

“We will establish an international information network that will open the eyes of millions of Europeans. If we remain silent, we will become victims. If we stand up and take action, we will win!”

The two-day event is being organised by the mayor and the Custodela organisation, a group that works to “defend real European values” and to “reveal the real face of multiculturalism”. Pre-registered attendees will be able to enjoy local cuisine, a tour of the border fence, demonstrations by the Hungarian, Polish, Czech, and Slovak army and police who defend it, and workshops on how to defend Europe.

Mayor Toroczkai will use the event to launch the Custodela programme, and guests will then be treated to traditional Hungarian and European folk music.

The film is not the first created by mayor Toroczkai. His office released another dramatic short in September to mark the official closure of the Hungarian border, warning migrants to not attempt crossing. Featuring dramatic car chases and border police officers galloping along the fence on horseback, Mr. Toroczkai warned:

“We welcome everyone who respects our laws and enters our country through our international border crossing point. But those who try to cross illegally may easily end up in prison… Hungary is a bad choice, Ásotthalom is the worst”.

Watch: Hungarian Mayor Warns Migrants Away From His Town