Breitbart London’s Editor in-Chief Raheem Kassam appeared on the Sean Hannity show last night, to explain the shocking migrant rape scandal unfolding in Europe, and to warn Americans that if they elect a left wing government a similar wave of mass migration could be triggered, bringing such horrors to the United States.

Mr. Hannity introduced the show by asking: “Do we need to consider… a cultural divide before taking people into our country”, pointing to the subjugation of women in Muslim majority countries.

He asking if the West should, “find out whether people are coming here because they don’t like living under such tyranny, and that they believe in equal rights for women, or, do they want to come here and advocate and advance values that are contrary to the Constitution?”

He referred to the fact that Britain now has 85 separate sharia courts and that there are now Muslim “no go zones” across Europe now. But most prominently, he referred to the orchestrated, mass sexual assaults in Cologne on New Year’s Eve, which shocked the world after Breitbart London first brought the news to the English media.

Mr. Kassam first pointed out that shocking attacks of this nature were not isolated to Cologne, but happened in “every major Germany city” as well as in Switzerland, Sweden, Finland and France on that one night alone.

Next, he addressed the comments of the interior minister for the German state of North Rhine-Westphalia — who said that, “what happens on the right-wing platforms and in chat rooms is at least as awful as the acts of those assaulting the women” — and those who derided right wing commentators for “speculating” about the attacks.

Mr. Kassam pointed out that, “The speculation has come from the side defending the uncontrolled mass migration. They were the ones who said ‘no’ [the attackers] are not new arrivals.

“Well, new information has come out in the course of the last 24 hours – 14 of those arrested in Cologne for these sexual assaults on New Year’s Eve were recent Syrian migrants; the one that wasn’t was a recent Afghan migrant”, Mr. Kassam explained.

“The German public, the European public at large, and the American public… discussing this are actually being more kind, and more generous to the perpetrators”, he said. 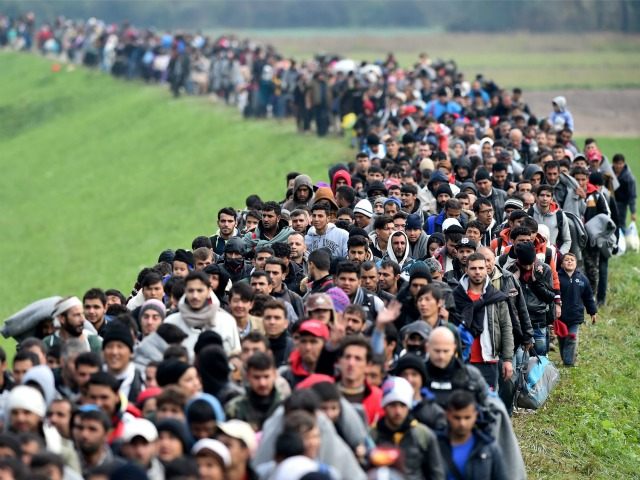 RIGONCE, SLOVENIA – OCTOBER 23: Migrants are escorted through fields by police as they are walked from the village of Rigonce to Brezice refugee camp on October 23, 2015 in Rigonce, Slovenia.

As conversation rolled on, it was said that German Chancellor Angela Merkel has “sown the seeds of destruction for her own country” as the official government forecast for so-called asylum seekers arriving in Germany has risen again to 1.5 million this year after Mr. Merkel suspended the Dublin Agreement in August 2015, and invited all Syrians to Europe.

In one documented case, one of the Cologne sex attackers shouted: “I am Syrian, you have to treat me kindly! Mrs. Merkel has invited me!” at his victims.

Mr. Hannity asked again the question with which he started, and concluded that some of, but not all, of the Syrian and Muslim migrants coming into Europe at present have values that are not only contrary to American values, but the very “antithesis”.

“But there is no way to differentiate”, it was said.

Asking Mr. Kassam directly what Americans can learn from mistakes made this side of the Atlantic, the Breitbart London editor warned Americans not to elect Hillary Clinton as president.

“Merkel isn’t the only dumpy old hag thats for mass migration… If Hilary is elected, you can see her doing exactly what Angela Merkel has done”, he said.

He pointed out the Chancellor Merkel’s unprecedented mass migration policy was passed by her ‘conservative’ Christian Democrat party. “Can you imagine what a left wing party would do in the United States of America?”