An Egyptair domestic flight from Alexandria to Cairo was hijacked on Tuesday and landed in Cyprus, Egyptian officials said.

Everyone is now off the plane and the hijacker is in police custody.

Official sources at EGYPTAIR declared the release of all the hostages and the arrest of the hijacker. #EgyptAir

One grinning passenger posed for a SELFIE alongside #EgyptAir hijacker https://t.co/gj4teScAeR pic.twitter.com/mj7mgE6v1h

Its over. The #hijacker arrested. #LarnacaAirport # Egyptair

Video of Man Jumping from Aircraft:

Picture: Man Climbs Out of Aircraft: 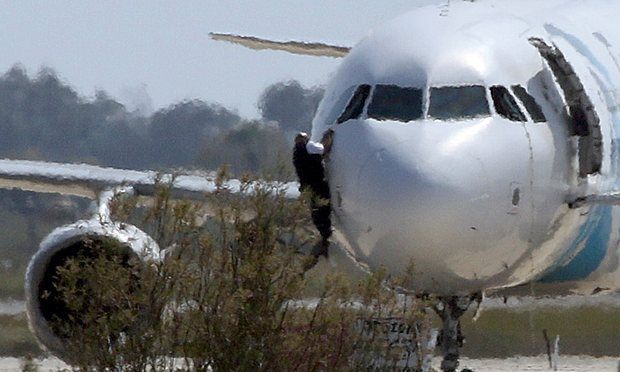 The BBC is reporting that one person escaped the plane through the window of the cockpit.

EgyptAir Is Sending Another Plane to Pick Up the Released Passengers:

BBC: Downing Street “Aware of Speculation” About Britons on Board: 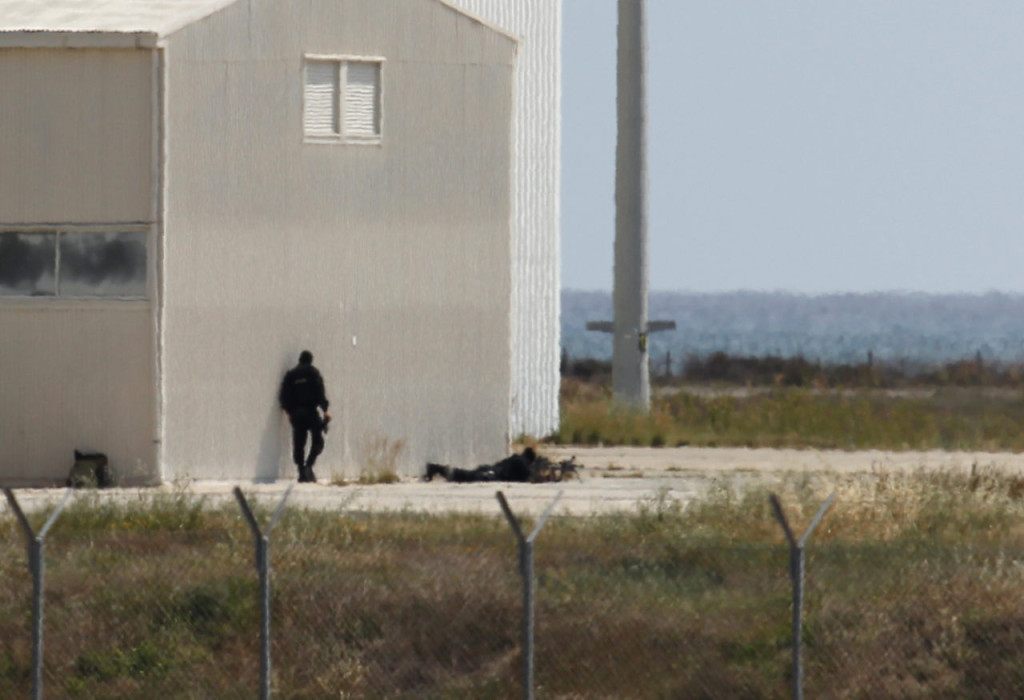 Second AirEgypt Plane Not Allowed to Take Off:

Seven People Still On Board:

Egypt’s foreign ministry says 4 passengers and 3 crew are still on board the aircraft.

Now there are claims the hijacker is asking for release of prisoners in Egypt:

Ruth Michaelson, who quoted the officials, responds that “no one said it was the spokesperson”.

No one said it was the spokesperson. https://t.co/foKnSr3rSE

Hijacker ‘Has Made No Concrete Demands’:

Egypt transport minister says #Egyptair hijacker has not made any concrete demands so far. A lot of conflicting info

Local media now claim this is the hijacker’s name, although this remains unconfirmed.

Explosive Belt ‘Dealt With As If Real’:

Egypt’s aviation minister told a press conference he did not know if explosives were real: “We didn’t know if it was real, but we dealt with it as if it was real.” 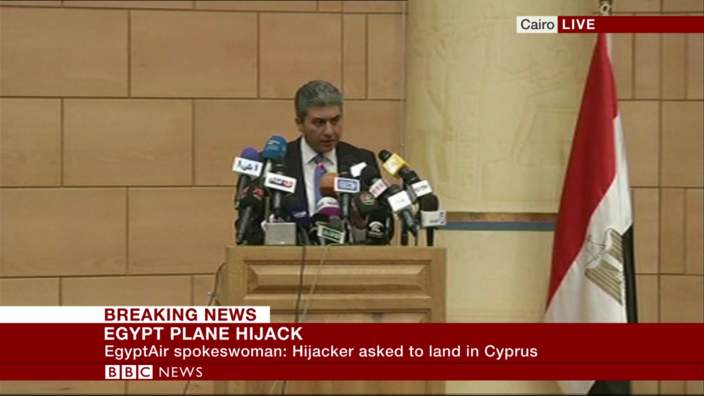 He told BBC Arabic: “We did not know what was going on. We got aboard the plane and we were surprised that the crew took all our passports, which is unusual for a domestic flight. After a while we realised that the altitude is getting higher. Then we knew we were heading to Cyprus. At first the crew told us there was a problem with the plane, and only later we knew it was hijacked.”

Apparently Ibrahim Samaha, named as hijacker, has been released as a hostage. He's not the hijacker. #EgyptAir

Two Britons Still On Board:

hijacked #egyptair plane being kept 2 perimeter of #larnaka airport: 2 britons, 1 italian, 1 irishman sd 2 b among those still on board 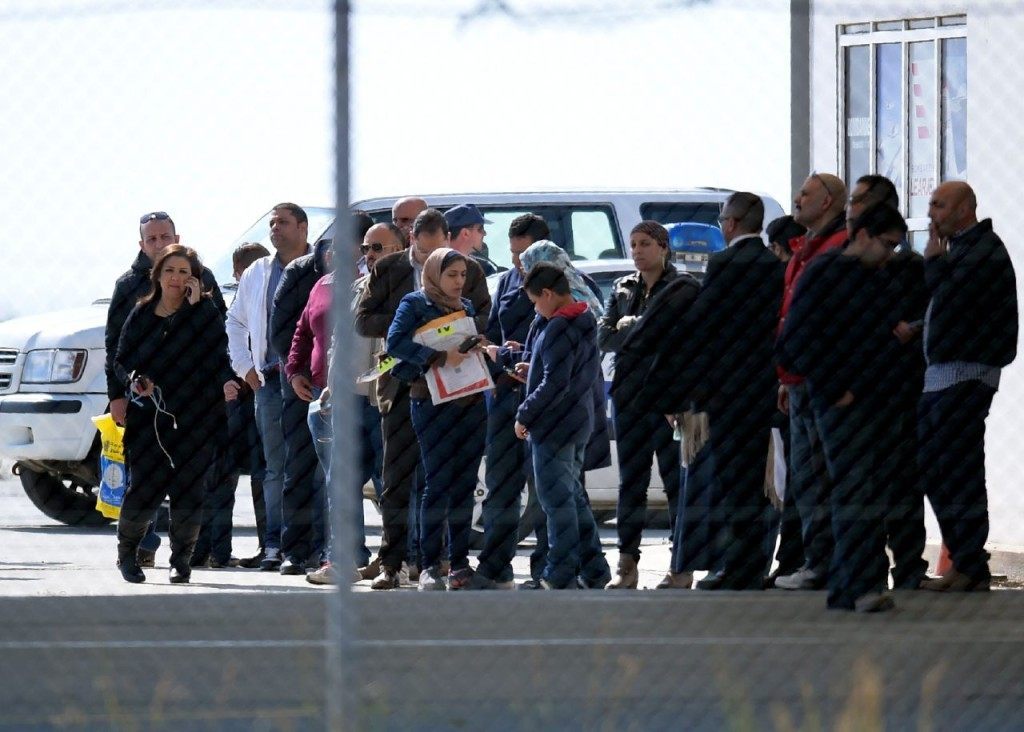 Various reports are now naming the hijacker as Ibrahim Abdel Tawwab Samaha, a professor of veterinary medicine at Alexandria University.

The BBC quotes the head of Alexandria’s Borg El Arab Airport as saying eight Americans, four Britons, two Belgians, one Italian, four Dutch and 30 Egyptians were on board the flight.

Egypt Foreign Ministry: He’s Not a Terrorist, He’s an Idiot:

The Guardian is quoting officials at Egypt’s ministry of foreign affairs as saying: “He’s not a terrorist, he’s an idiot. Terrorists are crazy but they aren’t stupid. This guy is.”

#cyprus pres nikos anastasiades confirms tt terrorism not behind hijacking but love-sick romeo. "it's 2 do w a woman!"

Those asking where the previous image of #EgyptAir hijacker #IbrahimSamaha was from – it is from #Egypt's State TV pic.twitter.com/J1qo8dknE3

– It must have been love

Footage of Passengers Being Released:

Reports Four of the Foreign Passengers are British:

UPDATE: Egypt Air Says All Passengers Freed Except 5 and Crew:

EgyptAir said negotiations had resulted in the release of all passengers on the hijacked Egyptian plane except for five foreigners and the crew.

“The negotiations with the hijacker have resulted in the release of all the plane passengers with the exception of the crew and five foreigners,” the airline said in a statement.

The pilot of the plane was threatened by a passenger strapped with explosives, Egypt’s Civil Aviation Ministry said.

The Cyprus Broadcasting Corporation reported that 55 passengers were on board and a crew of seven. The hijacking occurred in Cyprus’s flight information region and the airliner was diverted to Larnaca.

The plane was an Airbus 320, Egypt’s aviation ministry said.

The ministry in a statement that pilot Omar al-Gammal had informed authorities that he was threatened by a passenger who possessed a suicide belt and forced him to land in Larnaca.

CYBC said the airplane was parked at an apron at Larnaca airport. The hijacker asked police to back away from the aircraft, it said.

Israel scrambled warplanes in its airspace as a precaution in response to the plane hijacking, according to an Israeli military source.