Balkan state and European Union neighbour Bosnia is a “safe-house for radicals” and enjoys a “stable terrorist infrastructure” according to a major German news magazine.

From a population of just 3.8 million an estimated 300 individuals have left 45-per-cent-Muslim Bosnia and Herzegovina, the former Yugoslavian republic, to join the Islamic State. The only nation which has sent more citizens per-capita to the Islamic State is Belgium. 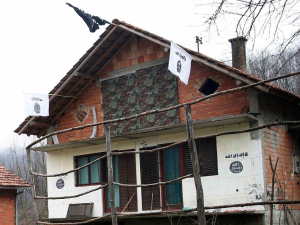 Not only is the nation a feeder state to ISIS, but it is also an exporter of terror and munitions to Western Europe. A profile by German news magazine Spiegel reports findings by the Bosnian security ministry which showed weapons used to attack the Charlie Hebdo offices and the Bataclan concert hall, both in Paris, had come from the nation.

Now quoting a former National Security Agency (NSA, U.S.A.) officer and expert on the region, the Spiegel article has cast Bosnia as a “sanctuary” for Islamic State fighters and leaders. John Schindler told the magazine that Bosnia is now “considered something of a ‘safehouse’ for radicals”.

The existence of whole areas of the country where Western norms have failed to prevail but are instead run as outposts of the Islamic State have received attention from the European Union and world media, but are officially denied by the Bosnian government.

Breitbart London reported on one such village after its discovery in 2015, a Bosnian settlement where extreme Wahabbist Muslims had been buying up land and training fighters for the Islamic State. A man from the village attacked the American embassy in Sarajevo in 2011 with a machine gun.

A local said of the isolated houses located in dense woodland: “We regularly hear gunshots coming from the woods up there for long periods at a time. It happens every week.

“I don’t know what they are doing, whether it is target practice or something like that, but it happens regularly”.