The people of Paris have come together in a day of mourning to mark the one year anniversary of the Islamic terror attacks which claimed the lives of 130 people. 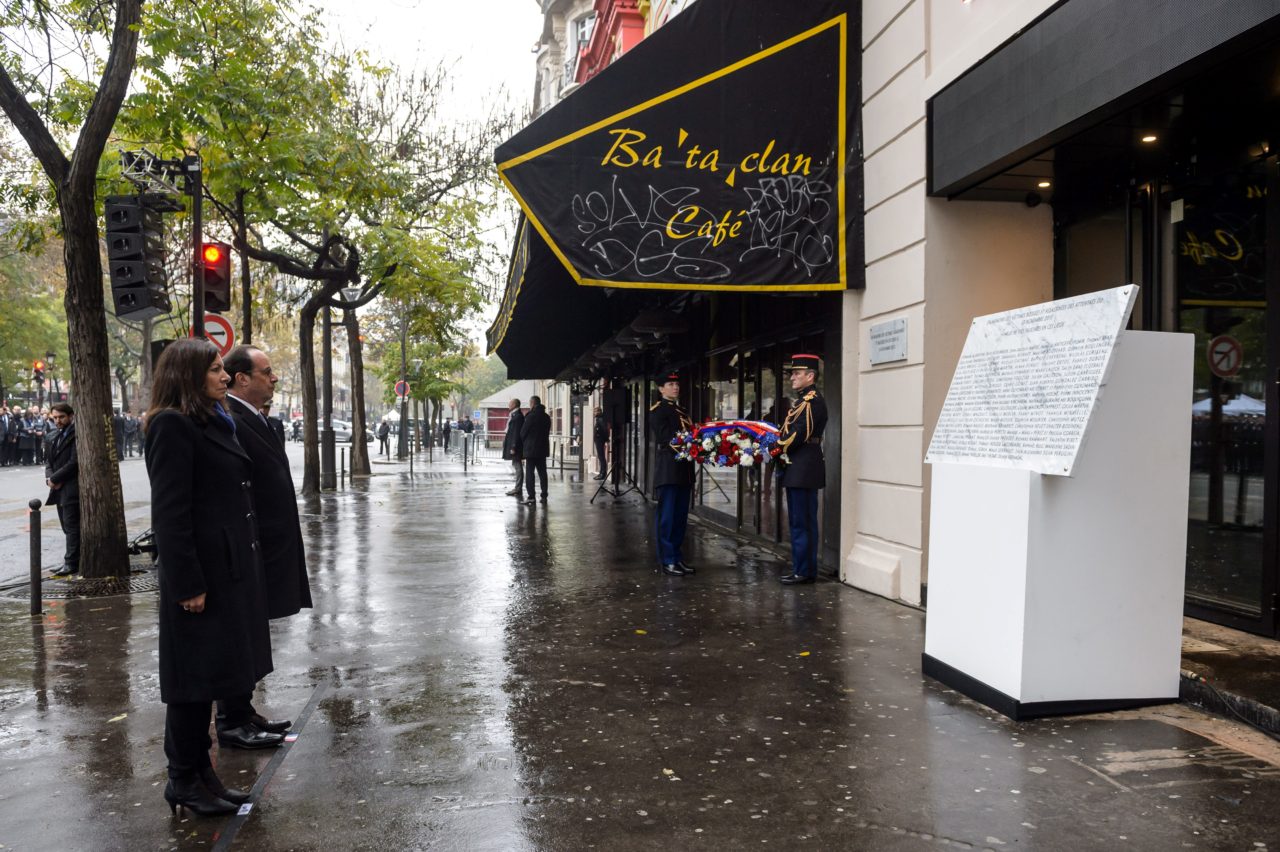 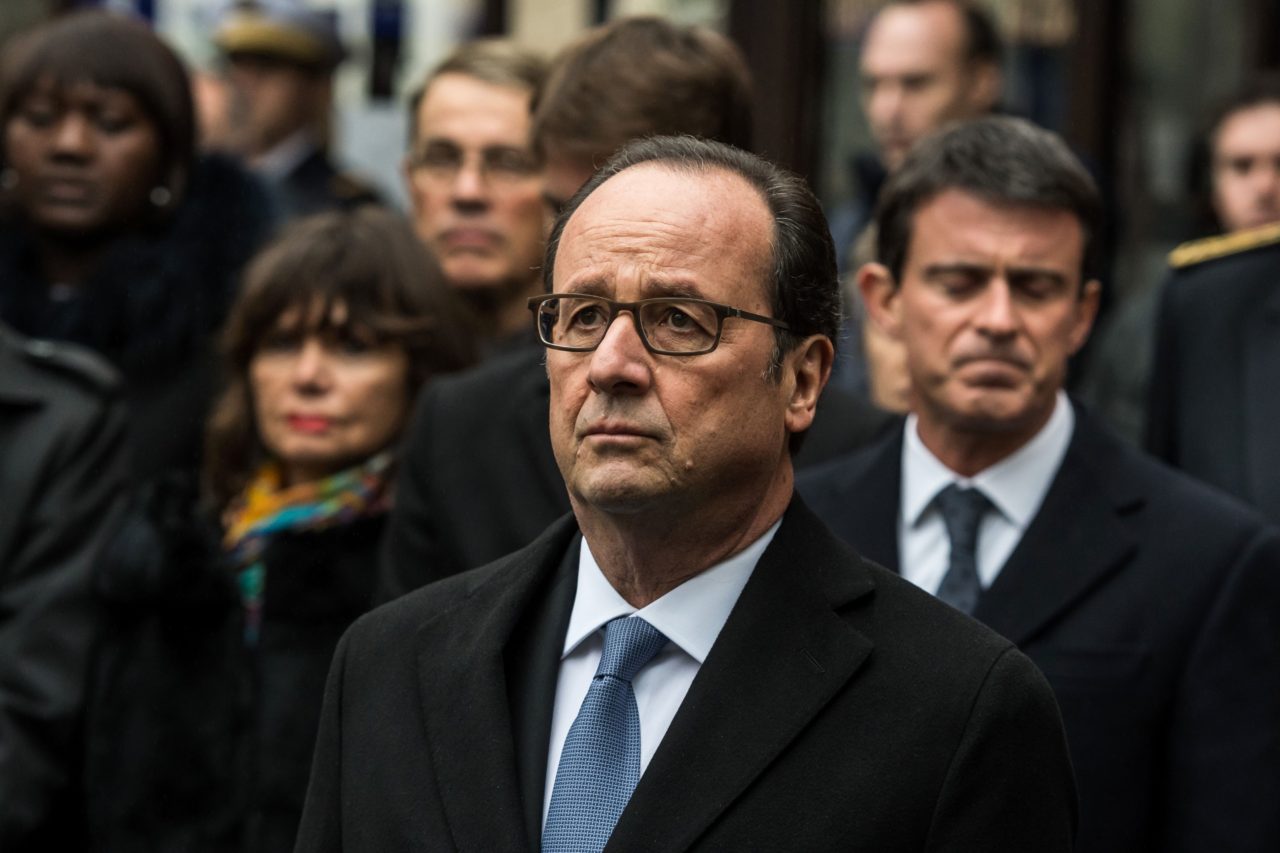 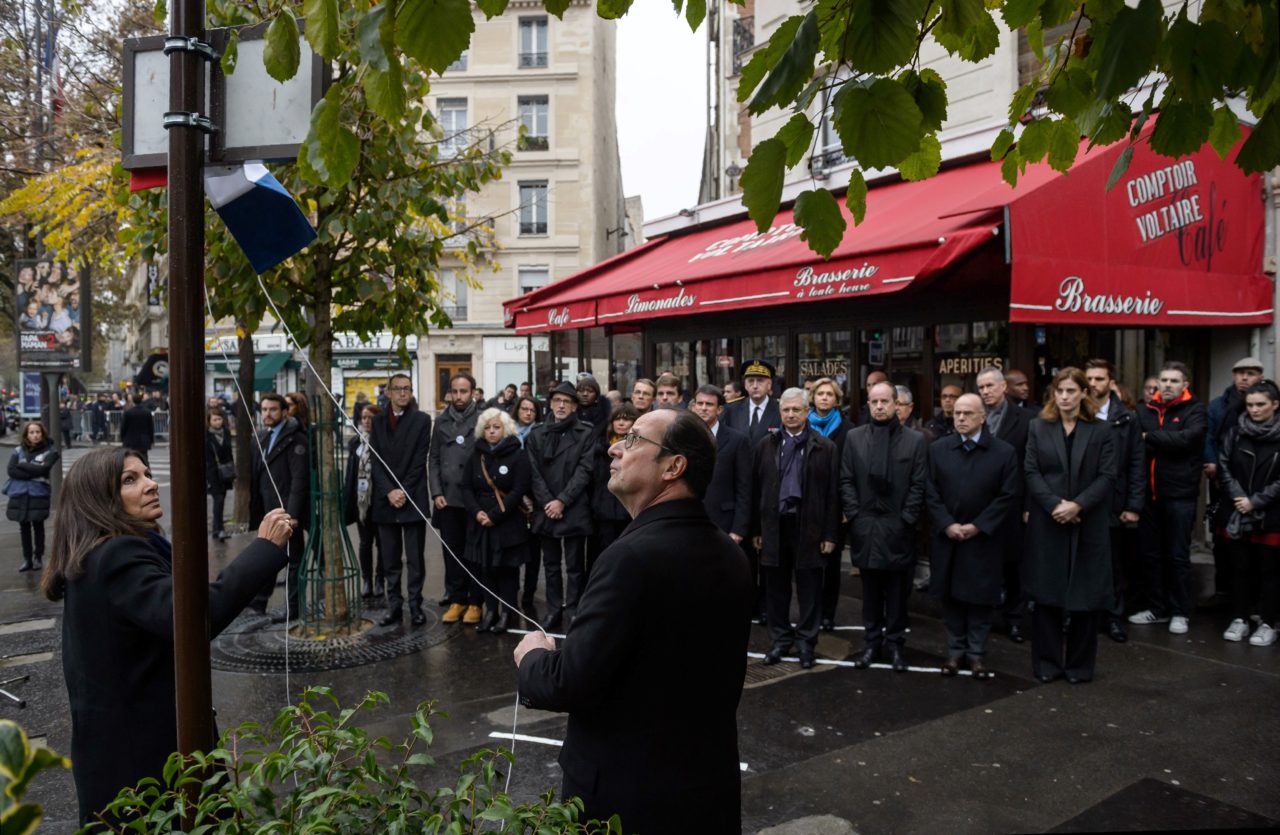 French President Francois Hollande and Paris Mayor Anne Hidalgopay their respects as they unveil a commemorative plaque in front of the Comptoir Voltaire cafe at the Boulevard Voltaire in Paris. Photo credit should read CHRISTOPHE PETIT TESSON/AFP/Getty Images. 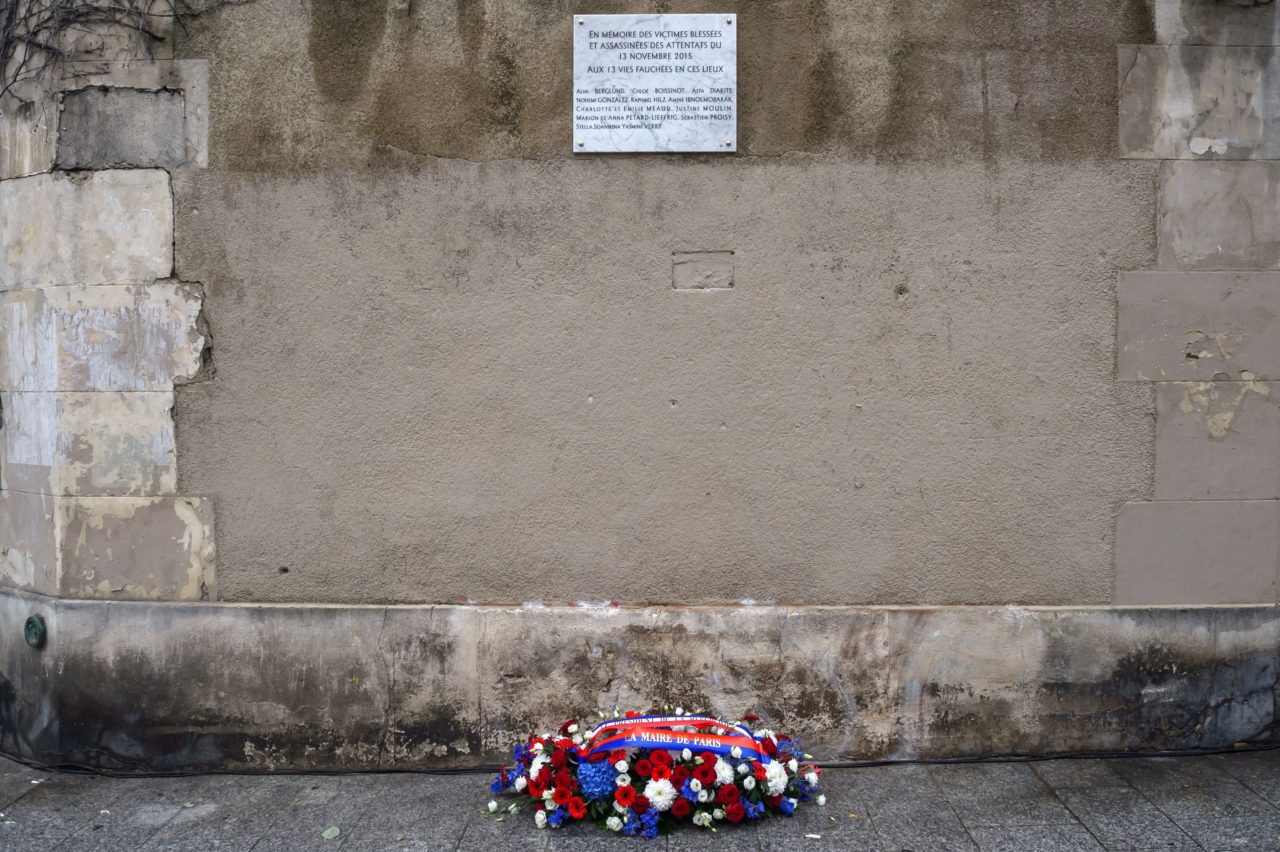 A wreath laid by French President is seen under a commemorative plaque in front of Le Petit Cambodge and Le Carillon restaurants at the junction of Rue Alibert and Rue Bichat in Paris. Photo: CHRISTOPHE PETIT TESSON/AFP/Getty Images. 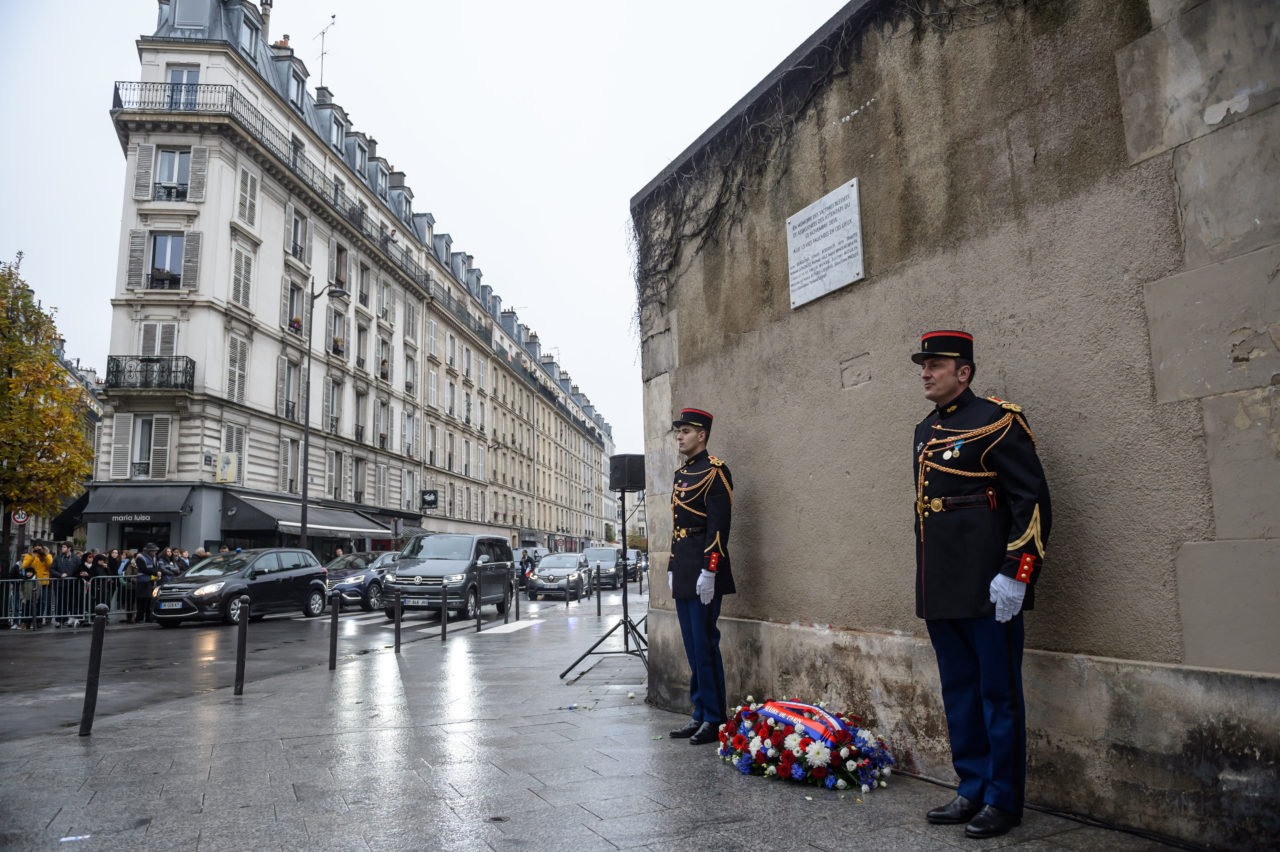 French Republican guards stand next to a wreath and a commemorative plaque unveiled by French President, in front of Le Petit Cambodge and Le Carillon restaurants at the junction of Rue Alibert and Rue Bichat in Paris. Photo: CHRISTOPHE PETIT TESSON/AFP/Getty Images.

The Stade de France, where France was playing Germany, bore witness to the first attack by suicide bombers, resulting in the death of Manuel Dias, a Portugese immigrant to France.

At the commemorative event Dias’ son Michael said his father was “living proof that integration is possible, necessary” to end the violence carried out by those who felt excluded.

Learning to live again following the death of his father at the hands of terrorists was “a personal challenge, but it concerns us all,” Dias said, crediting his father, who came to France at 18, with life lessons like the need for education.

“It is by knowledge, by intelligence that the children of tomorrow can stop humiliating themselves as cannon fodder in the service of criminal, mafia-style interests … as is the case today,” he said. “[They are] incapable of reflection, thinking about the world and expressing the unease and social exclusion they feel.” 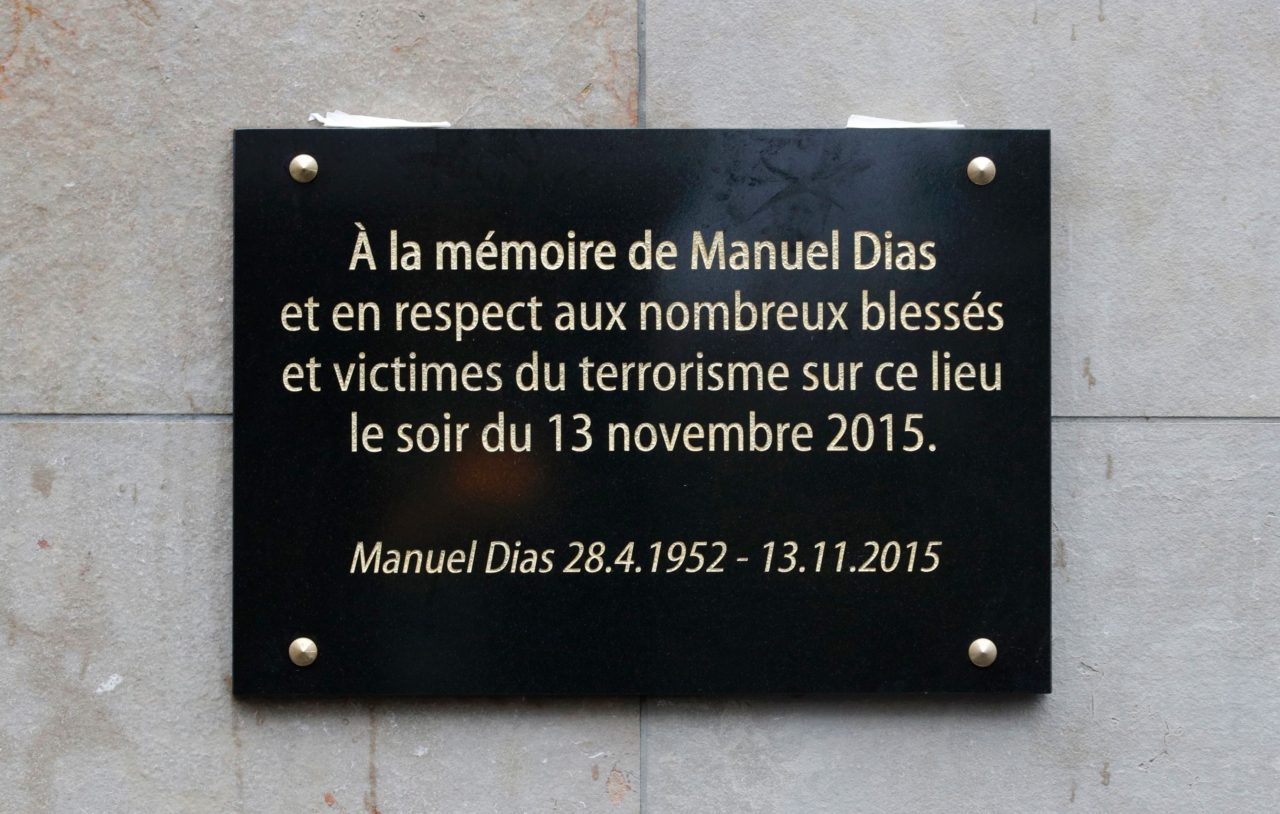 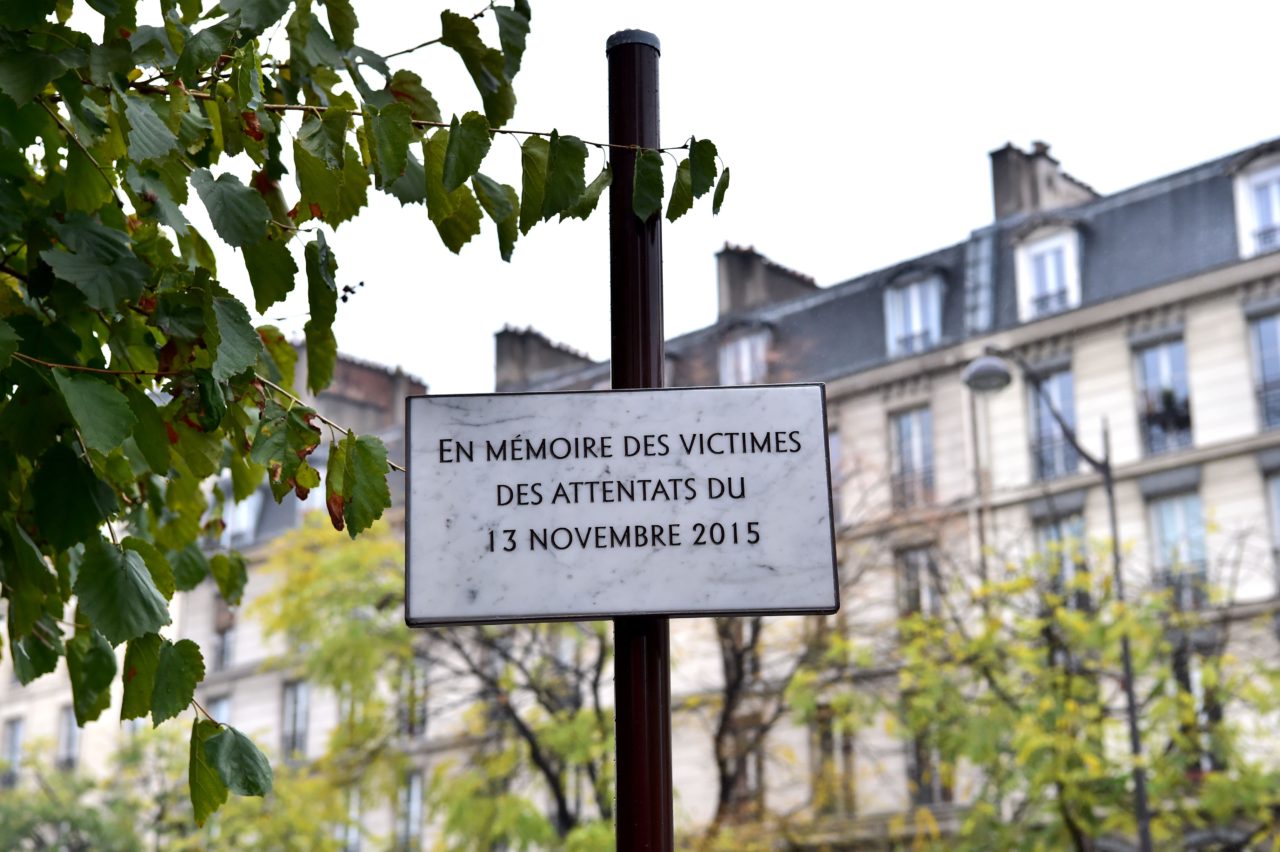 A commemorative plaque reading “In memory of the victims of the attacks of November 13, 2015”, placed near the Cafe Comptoir Voltaire on Boulevard Voltaire, Paris. Photo: CHRISTOPHE ARCHAMBAULT/AFP/Getty Images. 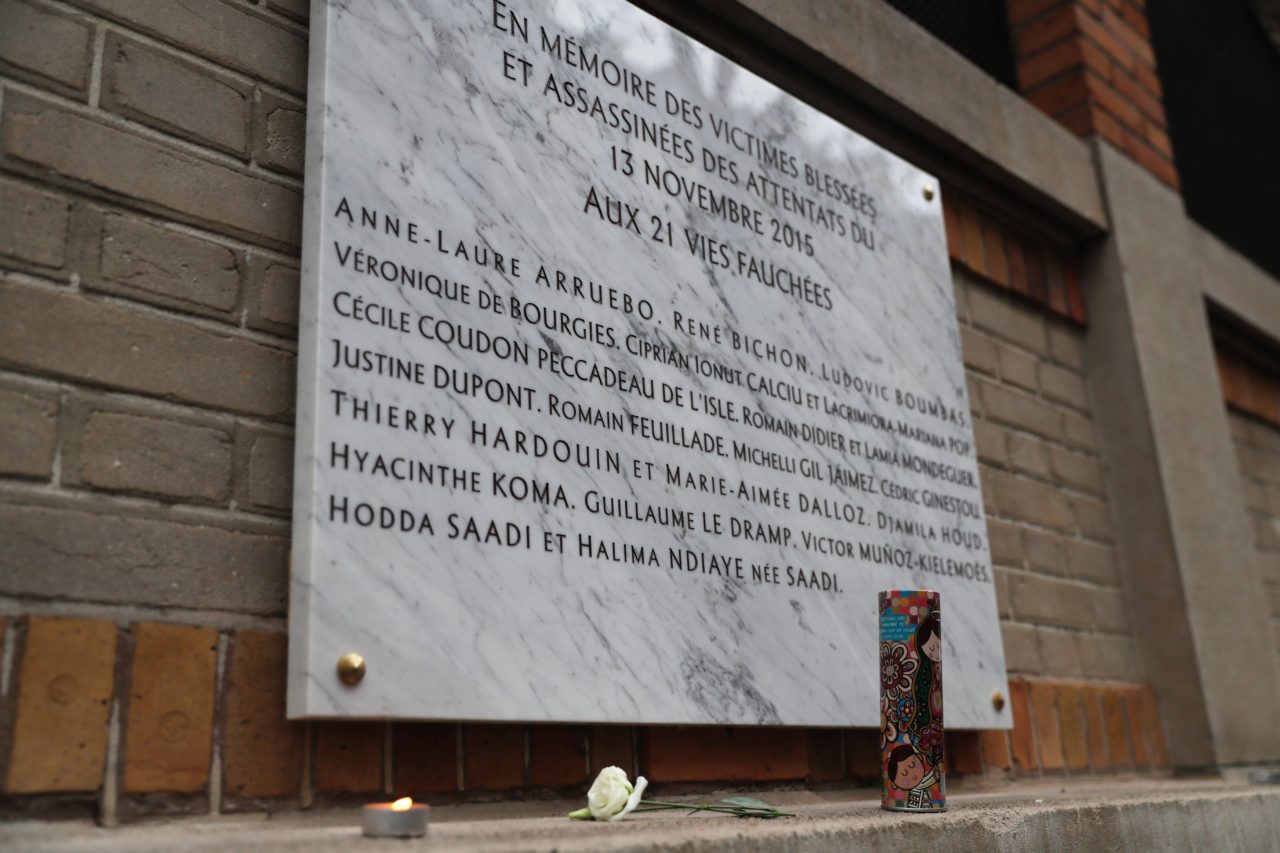 Tributes lie under a commemorative plaque reading “In memory of the injured and killed victims of the attacks of November 13, 2015 – to the 21 lives taken”, placed next to the La Belle Equipe bar and restaurant in Paris. Photo: THOMAS SAMSON/AFP/Getty Images. 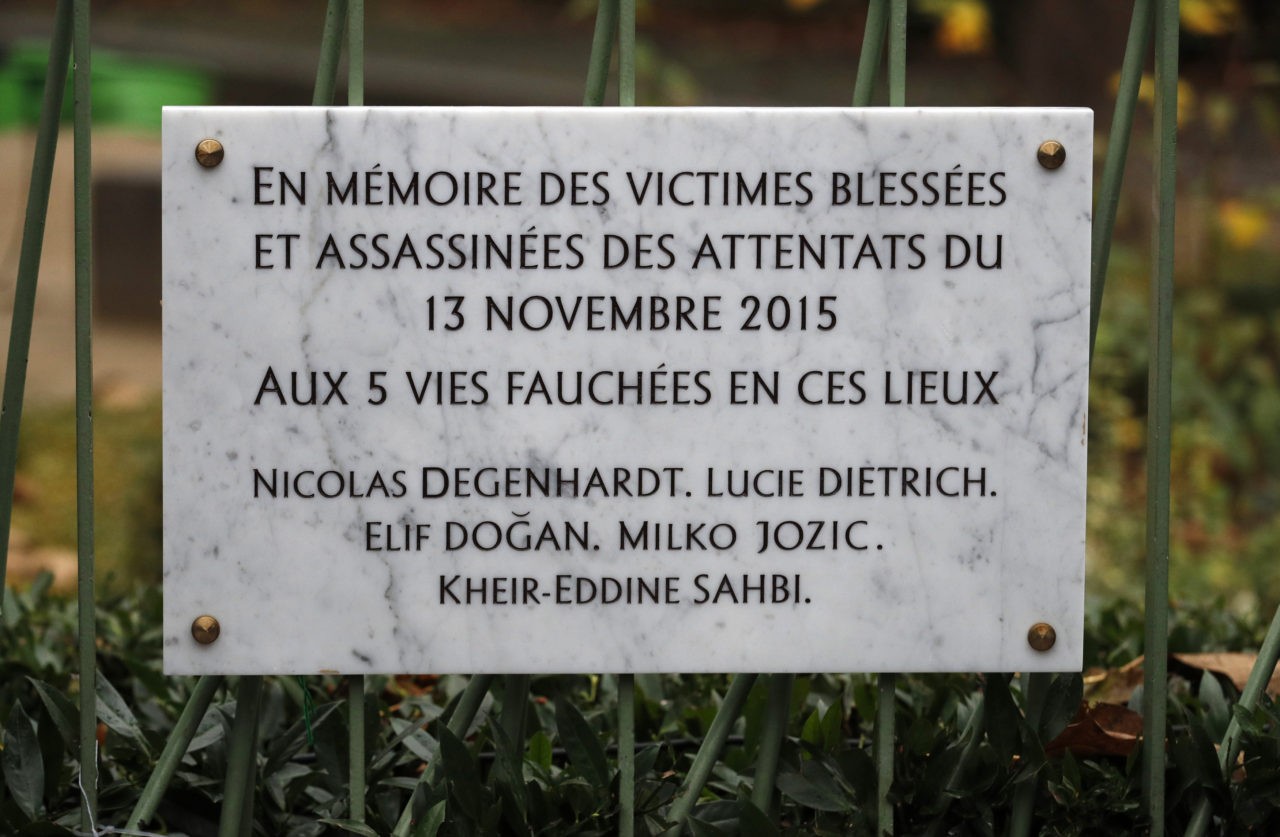 “In memory of the injured and killed victims of the attacks of November 13, 2015 – to the five lives taken in these places.” The plaque is placed next to the Cafe Bonne Biere and the Rue de la Fontaine au Roi street in Paris. Photo: PHILIPPE WOJAZER/AFP/Getty Images.

A sign scrawled and posted near the Bataclan, where 89 people lost their lives to three gunmen reads: “Love for all, hate for no one”. But while it captures the sense of defiance shared by many, some residents of the lively neighborhood are still trying to heal.

“We always have this fear that weighs heavily in our hearts. We always try to be careful. And every time we pass by here, we think of them,” Sabrina Nedjadi said.

“I am afraid for my children, when they take the Metro. When my son goes to work, I am afraid. When I get into a Metro I am afraid.”

As a show of strength, posters created by the city of Paris have been placed all across the city featuring the city’s motto: ‘Fluctuat nec mergitur’ – a Latin phrase meaning “Tossed but not sunk”. 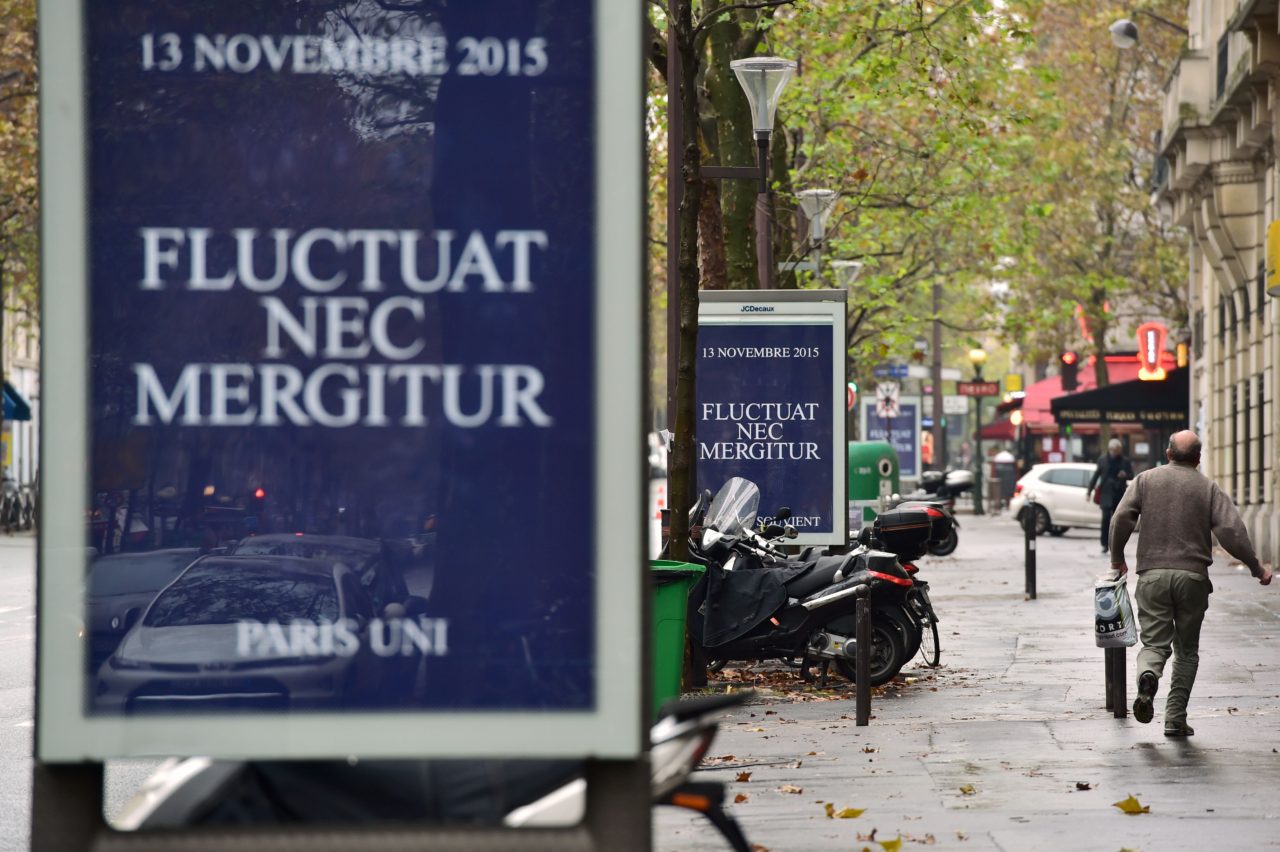 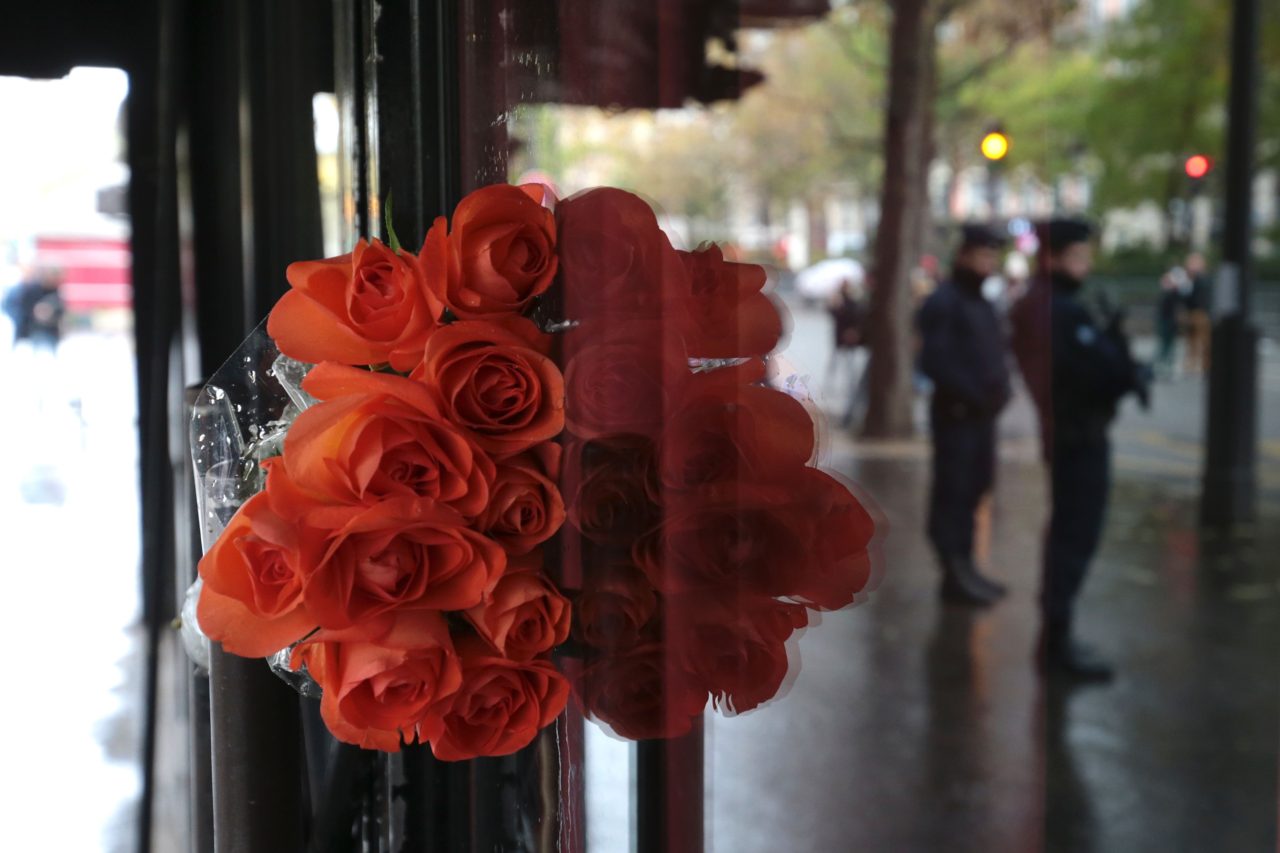 The reflection of armed policemen can be seen in the front door of the Bataclan Cafe in Paris where flowers were laid after a ceremony marking the first anniversary of the Paris terror attacks. Photo: JOEL SAGET/AFP/Getty Images. 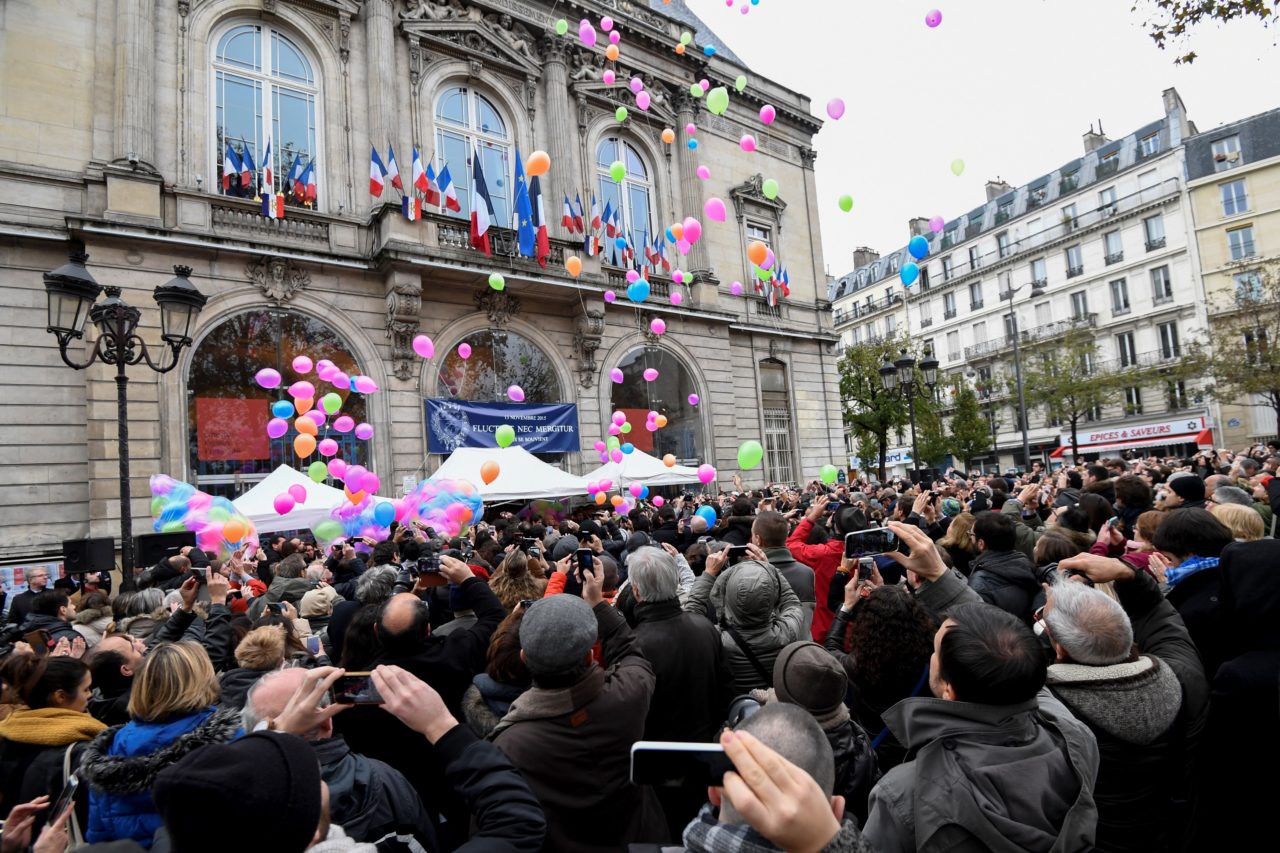 People release balloons in front of the city hall of the 11th arrondissement of Paris, on November 13, 2016, to mark the first anniversary of the Paris terror attacks. Photo: ALAIN JOCARD/AFP/Getty Images

As a sign of hope, several hundred balloons were released from the nearby town hall following a sombre service, where Mr Hollande was in attendance. Lanterns were floated along the Canal Saint-Martin as dusk fell.

Hannah Schumann, a nurse, said: “everybody is emotional. I’m crying.”