A former government minister has said Russia could be guilty of “a brazen act of war” if they attempted to assassinate a former spy in Salisbury, whilst a Labour MP called Russia a “terrorist” state.

The strong words used in the House of Commons reflect the growing alarm surrounding the suspected attempted murder, which police revealed Wednesday night was committed using a sophisticated, rare, and deadly nerve agent.

Officers are now guarding the cemetery where the wife of former Russian spy Sergei Skripal, 66, is buried after it was announced her premature death and the death of the couple’s son would also now be investigated.

Mr. Skipal and his daughter, 33, remain in hospital in a critical condition after falling ill on Sunday.

Anti-terror police are now leading the investigation, hundreds of officers and officials are now working on the case, and the spy’s house, around two miles from the grave, has also been cordoned off.

Generally, the level of technical accomplishment required for the creation and storage of nerve agents limits their use to the governments of developed nations, but they have been used in terror attacks such as the Tokyo Metro in 1995.

Speaking in the Commons Thursday, former Tory minister Sir Edward Leigh said it would be “a brazen act of war” if Russia was behind an attack, and that initial evidence implicating them was “very strong”.

Addressing the House, Home Secretary Amber Rudd told MPs the attack was a “brazen and reckless act” conducted in the “most cruel and public way”, but cautioned against speculating about the perpetrators.

“The use of a nerve agent on UK soil is a brazen and reckless act. This was attempted murder in the most cruel and public way. People are right to want to know who to hold to account.

“But if we are to be rigorous in this investigation, we must avoid speculation and allow the police to carry on their investigation.

“We are committed to doing all we can to bring the perpetrators to justice, whoever they are and wherever they may be.

“The investigation is moving at pace and this Government will act without hesitation as the facts become clearer.” 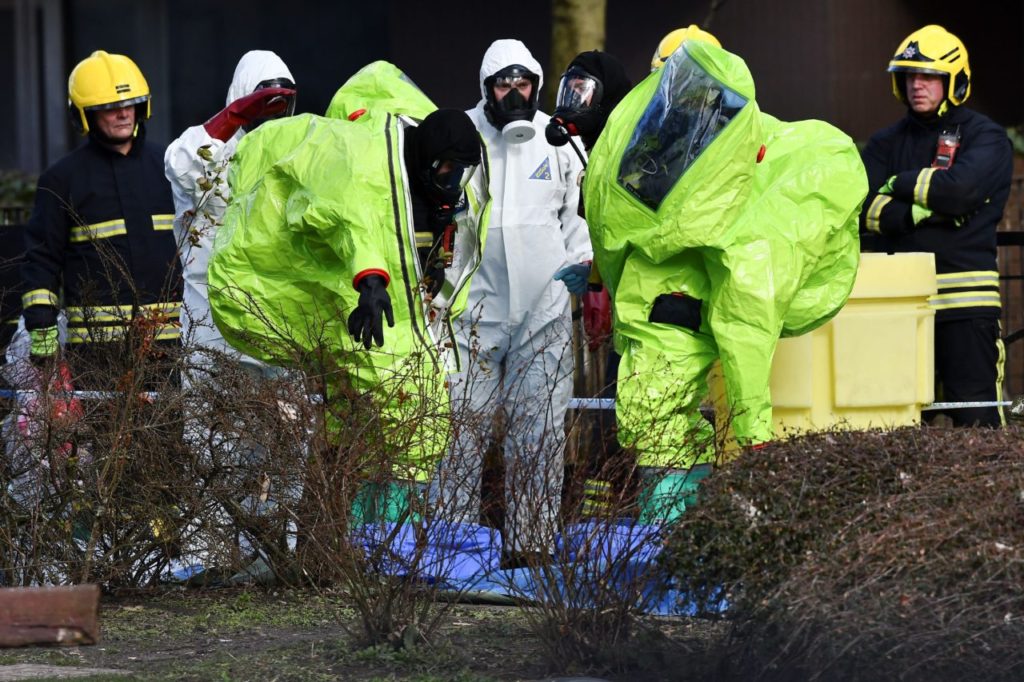 Members of the fire brigade are helped out of their green biohazard suits by colleagues in white protective coveralls after an operation to re-attach the tent over the bench where a man and a woman were found in critical condition sparking a major incident on March 4 at The Maltings shopping centre in Salisbury, southern England, on March 8, 2018 after the tent became detached. (BEN STANSALL/AFP/Getty)

Mr. Skripal came to the UK as part of a spy swap, after he was jailed in Russia for working for British intelligence.

Speculation has led some to point to apparent similarities with the asassassinationf Alexander Litvinenko, another former Russian agent, who was killed with a radioactive poison in 2006.

A report found his death was likely to have been approved by Russian President Vladimir Putin.

Labour MP Yvette Cooper, the chairman of the Home Affairs Select Committee, wrote to Ms. Rudd on Tuesday calling for a review of 14 other cases, which journalists have claimed could be linked to Russia.