St Mary’s Catholic Church in Great Yarmouth was “desecrated” in a satanist attack for the second time in four months.

CCTV caught footage of a man setting small fires in the church on Tuesday before removing a sacred icon from the altar and replacing it with a satanic picture, then trying to burn the Christian object, reports the BBC.

Norfolk Police are examining the video footage and are treating the incident as a religiously aggravated hate crime.

A similar attack occurred four months ago in the 19th-century Grade II listed building when someone placed a satanic picture at the foot of the cross.

Parish priest Father Anthony Nwankwo said: “Our church and sanctuary has been desecrated.”

“I was shocked and saddened when I discovered what had happened. When I looked at the altar I saw this picture of something satanic. My immediate thought was to get some holy water and use it with prayer to nullify what the person had done. 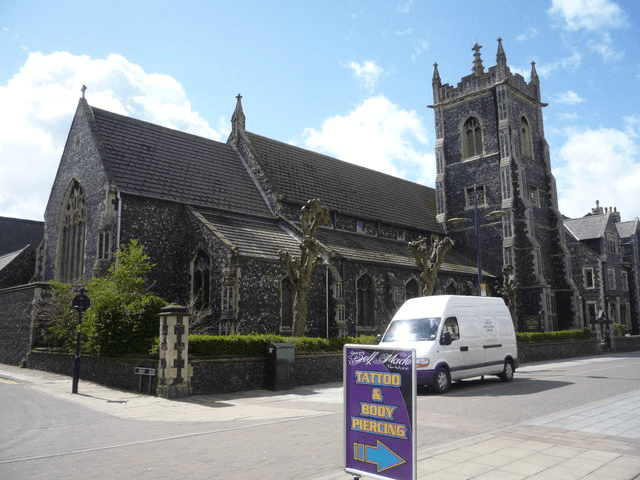 “It is a clear attack on the church and our religion which is not acceptable. If people do not like what we do here they can just stay away. Such an attack on our church can never succeed.

“Our parishioners are shocked and sad about what has happened but I was very encouraged by the number of people who came to Mass this morning in support,” Fr. Anthony added.

Bishop of East Anglia Alan Hopes was defiant against the attack on his faith and said that churches would remain open to parishioners and the public for prayer, but said he was “saddened” that the attack occurred so close to Good Friday.

Parishioner of 33 years and parish council member Brian Lafferty said: “I have never seen anything like it before and it is quite disturbing really, especially in this day and age.”

Last year ahead of the Easter Holy Week, Breitbart News reported that Christians were by far the most persecuted group in the world, according to a study from the Turin-based Center for Studies on New Religions (CESNUR).

Christians are most vulnerable to violence in Muslim-majority countries such as Pakistan, Egypt, and Syria, but Christians in Europe have also found themselves targetted in recent years.

France has seen anti-Christian attacks rise by 245 per cent since 2008, Christianophobic hate crimes tripled in five years in Sweden, and German politicians were “alarmed” to find nearly 100 attacks were committed against Christians and Christian places of worship in 2017.