A radical group linked to the Islamic State has threatened an attack on the damaged cathedral of Notre Dame, or possibly another historic Christian building.

The SITE Intelligence Group Enterprise counter-extremism organisation, which reported on the threat, appears to believe it was targetted at the Parisian cathedral — although it is possible “wait for the next” could refer to an attack on another Christian building.

The French authorities do not believe the Notre Dame fire resulted from arson or terrorism at present, saying it was likely an accident.

Islamic extremists were quick to celebrate it, however — including al-Munatsir, which published an earlier image of the burning cathedral with the caption “Have a nice day”.

The threats come as France honours the Paris fire brigade, the Pompiers de Paris, who were able to save much of the cathedral from the flames, despite the destruction of its spire and ancient roof timbers.

“The country and the entire world were watching us and you were exemplary,” French president Emmanuel Macron told hundreds of firefighters at the Elysée Palace, where they were gathered so he could pay tribute to them on behalf of the nation.

“You were the perfect example of what we should be,” he added, saying they would be awarded medals of honour for their “courage and devotion”.

Anne Hidalgo, the left-wing Paris mayor, also praised the firefighters’ “boundless courage”, saying they had “saved part of ourselves” by preventing the historic cathedral from being entirely consumed. 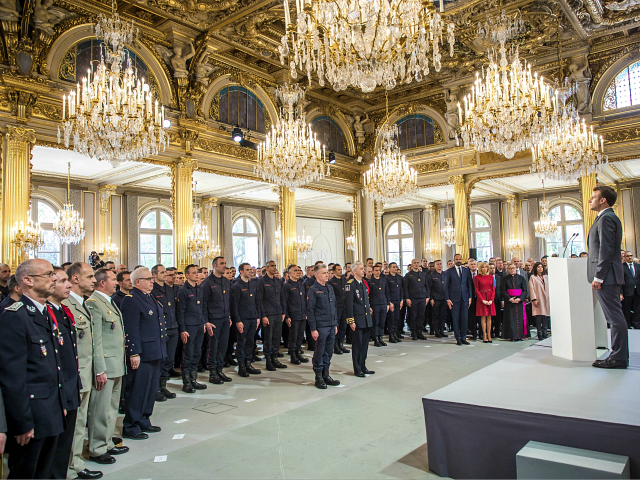