Nearly half of all Britons polled said they backed employers demanding staff be vaccinated against the Chinese coronavirus in order to keep their jobs.

A YouGov poll from Tuesday found that 49 per cent of respondents said that workplaces should be allowed to “insist that their employees get the coronavirus vaccine when they are offered it”. Only 36 per cent said that “they should not be allowed to insist”. 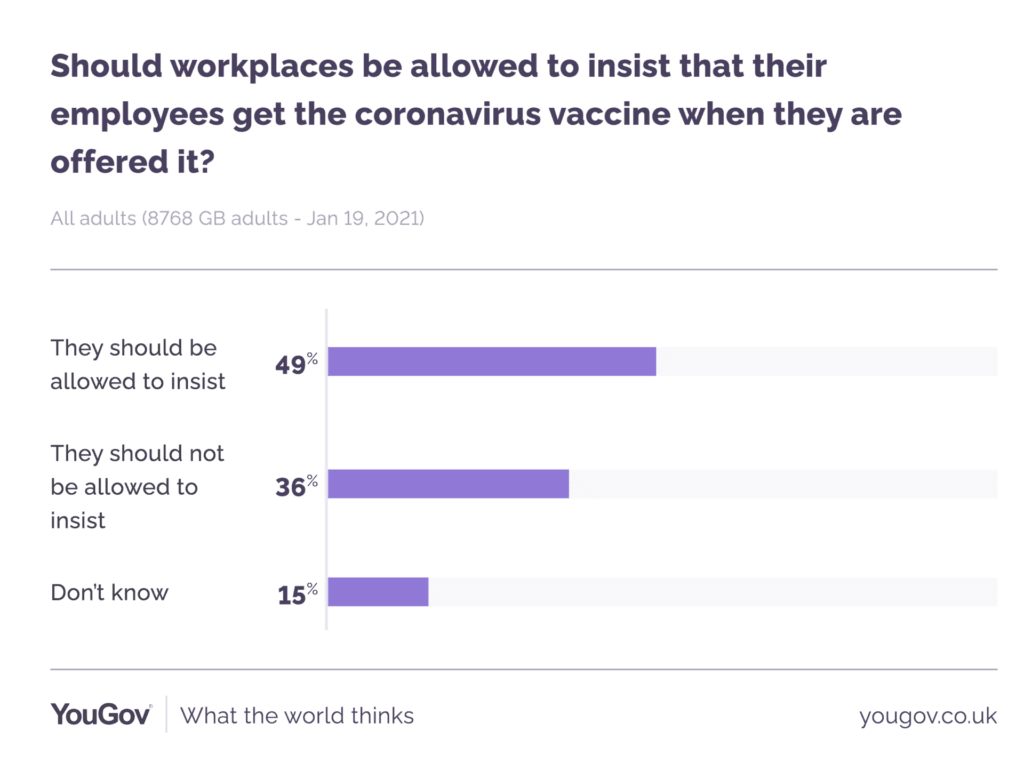 The survey was conducted after billionaire Remainer and UK plumbing tycoon Charlie Mullins announced a “no vaccine, no job” policy for his employees, contractually mandating inoculations once their availability becomes widespread.

“We won’t be employing people in the future unless they’ve got a vaccine,” Mr Mullins had said last week. However, employment lawyer Jonathan Chamberlain said that the Pimlico Plumbers founder would likely face lawsuits if he tries to force employees to have medical treatments.

The poll findings are largely in line with responses from the last several months to other surveys that revealed Britons not only backing the government’s strict crackdown on freedom during the pandemic, but wanting more of it.

Another YouGov study this week found that a plurality of Britons back the government using citizens’ mobile phone data to ensure they are abiding by lockdown rules. Nearly 45 per cent said they backed the expansion of government powers. Responding to a separate question, 76 per cent said they were also in favour of banning handshakes.

While a survey last week revealed that a plurality of Britons (46 per cent) did not think that the police were being strict enough on alleged coronavirus rules breakers, while just over one-quarter (27 per cent) said enforcement had been “about right”. Just 14 per cent said that policing of the lockdown rules had been too strict.

Government ministers have been discussing “immunity certificates” or vaccine passports very early on in the pandemic, and has been giving mixed messages since on whether the government would be engaging health services with possible immunity passports.

Health Secretary Matt Hancock said in April 2020: “We are looking at an immunity certificate. People who have had the disease have got the antibodies and then have immunity can show that and therefore get back as much as possible to normal life.”

Vaccine Minister Nadim Zahawi pledged in December that while the government would never force Britons to have vaccinations, he admitted that private businesses might ban from their premises anyone who cannot prove they have been inoculated.

“We are looking at the technology and of course a way of people informing their GP that they’ve been vaccinated.

“But also I think you’ll probably find that restaurants, bars, and cinemas and other venues — sports venues — will probably also use that system as they’ve done with the [NHS test and trace] app,” Zahawi said.

Senior Minister Michael Gove was quick to state after the remarks that “I certainly am not planning to introduce any vaccine passports and I don’t know anyone else in government who is.”

This month, however, it was revealed that the government was trialling health passports, on smartphone apps, to see if it were possible to track whether patients have had the first or second dose of a vaccine. Responding to the Telegraph report, Mr Zahawi denied that the Johnson administration was planning on introducing “vaccine passports”.