The government has sent two Royal Navy ships to monitor the situation in the waters of Jersey as some 60 French fishing vessels descended on the British Crown Dependency amidst a post-Brexit fishing dispute with France, which has threatened to cut the electricity to the English Channel island.

HMS Severn had previously been used to shadow Russian warships passing through the English Channel. Both Royal Navy vessels are used to monitoring fishing in British waters, with the crew able to board fishing boats to conduct inspections, according to the BBC.

The Jersey government is responsible for its own fishing rights and has determined that only vessels in their waters that have a history of fishing in the area will be granted new, post-Brexit licences. As a Crown Dependency, however, the notionally independent Isle’s foreign affairs are conducted on its behalf by the UK government, however.

The French claim that additional rules had been added to the requirements without notice and were in breach of the UK-EU trade agreement, which includes fishing in British territorial waters.

Confirming the vessels would be heading to Jersey, which is just 14 miles off the coast of France, a spokesman for Number 10 said that Prime Minister Boris Johnson had expressed his “unwavering support” for the Channel island, saying that “any blockade would be completely unjustified”. 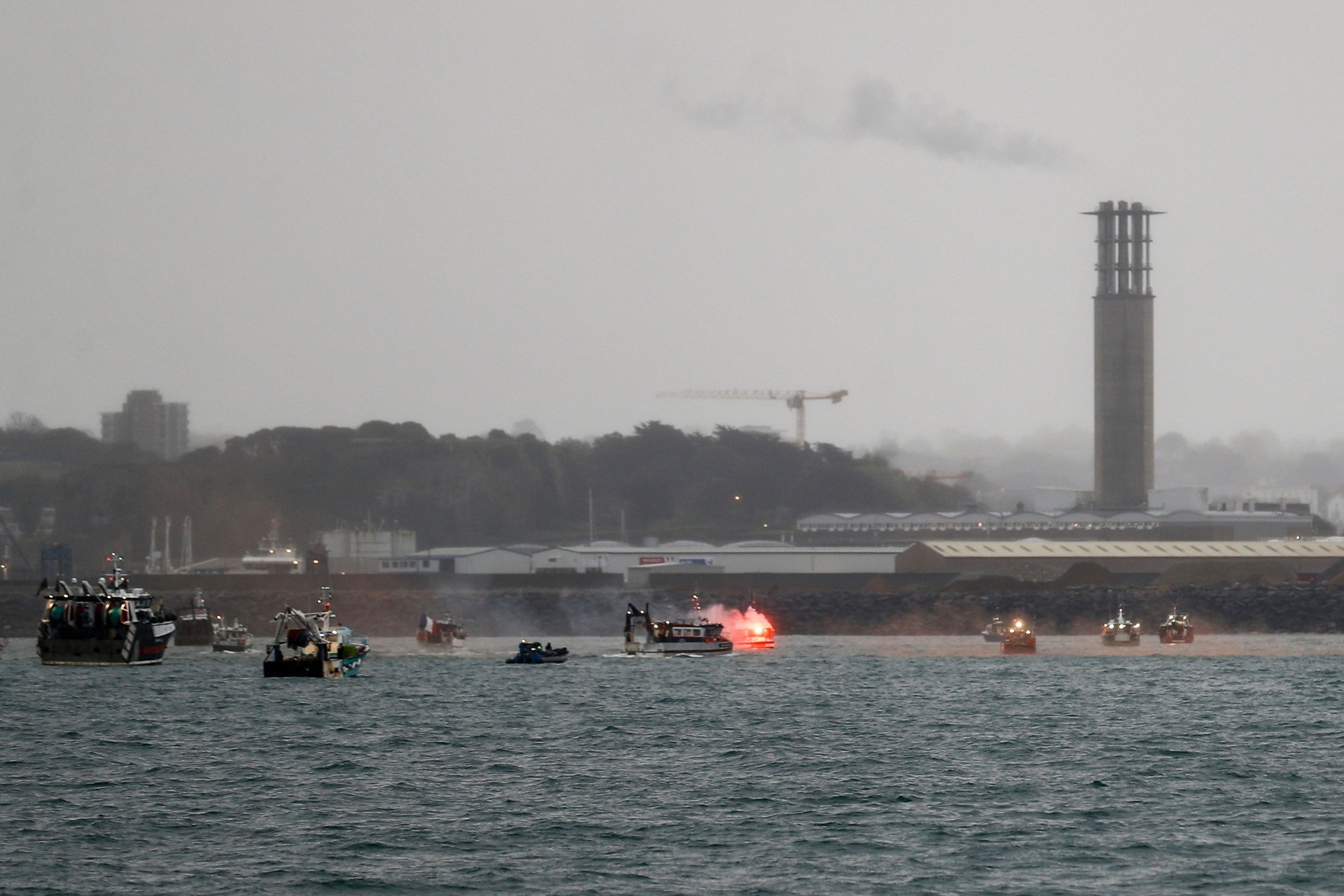 A flare is lit as French fishing boats protest in front of the port of Saint Helier off the British island of Jersey to draw attention to what they see as unfair restrictions on their ability to fish in UK waters after Brexit, on May 6, 2021. (Photo by SAMEER AL-DOUMY/AFP via Getty Images)

The Times reported on Thursday that a flotilla of 60 French vessels, including large trawlers and dredgers, had amassed outside of Jersey’s main port, St Helier, setting off flares, increasing fears that the French will blockade the port.

British fisherman Josh Dearing said, according to the newspaper: “The French being the French, they don’t mess around. They can blockade their own harbours — they wouldn’t think twice about coming and doing it to us.”

French authorities had sent their own vessel, the Athos, to accompany the fishing boats.

Former head of the Royal Navy Lord West said that if the French escalate tensions at sea, Royal Marines could impound the French vessels and arrest its fishermen.

Lord West told Times Radio, according to the Evening Standard: “They no doubt have on board Royal Marine boarding parties and we are used to boarding foreign vessels and indeed UK vessels.”

He added: “…you can’t allow the vessels of another country to blockade one of our ports. In the final analysis, if they actually did block it, then we would have to do something to unblock it.”

“HMS Severn and HMS Tamar are deploying to Jersey to conduct maritime security patrols. This is a strictly precautionary measure and has been agreed with the Jersey government,” a Ministery of Defence spokesman said. 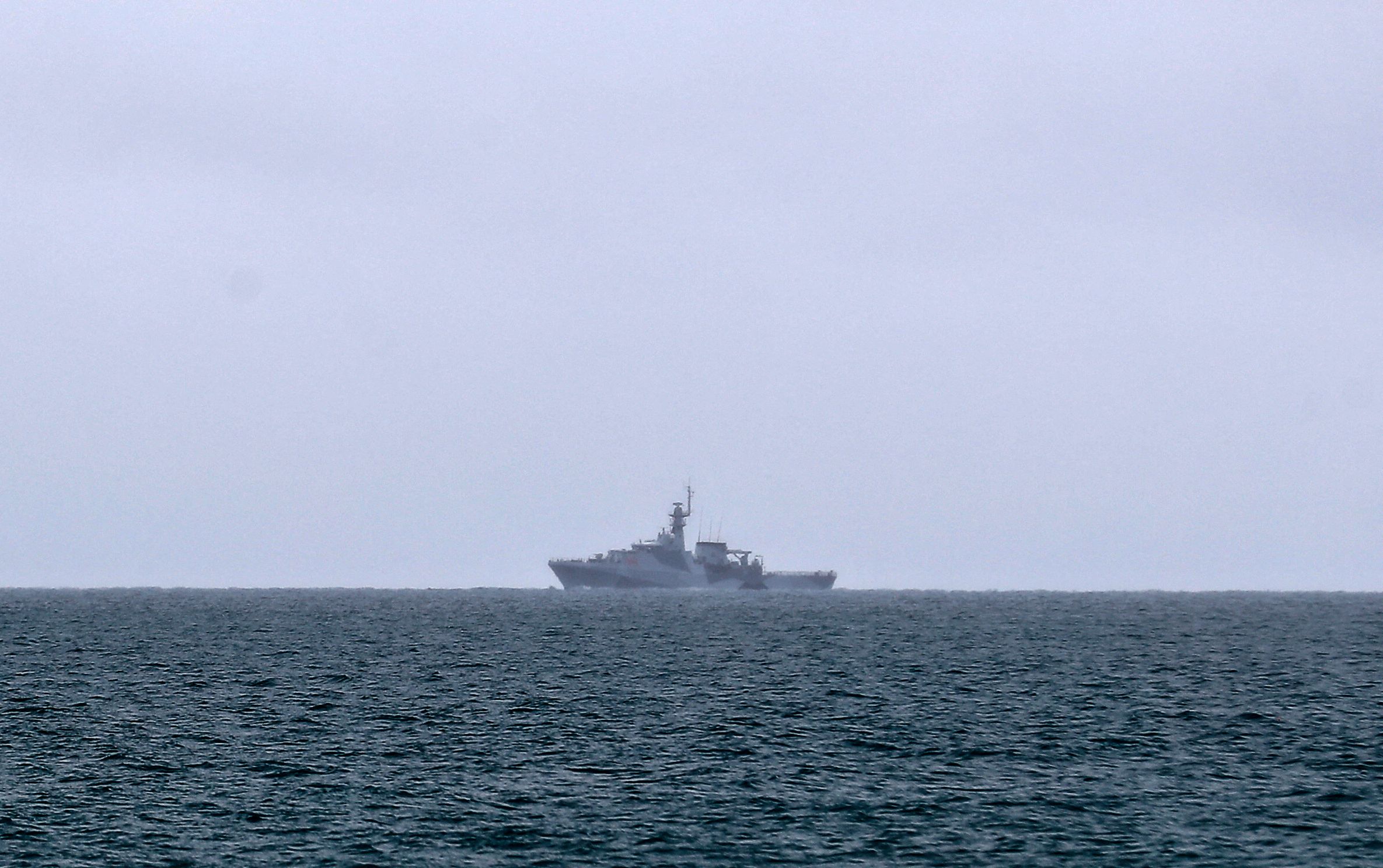 HMS Tamar a Batch 2 river-class offshore patrol vessel of the British Navy, patrols the waters off the British island of Jersey on May 6, 2021. – Around 50 French fishing boats gathered to protest at the main port of the UK island of Jersey on May 6, amid fresh tensions between France and Britain over fishing. The boats massed in front of the port of Saint Helier to draw attention to what they see as unfair restrictions on their ability to fish in UK waters after Brexit, an AFP photographer at the scene said. (Photo by Sameer Al-DOUMY / AFP) (Photo by SAMEER AL-DOUMY/AFP via Getty Images)

The protests come after French Maritime Minister Annick Girardin threatened to cut off the electricity supply to Jersey, the vast majority of which comes from underground cables from France.

Accusing Britain of breaching the UK-EU trade deal, Ms Girardin said on Tuesday: “We will cut the power if necessary! We will not give up, and we will ensure that the agreement and only the agreement of last December are respected.”

French MEP Stéphanie Yon-Courtin repeated the threats later this week, telling BBC Radio 4’s Today programme: “At the last resort, if we don’t have any other means to be understood, then we will have to consider that.”

The Jersey government sought to reassure its population by saying that its power would not be disrupted during the dispute.

The European Commission, the EU’s executive branch, claimed that the Brexit agreement conditions are not being met in the waters off of Jersey’s coast but that negotiations with the UK were ongoing.

Brexit leader Nigel Farage criticised France earlier this week for threatened to cut the electricity to the island, saying: “If the French are prepared to behave like this then thank God we left [the EU].”

Farage Criticises France for Threats to Cut off Electricity to Jersey in Fishing Row https://t.co/EIbCwa7Irj