A stricken cargo ship carrying over 1000 luxury vehicles alongside assorted electric cars bound for America from Germany sank Tuesday in the mid-Atlantic.

The Felicity Ace foundered about 250 miles off of Portugal’s Azores Islands at an expected depth of around 3,500 metres as it was being towed; 13 days after it was disabled by a fire that broke out onboard the vessel, as Breitbart News reported.

Some 1,100 Porsches and 189 Bentleys have been lost in the wreck, with authorities and European carmakers declining to release the exact cargo size, instead insisting those affected will be contacted by dealerships.

Conventional 650-foot-long vessels like the Felicity Ace can carry a potential load of up to 4,000 vehicles, and the ship was said to contain both electric and non-electric vehicles – with the total cost of the lost inventory estimated to be $155 million by insurance experts. 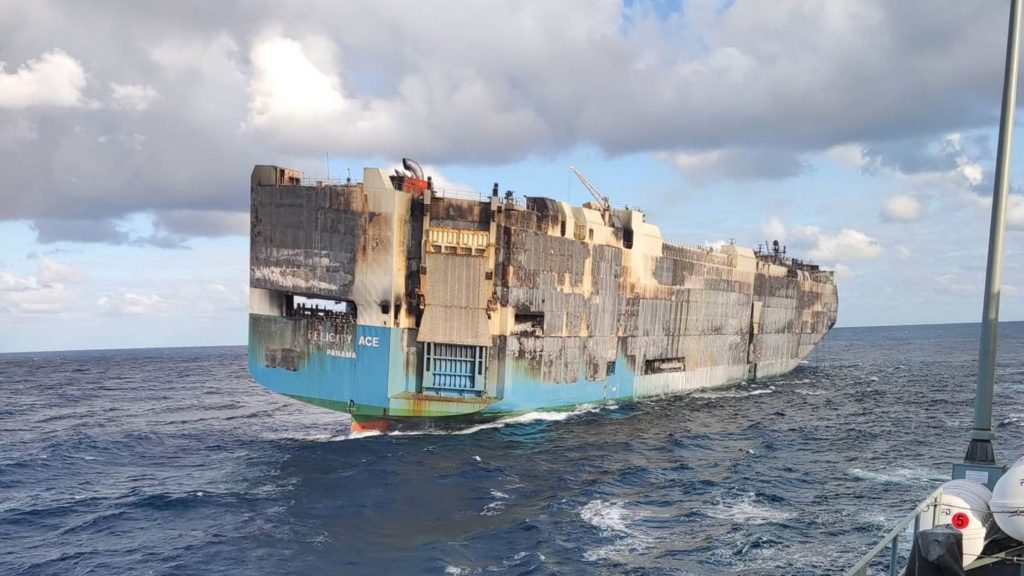 The Felicity Ace cargo ship that famously caught fire off the coast of Portugal on Feb. 16 has sunk. (Portuguese Navy)

Authorities suspect the fire may have broken out due to the lithium batteries used in electric vehicles, but an investigation into the cause of the blaze is still underway, AP reports.

The Portuguese Navy has confirmed all 22 of the crew were safely evacuated from the fire via helicopter with no injuries.

Angus Fitton, vice president of public relations at Porsche Cars North America, has said Porsche is “already working to replace every car affected by this incident and the first new cars will be built soon”.

Volkswagen has also confirmed all its vehicles on the vessel were insured.

Both a Portuguese naval vessel and a Portuguese Air Force plane will remain at the site of the wreck to monitor for signs of pollution but are currently reporting that only a few pieces of wreckage and a small patch of oil are visible from the vessel.

Tugboats have attempted to reduce the impact of the oil leak by attempting to break it up with hoses.