“If they are going to come here, we’ll provide buses … I will send them to Delaware,” he told a press conference November 10, after being asked about Biden’s transfer of economic migrants from Mexico’ border into Floridians’ home state.

I mean if he’s not going to support the border being secured, then he should be able to have everyone there. So we will do whatever we can in that regard and we are absolutely going to do everything we can.

Governor Ron Desantis proposes bussing illegal immigrants, brought to Florida, up to Delaware. "I will send them to Delaware and do that. If he's (President Biden) not going to support the border being secured, then he should be able to have everyone there." pic.twitter.com/V8WuoUTGD4

Many of the migrants get temporary legal status from Biden’s pro-migration deputies as they cross the border. That status would likely deny DeSantis a legal opportunity to detain the migrants for transport to Delaware.

However, migrants who are arrested for the violation of state laws can be detained.

Since January, Biden’s deputies have released roughly 600,000 migrants into the United States, and have allowed at least 400,000 migrants to sneak across the border, often after multiple attempts. 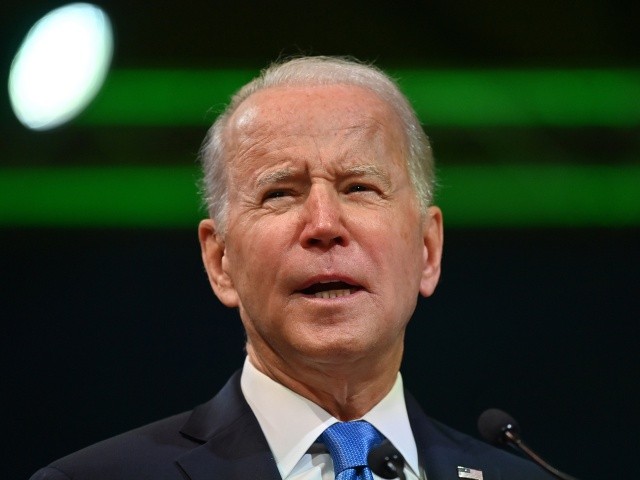 U.S. President Joe Biden speaks during an Action on Forests and Land Use event on day three of COP26 at SECC on November 2, 2021 in Glasgow, United Kingdom. (Photo by Paul Ellis – Pool/Getty Images)

Many of Biden’s migrants join relatives who moved into Florida during the last 10 years.

Many migrants work hard to support their poor families in Central America. Many others are middle-class migrants trying to escape stagnant economies in Brazil, Venezuela, and other developed states.

But their arrival in the United States distorts Americans’ national job market.

Their arrival allows employers to hire cheap foreign workers instead of hiring Americans at good wages, or instead of investing in labor-saving machines to help Americans do more productive work in less time.

The migrants also drive up the cost of housing for Americans, making it hard for young Americans to buy homes and create families.

The migrants also bring children to crowd K-12 schools, making it more difficult for American kids to get a good education.

For many years, a wide variety of pollsters have shown deep and broad opposition to labor migration and the inflow of temporary contract workers into jobs sought by young U.S. graduates. This opposition is multiracial, cross-sex, non-racist, class-based, bipartisan, rational, persistent, attractive to Democratic voters, and recognizes the solidarity Americans owe to each other.