YORBA LINDA, California — Esteemed statesman Dr. Henry Kissinger, 93, was among the guests at the grand-reopening Friday of Richard Nixon Presidential Library and Museum after $15 million in renovations over the past year.

Breitbart News asked Kissinger, “President Nixon displayed a tremendous deal of integrity when he resigned … Do you feel that same leadership and integrity is missing in today’s leadership?”

Kissinger, standing in front of a mural of the Great Wall of China, answered that in choosing to resign rather than face impeachment over his involvement in the Watergate scandal, Nixon “set an example that others can follow.”

Kissinger, who served as Secretary of State for both Presidents Nixon and Gerald Ford, was the architect of Nixon’s China policy and his historic trip to the mainland in 1972.

All diplomatic relations, communications and trade between the United States and “Red” China had been cut off during the Korean War (1950-1953). Kissinger told the press that Nixon had “the vision to open to China and to put before the American people a new vision.” He was accompanied by Chinese diplomat Cui Tiankai, who currently serves as the Chinese Ambassador to the United States.

Asked for his thoughts on the Library’s renovation, Kissinger said: “I think it’s spectacular, educational and honest.” 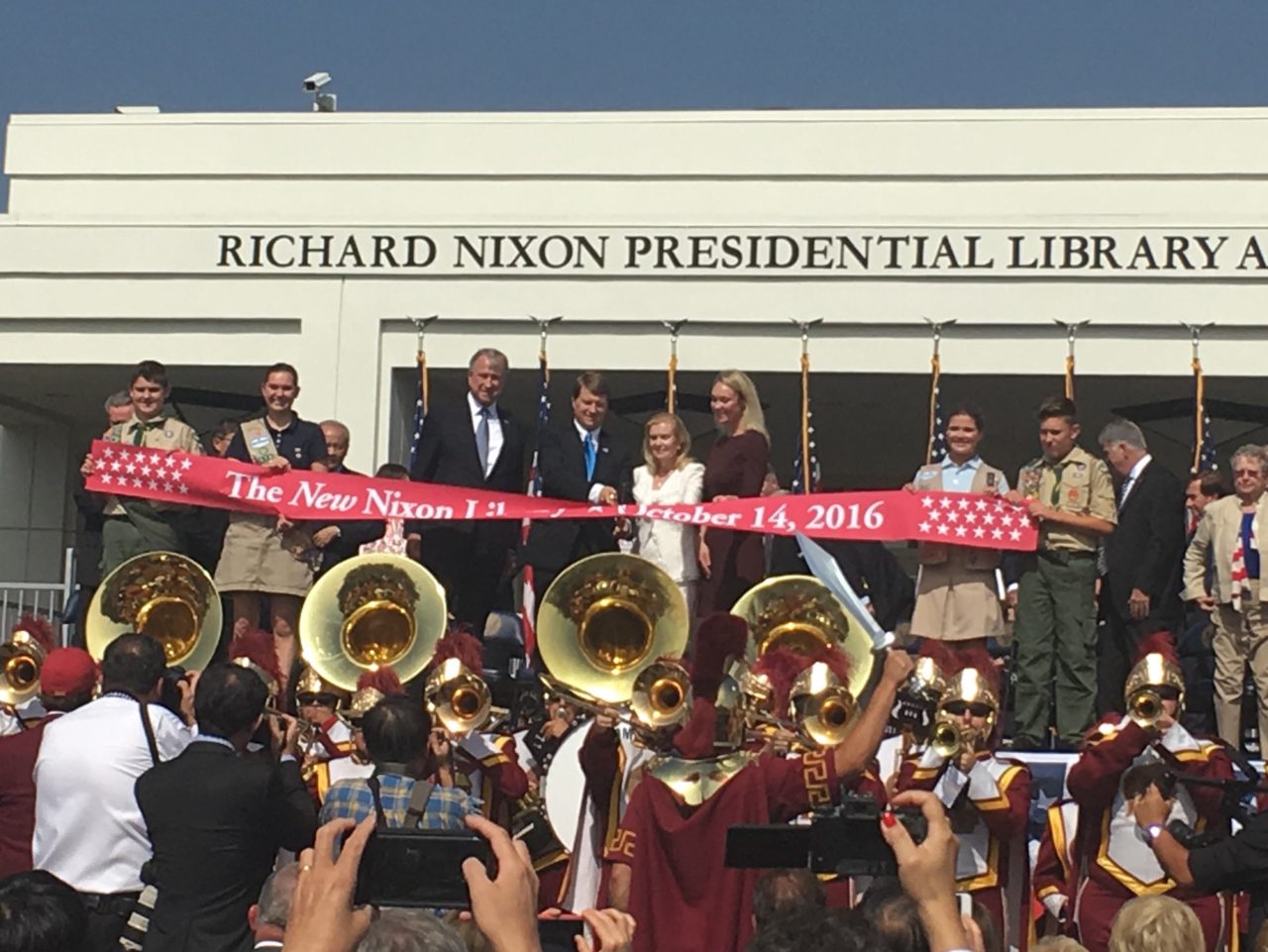 Nixon’s daughter Trisha lauded him for ending the military draft, ending segregation and restoring land to Native Americans, among other monumental achievements. She also reminded those present that it was her father who helped save Israel during the Yom Kippur War.

Rep. Ed Royce (R-CA), the U.S. Archivist David Ferriero, and former California Governor Pete Wilson were among those present. Wilson gave a stirring talk about Nixon, recalling all he had done for America and for the world. He described Nixon as “a conservative reformer” and a man “with incredible energy and an indomitable spirit.”

A few years ago, Wilson recalled, he took his first trip to Israel,  where an Israeli asked him who he thought the most popular American president is in Israel. “Well, I’ll tell you who: Richard Nixon,” the Israeli man told him.

“He believed that All Americans deserved an equal opportunity. He didn’t believe that we should give precedence based on the accident of birth,” Wilson said. He added, Nixon “quietly, without fanfare, went about enforcing the desegregation of schools in this nation, and notably in the South.”

Nixon was a go-getter, Wilson recalled. “You have heard that he has said, ‘I am not a quitter,'” he said. “When under stress, lesser men would have simply capitulated. Not he.” 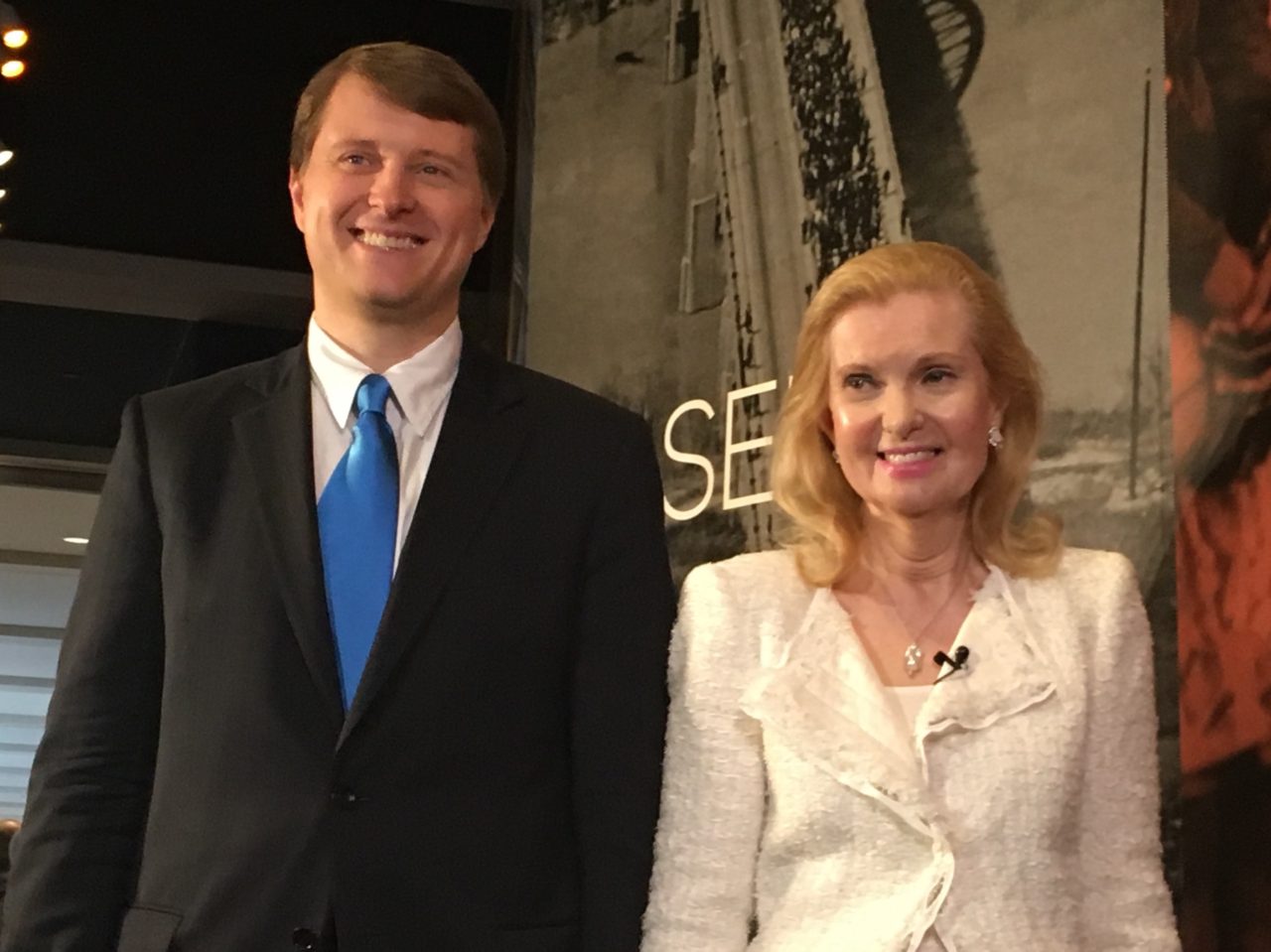 “There was certainly a lot of controversy in Illinois and Texas about the veracity of the vote,” he said. “My grandfather actually decided not to contest the vote because he thought it wasn’t right for the country. He didn’t want to put the country through it.”

Cox continued: “Additionally, you mentioned his decision to resign. Again, he didn’t want to put the country through a process that would rip the country apart [and leave them] with a president who would be a lame duck, especially with all the issues surrounding the Cold War and the Soviet Union in the mid-1970s.”

Fast-forwarding to the current election and today’s leadership, Cox told Breitbart News, “when we look at the rhetoric today, I think that candidates should — when the election is over — take a leaf from his book to always be gracious in defeat. Because, one of the candidates will lose. To be gracious in defeat and accept the will of the people. And I have a lot of confidence that both of the candidates will ultimately come to the conclusion that the people have spoken and our democracy will continue. And that’s more important than any one man, even the president.”

Cox noted that he is supporting Donald Trump for president. Earlier a member of the press corps asked Cox who he thought Nixon would vote for if he were still alive today. Cox said his grandfather voted Republican down the line, suggesting Nixon would also support Trump because he is his party’s nominee.

Ultimately, Cox said that he knows both presidential candidates well and noted that whether Hillary Clinton or Donald Trump wins, “either of them will bring characteristics to the White House that could make them great presidents so long as they don’t give in to the lesser angels of their nature.”