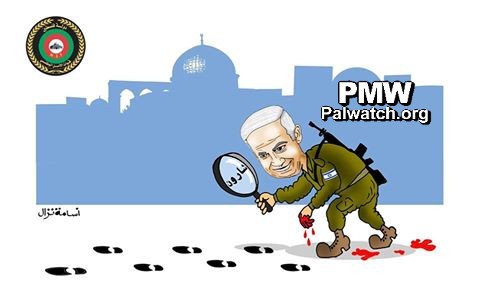 The word “Sharon” is written on the magnifying glass in reference to late prime minister Ariel Sharon, ostensibly demonstrating how Netanyahu is following in Sharon’s footsteps. Sharon is regularly portrayed by the PA as an Israeli leader whose bloodlust for Palestinians knew no bounds.

After the attacks in Paris last year, Fatah posted a cartoon (top of page) depicting Netanyahu helping an Islamic State terrorist position a machine gun on the Eiffel Tower.

In a separate cartoon also posted last week, two Israeli soldiers with exaggerated long noses are shown manning a checkpoint and holding attack dogs. The dogs are shaped like assault rifles and are frothing at the mouth. One of the dogs stands on top of the apparently dead body of a Palestinian woman seeping with blood. Another dead Palestinian lies next to the woman. See below: 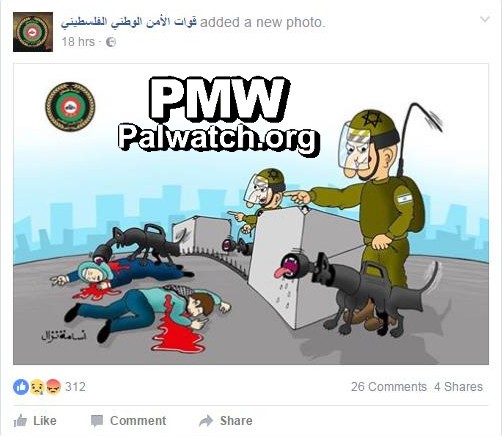 The cartoon reflects the PA’s libel that Israel is guilty of “summary executions” of innocent Palestinians.

The NGO Human Rights Watch (HRW) released a report in August showing that PA security forces have detained activists, including musicians, for condemning PA corruption and lambasting its security cooperation with Israel.