(REUTERS) – The din of bullets, mortars and bombs in the northern Iraqi town of Bartella was replaced momentarily by a sound not heard there for more than two years: the peal of church bells.

A cautious calm returned to this historic Christian area following its recapture from Islamic State a day earlier as Iraqi forces push west towards Mosul, the jihadists’ last major stronghold in the country.

Bartella, once home to thousands of Assyrian Christians, emptied in August 2014 when Islamic State seized control as part of a lightning blitz across large swathes of Iraq and neighboring Syria.

Nearby Qaraqosh, Iraq’s largest Christian town, remains under the control of militants, according to a commander in the peshmerga, which holds nearby ground. Clouds of smoke were seen billowing from that direction this week, though the source was unclear.

Islamic State, which has targeted the adherents and religious sites of minority communities in both countries, issued an ultimatum to Christians: pay a tax, convert to Islam, or die by the sword. Most, including all of Bartella’s residents, fled towards the autonomous Kurdish region.

It will be some time before people can return to the town, which witnessed intense fighting on Thursday between Islamic State and troops from the counter-terrorism service (CTS) which are spearheading the Mosul offensive along with Kurdish peshmerga forces and Iraq’s army and national police.

The road west into Bartella is littered with the remnants of that battle: bullet casings, deactivated improvised explosive devices (IEDs), shrapnel from car bombs and roadside blasts.

The jihadists dispatched more than a dozen vehicle-borne IEDs against government forces in the span of a few hours on Thursday, Iraqi commanders said, but they left many more planted throughout the town’s streets and buildings.

CTS spent Friday shuttering tunnels dug by the militants and removing those mines, though some remain in secondary roads and houses. 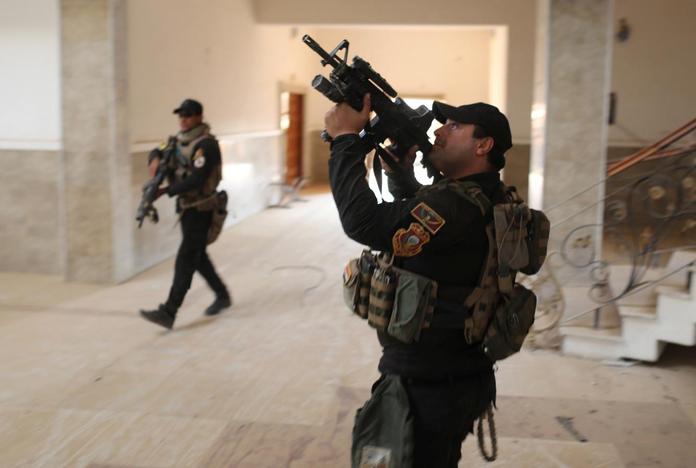 “Bartella is now safe and secured. It is under our complete control,” said the battle’s commander Major General Maan Saadi, an Iraqi tricolor draped around his shoulders.

He told reporters during a brief visit to Saint Matthew’s Syriac Orthodox Church that Islamic State fighters, who pinned down CTS forces earlier in the day with sniper fire, had been completely eliminated.

More than 80 jihadists had been killed in the battle, he added, with a few likely fleeing deeper into IS-held territory.