President Donald Trump announced Wednesday in a televised address from the White House that the United States officially recognizes the city of Jerusalem as the capital of Israel, and will begin moving its embassy there.

“I have determined that it is time to official recognize Jerusalem as the capital of Israel,” President Trump said. “While previous presidents have made this a major campaign promise, they failed to deliver. Today, I am delivering.”

He later added: “Today, we finally acknowledge the obvious: that Jerusalem is Israel’s capital. This is nothing more or less than a recognition of reality. It is also the right thing to do. It’s something that has to be done.”

He also said that the U.S. would finally move the U.S. embassy to Jerusalem in accordance with the Jerusalem Embassy Act of 1995, and would make it a monument to peace.

“I’ve judged this course of action to be in the best interests of the United States of America, and the pursuit of peace between Israel and the Palestinians.”

Speaking in front of several Christmas trees, and a fireplace festooned with holiday bunting, Trump said: “When I came into office, I promise to look at the world’s challenges with open eyes and very fresh thinking. We cannot solve our problems by making the same failed assumptions, and repeating the same failed strategies of the past. Old challenges demand new approaches.” 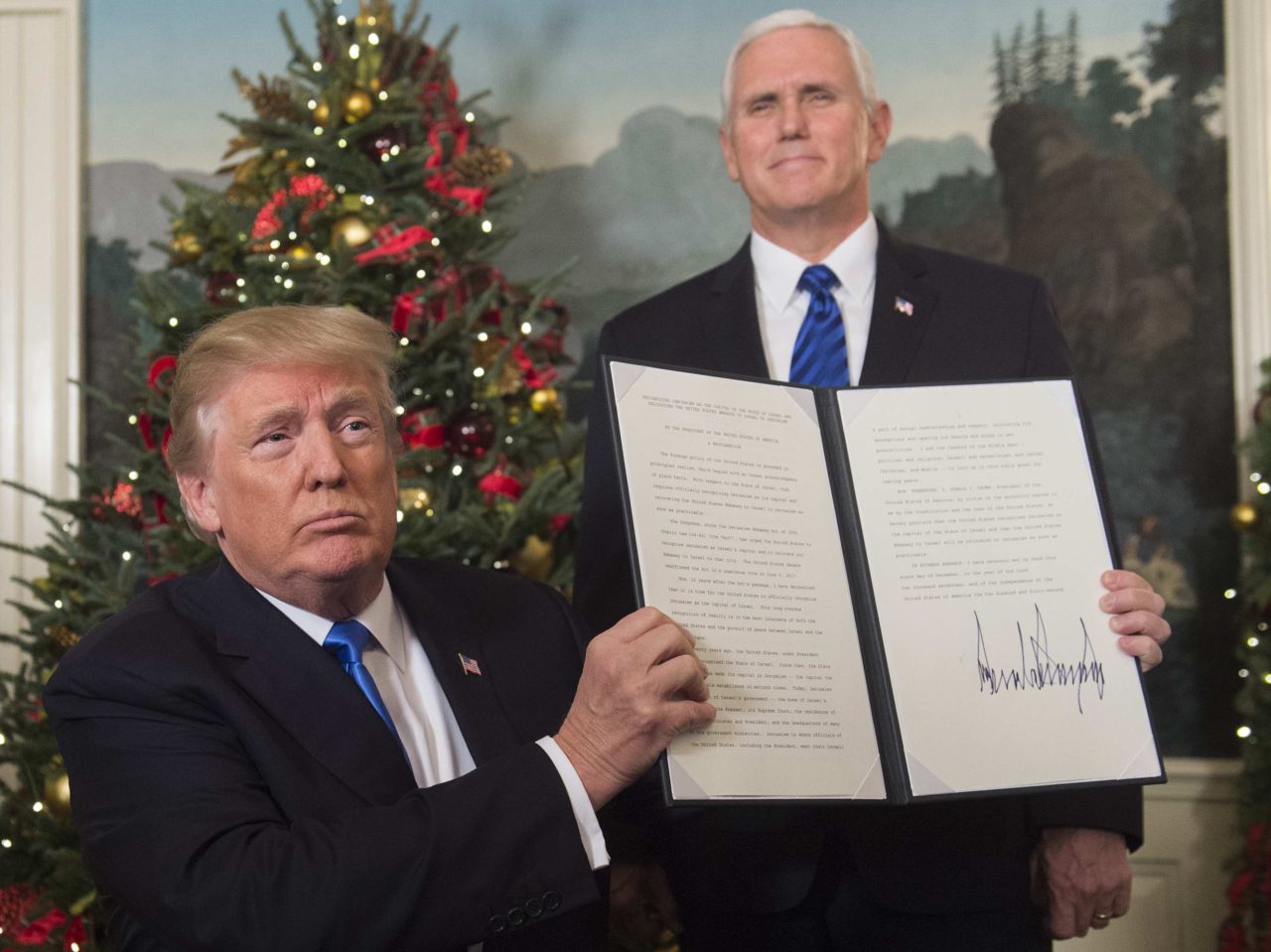 US President Donald Trump holds up a signed memorandum after he delivered a statement on Jerusalem from the Diplomatic Reception Room of the White House in Washington, DC on December 6, 2017 as US Vice President Mike Pence looks on. President Donald Trump on Wednesday recognized the disputed city of Jerusalem as Israel’s capital — a historic decision that overturns decades of US policy and risks triggering a fresh spasm of violence in the Middle East.’I have determined that it is time to officially recognize Jerusalem as the capital of Israel,’ Trump said from the White House.’It’s the right thing to do.’ / AFP PHOTO / SAUL LOEB (Photo credit should read SAUL LOEB/AFP/Getty Images)

While some said they “lacked courage,” he said, they made their decisions based on facts as understood at the time. But after two decades of waivers, it was clear that delaying the recognition of Jerusalem had no benefit for peace, Trump argued.

Instead, Trump said, acknowledging that Israel has the right to determine the location of its own capital was a “necessary condition for achieving peace.”

On a practical level, Trump said, it was apparent to all that every major institution of the Israeli government is located in Jerusalem, and that is where foreign dignitaries met with the Israeli heads of state and government.

He added: “Jerusalem is not just the heart of three great religions, but it is now also the heart of one of the most successful democracies in the world. Over the past seven decades, the Israeli People have built a country where Jews, Muslims, Christians, and people of all faiths are free to live and worship according to their conscience and beliefs.”

Trump said that Jerusalem is today, and must remain, a place “where Jews pray at the Western wall, where Christians walk the Stations of the Cross, and where Muslims worship at Al-Aqsa mosque.”

He was careful to note that the new policy was not intended to prejudice ongoing negotiations between Israelis and the Palestinians. And he argued that his decision on Jerusalem was part of a “new approach” to the Israel-Palestinian conflict, one that would achieve a “great deal” for both sides.

“The United States remains deeply committed to helping facilitate a peace agreement that is acceptable to both sides,” he said. “I intend to do everything in my power to help forge such an agreement.” He added that the U.S. would support a two-state solution if agreed to by both sides.

“Above all, our greatest hope is for peace, the universal yearning in every human soul.”

He also addressed critics of the new policy, calling for calm, moderation, and tolerance.

“There will of course be disagreement and dissent regarding this announcement,” President Trump said. “But we are confident that ultimately, as we work through these disagreements, we will arrive at a peace, and a place, of greater understanding and cooperation,” he said.

“This sacred city should call forth the best in humanity, lifting our sights to what is possible — not pulling us back, and down, to the old fights that have become so totally predictable,” he said. “Peace is never beyond the grasp of those willing to reach it. … Our children should inherit our love, not our conflicts.”

President Trump also placed his announcement in the context of his broader policy in the Middle East, which is focused on working with Arab nations to fight extremism. He reiterated his message from his visit to Saudi Arabia in May: “It is time for the many who desire peace to expel the extremists from their midst. It is time for all civilized nations and people to respond to disagreement with reasoned debate, not violence. And it is time for young and moderate voices all across the Middle East to claim for themselves a bright and beautiful future.”

He added that Vice President Mike Pence would be visiting Israel in the coming days.