TEL AVIV – The Holocaust is the greatest lie in history, invented by the Jews to extort the world, and gas chambers were used to disinfect clothes and nothing more, an Egyptian TV host outlandishly claimed on national television in a program broadcast on International Holocaust Remembrance Day.

“Today is the international day commemorating the greatest lie in history: the Holocaust – that nonsense story invented by Jews, who have been using it for years to extort the world,”Ahmad Suleiman said, according to a translation by the Middle East Media Research Institute (MEMRI).

Suleiman went on to explain that the term Holocaust is Latin and means “murder by burning.”

“The Jews of the world have disseminated this lie, using their influence and their arsenal of media outlets. They label anyone denying that story an antisemite and fight him,” he said.

“Their story is that during World War II, upon a decision by Hitler, over six million East European Jews were burned in ovens, designed especially for that purpose. The Jews use the story about the Holocaust as a means of political and material extortion, and in order to gain the sympathy of the whole world,” the TV host asserted.

“This is, of course, completely groundless. They pretend to be the victims, while they are, in fact, the number one perpetrators of massacres, robbing, and plundering the rights of others,” Suleiman added. 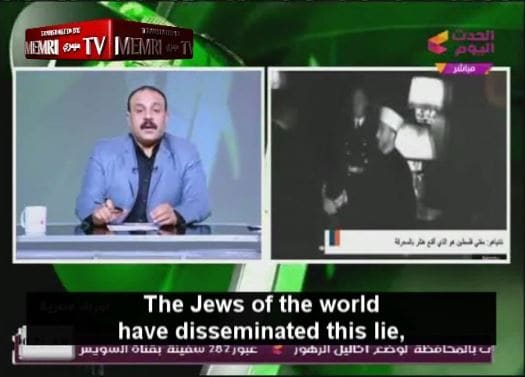 Suleiman cited Paul Rassinier, a political activist generally considered the founding father of Holocaust denial, as saying that the gas chambers were nothing more than a “political game” by the allies in order to justify the establishment of a Jewish homeland in British Mandatory Palestine.

“It was in the interests of colonialist countries, especially Britain and the U.S., to spread rumors about the extent of the Nazi massacres, and about the annihilation of the Jews of East Europe, for the sake of economic and political reasons pertaining to their desire to deport the Jews from that region to Palestine, and to establish an isolated state for them over there,” he said.

The gas chambers, Suleiman continued, were used to disinfect clothes while the crematories incinerated only those who had already died as a result of disease.

Fabricating history, Suleiman stated: “It has been proven historically that the small gas chambers employed by the Nazis were used to disinfect the clothes of the Jewish prisoners and the camp guards, due to the spread of epidemics at the time. As for the crematoria, they were regular ones, which were used to get rid of the corpses of people who died in the epidemics.” 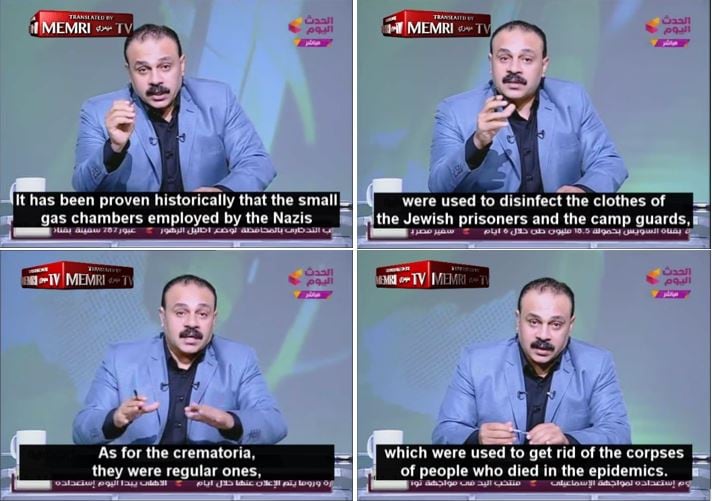 While Suleiman conceded that “obviously, Hitler and the Nazis were extremely harsh on the Jews,” he goes on to say that they “did not kill or annihilate them.”

“The Jews have been shouting that six million East European Jews were killed in the Holocaust, but all the historians say that the number of Jews in Eastern Europe back then did not exceed five million. because many of them had emigrated to America or Palestine, the so-called ‘Promised Land,'” he concluded.