Among the red squares showing the positions of vessels at sea, two Turkish exploration ships stand out, the Oruc Reis and Barbaros.

For three months, the stealth vessel La Fayette has patrolled the strategic area off the Syrian, Greek and Cypriot coasts.

The 170-strong crew are on high alert, with geopolitical tensions at boiling point since the discovery of huge gas deposits and Athens and Greece in dispute over their maritime borders.

France has since August deployed more assets in the eastern Mediterranean, known as “Medor” to the navy, amid a war of words over Turkish incursions into Greek and Cypriot waters.

With President Emmanuel Macron pledging “non-negotiable solidarity” for Greece and Cyprus, Paris needs to follow events in the region closely — as well as communicate clear messages to all involved.

La Fayette took part in August manoeuvres with Greece, Cyprus and Italy to show a united European front against Ankara.

“Our primary mission is to observe everything that happens, to offer our chiefs and the political authorities our own understanding of the situation,” said the ship’s group operations leader, Lieutenant Mathieu.

He oversees central operations, the CO or nerve centre, a dark space to monitor classified information where access is strictly limited.

Data is gathered from surface and aerial radars as well as an infrared camera that follows vessels “of interest” night and day, including submarines that surface.

These instruments of war detect the enemy’s electromagnetic footprints and complement radar to give La Fayette a detailed overview of the eastern Mediterranean basin.

The screens pick up a British warship in Limassol, Cyprus, Russians off the Syrian coast and Turkey’s Oruc Reis on a disputed energy exploration mission between the Greek islands of Kastellorizo and Rhodes, overriding protests from Athens.

“They’ve lightened their presence these last weeks. We are checking that it won’t increase again at one stage or another,” says Captain Sebastien Martinot, the ship’s commander. 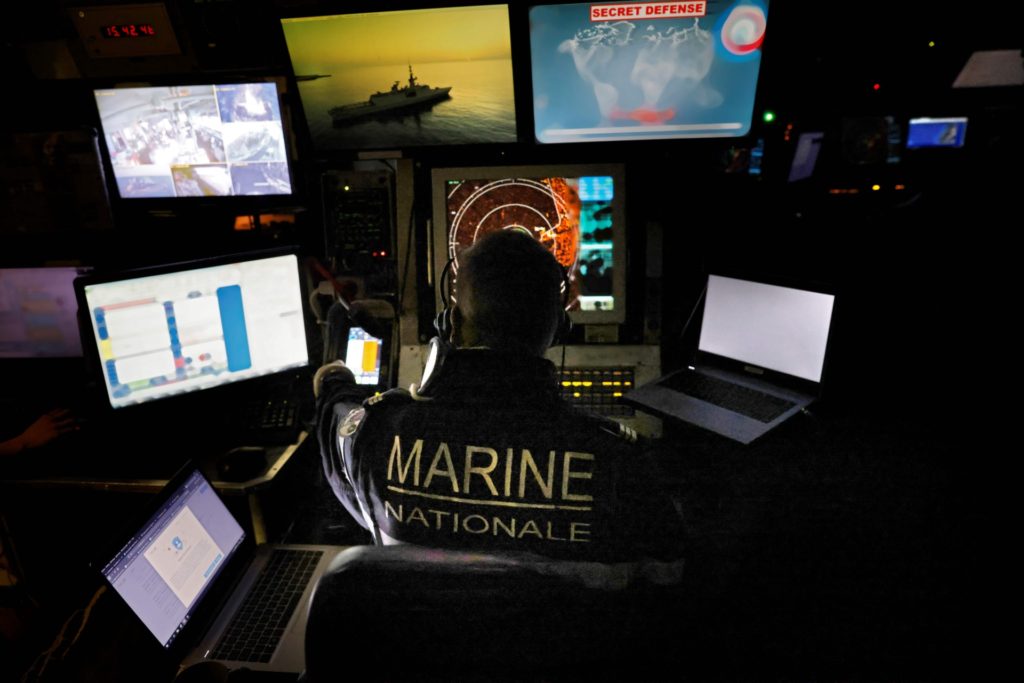 French Navy soldiers work at the tactical operation center on board of the French warship stealth frigate La Fayette as the frigate sails off Syria, Lebanon, Cyprus and Turkey. – The La Fayette and its 170 crew members keep their eyes open and ears strained day and night in this highly strategic maritime space, where the discovery of fabulous gas fields has raised tensions a notch in recent months between Athens and Ankara, at odds over their respective maritime borders. (THOMAS COEX/AFP via Getty Images)

On such a mission, “we shed a light on a zone where more than ever we need clear facts to be able to make judgements, avoid mistakes and not rely on rumour, social networks or even the information from our allies,” he stresses.

During three months at sea, “We have never monitored the Turks as much”, says leading rate Lies, stood on the sun-splashed bridge looking out over the Lebanese coast.

“We have come across them so many times we know which ships are protecting them. But we do not intervene, that’s not our role.”

– “A place of confrontation” –

The order of battle book lies next to him, dozens of pages in a plastic file, including photos and identities of all the vessels of interest La Fayette has come across.

In the stern of the ship, a Panther helicopter is preparing to lift off.

“We are equipped with efficient sensors that can be deployed dozens of nautical miles and transmit data back to the ship,” says Lieutenant Denis, head of the Panther group. “Our photos often end up with the general staff,” he smiles.

All information gathered daily is sent to the French command of the Mediterranean military zone (CECMED) in Toulon. It is also shared with the international anti-jihadist operation Inherent Resolve for Iraq and Syria as well Europe’s Irini set-up to enforce a UN arms embargo on Libya.

However the data is not shared as systematically with NATO, of which Turkey is a member, the captain admits.

In summer, Paris temporarily withdrew from the NATO maritime security operation “Sea Guardian” in the Mediterranean, after condemning “extremely aggressive” behaviour by a Turkish warship against a French vessel during an attempt to check a cargo ship suspected of carrying arms to Libya.

Martinot mused about how things have changed since he joined the navy, saying “today the sea is seen as a place of confrontation”.

“Medor is an exciting theatre, worrying. We need to continue to be present to assert European interests and freedom of navigation.”