General Salami made the remarks while addressing a religious ceremony in Tehran, offering his observation on the back of the scrambled retreat from Afghanistan by the U.S. and its allies back in August.

According to Press TV, Salami said the U.S. is finished as a global power and belittled the Americans who “left Afghanistan in disgrace,” adding:

In the political battle [with the West], Islam and Muslims have emerged victorious and this is a reality… A proof [to this reality] is the humiliating escape of the [American] enemy from Afghanistan.

The [global] arrogance is fleeing the region as it has no more room to operate in the [West Asia] region, and the U.S. has been marginalized more than ever before.

General Salami remains confident Iran and its allies present too big a challenge for the U.S. to surmount in both West Asia and the Middle East, restating his previous claims Iran is too strong for anyone to grapple with.

Pointing to what he called “the formation of resistance movements in all parts of the Muslim world, including Syria, Iraq, Yemen, and Afghanistan,” Salami argued U.S. morale has “plummeted and they have become frustrated.”

The IRGC chief further stated “we are in the final stages of the resistance [to the U.S.] and this juncture has always been difficult, but the Iranian nation is certainly about to score a great triumph.”

Press TV reports similar remarks on American weakness under Joe Biden came a day earlier via a former chief of the IRGC who said Americans “left Afghanistan in disgrace” 20 years after their arrival, expressing “hope” they will be soon expelled from Iraq and Syria as well. 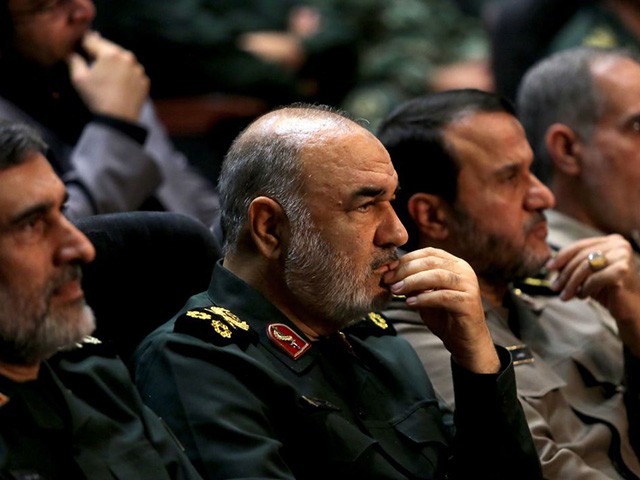 Major General Hossein Salami pictured at Tehran’s Islamic Revolution and Holy Defence museum during the unveiling of an exhibition of what Iran says are U.S. drones captured in its territory, on September 21, 2019. (ATTA KENARE/AFP via Getty Images)

Major General Yahya Rahim Safavi, who served as the IRGC chief commander from 1997 to 2007, lauded Iran’s military power as second to no nation on earth.

He backed the claim made by General Salami in January that Iran is seeking revenge against the U.S. that  “will be hard, firm, regrettable, decisive and complete,” as Breitbart News reported.

Just how Iran would do this was not outlined, however last September an angry Salami declared Iran has special “hidden” military powers it is ready to unleash at any moment on an unsuspecting world.