GOP leaders are trying to get a DACA amnesty through the House, and are trying to negotiate a “third alternative” bill with President Donald Trump, House Whip Steve Scalise told a Fox TV interviewer on Sunday.

“However you feel about the DACA and how to solve that problem, which we want to solve, [Democrats] are standing the way of securing our border which most Americans agree should be a top priority,” he told Maria Bartiromo on Sunday Morning Futures. “We’ll work with President Trump to get that done … We’re working with the Freedom Caucus, and we’re not that far apart.”

Scalise declined to describe the “third alternative” which GOP leaders — led by House Speaker Paul Ryan — are trying to develop with Trump.

Scalise suggested the bill would be somewhere between the no-strings ‘Dream’ amnesty being pushed by 20 business-first GOP representatives and the comprehensive reform package developed by Rep. Bob Goodlatte and Rep. Michael McCaul, the two chairmen of the House Judiciary and House homeland security committees. “We’re … working with the President to see if there is some third alternative,” he said.

Scalise suggested the “third alternative” bill would swap a big amnesty for cash to build a border wall, and did not mention the main immigration-law reforms offered by Trump in his State of the Union Speech.

The problem for Americans is that GOP leaders and many GOP legislators want an amnesty, said Rosemary Jenks, policy director for NumbersUSA. “That’s been clear from the get-go — we have too many GOP legislators who want amnesty just as badly as the Democrats do,” she told Breitbart News. She continued:

The American people are willing to go along with a limited amnesty if they get the end of chain-migration, get mandatory E-Verify, border security, the establishment of American sovereignty  — and yet that is not what Republican leadership wants.

It is not clear if Trump will accept a Ryan plan that junks his popular four-part reform plan just before the November elections — but sources say Ryan’s first proposal was rejected May 15. Ryan is not running for reelection in November and will retire in January.

Trump’s aide, Kellyanne Conway also appeared on the Bartiromo show, where she called for a wall but did not mention the President’s State of the Union plan.

Trump offered to trade amnesty for 1.8 million illegals in exchange for closing the border-law loopholes, ending chain-migration and ending the visa lottery. Instead, Conway just stressed the importance of building a border wall, saying “That border wall needs to be funded … This need to get done … We need to be a sovereign nation that has physical borders.”

Scalise declined several opportunities to say he and Ryan would whip reluctant GOP legislators to vote for the Goodlatte/McCaul bill in any future debate. Despite his pending retirement, Ryan has a lot of power to make wavering GOP legislators support the Goodlatte bill.

We’re going to bring the Goodlatte/McCaul bill to the floor. I think that is the right answer. It deals with wall funding. it secures the border. It solves the DACA problem in a way that we are in sync with the president. Unfortunately, the votes aren’t there yet to pass it and we’re working on some other alternatives with President Trump … the votes aren’t there to pass it. 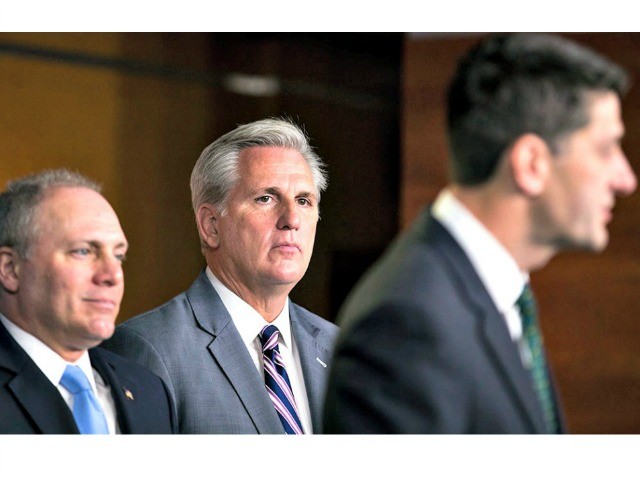 The Goodlatte bill includes a variety of immigration-law reforms that would end chain migration, end the visa lottery, and ensure mandatory use of E-Verify to exclude illegals from jobs. It would also close the many legal loopholes which allow hundreds of thousands of migrants to overwhelm border fences and win “catch and release” so they can get blue-collar jobs serving white-collar Americans in Democratic-run cities, such as Washington D.C.

But the Goodlatte bill also tries to buys support from business groups by offering tens of thousands of extra foreign college-graduates — including 6,000 extra foreign nurses  — each year, plus a huge population of several hundred thousand guest-workers for the food industry, plus work-permits for the 700,000 registered DACA illegals. The bill would not reduce the current population of roughly 1.5 million college-graduate visa-workers.

Investors and business groups want even more foreign workers and have allied with Democrats to oppose any cuts in legal migration. The business/progressive coalition opposes the Goodlatte bill because it would reduce the inflow of new workers, consumers, and voters, and would also constrict progressives’ claimed power to convert poor foreigners into Americans.

Business groups are now providing campaign aid to 11 of the 19 GOP candidates who have signed the pro-amnesty “Discharge Petition,” with the tacit approval of Speaker Ryan. One of the 20 GOP signers of the petition has already resigned from Congress.

Let's follow the money through the discharge-petition, amnesty and cheap-labor maze. Spoiler: Starts with Ryan, goes through a Super PAC, sent to GOP amnesty advocates, then converted into $ for investors. https://t.co/sUXqtaIacy

GOP leaders are not trying to block the discharge petition, said Jenks. “I have watched for far too many years the leaders of both parties shut down discharge petitions in a heartbeat with [the withdrawal of] campaign financing and committee chairmanships. It has happened over and over for decades, yet is not happening here.”

However, “I believe Steve Scalise is the only member of the leadership who is actually trying to get a more conservative solution,” said Jenks. “If [Majority Leader’] Kevin McCarthy want to stop the discharge petition, he could stop it in a heartbeat … Scalise does not have those tools— he does not have the ability to cut off funding, so he is doing what he can.”

If the GOP signature-count gets to 25, then the business-first Republicans will ally with all 193 Democrats to pass their amnesty bill out of the House, likely in June or early July. The complicated vote is expected to allow many GOP legislators to vote for a doomed pro-American bill — giving them a campaign-trailed talking point — before allowing them to vote for and pass a disguised amnesty bill.

Even if the business groups gather more than 25 GOP amnesty supporters, Ryan has the power to block the floor vote. So far, he has not publicly threatened to block the floor, or even to deny campaign aid and committee assignments to the 19 Republicans as they split the party before the November election.

Ryan has long supported the hiring of cheap foreign workers in place of middle-class Americans.

The combination of Trump’s stronger immigration-enforcement push and the growing economy is delivering higher wages and overtime to many employees, including African-American bakers in Chicago, Latino restaurant workers in Monterey, Calif., disabled people in Missouri, high-schoolers, the construction  industry, Superbowl workers, the garment industry, and workers at small businesses, and even Warren Buffett’s railroad workers.

The rising wages in a good economy are a growing concern for Democratic planners, but Ryan offered investors a raise in the supply of workers by forcing passage of farm bill which cuts food stamps. Scalise endorsed the policy of forcing people to work, saying:

If you want to be on welfare, it should be a safety net — if you are able to work, you should not be on welfare.

We need to get work requirements in welfare because now companies are looking to hire people. Why should people that are able-bodied sitting at home getting taxpayer money when they could be out in the workforce and become part of the American dream?

The 2018 tax bill is providing companies with extra funds to invest in new projects. Some that money will go to Americans employees via higher wages in a high-pressure/low-immigration economy — unless Ryan can also supply business with imported workers for the extra jobs created by the tax cuts.

The proposed amnesty bill may fail, along with the many prior amnesty bills pushed by Ryan and others.

The alternative “choice” polls reveal most voters’ often-ignored preference that CEOs should hire Americans at decent wages before hiring migrants. Those Americans include many blue-collar Blacks, Latinos, and people who hide their opinions from pollsters. Similarly, the 2018 polls show that GOP voters are far more concerned about migration — more properly, the economics of migration — than they are concerned about illegal migration and MS-13, taxes, or the return of Rep. Nancy Pelosi.