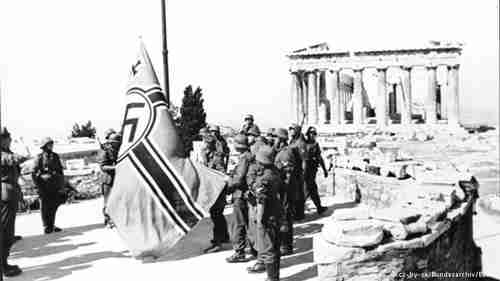 Nazi soldiers raising the swastika flag on the Acropolis

Greece’s government has threatened to seize German property in Greece as compensation for a World War II Nazi atrocity, the massacre of 218 civilians in the central Greek village of Distomo on June 10, 1944. In 2000, Greece’s Supreme Court ruled that Germany owed the relatives of the victims of the Distomo massacre 28 million euros. The decision was not enforced at the time, and the Greek government is attempting to enforce it now.

Among possible assets that could be seized are property belonging to Germany’s archaeological school and the Goethe Institute, a cultural association.

Germany rejects the claims, saying that the 1990 “Two Plus Four Treaty” settled the matter. One German politician threatened reprisals if Greece seized German property: “The subject has been closed since the 1950s. If it came to Greek violations of German property, Germany would know how to defend itself.”

Then there was a new development on Thursday.

Greece has lodged a formal complaint against Germany for an insult by Germany’s Finance Minister Wolfgang Schäuble. According to press reports, Schäuble called Greece’s Yanis Varoufakis “foolishly naïve” in his dealings with the media following EU discussions in Brussels on Wednesday.

According to Greece’s Foreign Ministry, “As a minister of a country that is our friend and our ally, he cannot personally insult a colleague.” Greece is demanding an apology. Guardian (London) and EurActiv and Deutsche Welle (Berlin) and Kathimerini (Athens)

An embarrassment to officials in both occupied South Ossetia and Russia is that many South Ossetians travel to Georgia for medical care.

It’s not an easy trip, either. Russia invaded Georgia in 2008, and occupied and retained control of two of Georgia’s provinces, South Ossetia and Abkhazia. However, Russia has closed the border between South Ossetia and Georgia, and so the only way for a South Ossetian to reach Georgia is to go north into Russia, and then travel back into Georgia. Thus, they have to cross the Main Caucasus Ridge twice, a particularly difficult journey in winter.

Leonid Tibilov, South Ossettia’s Russian-appointed leader, says that “in the overwhelming majority of cases there is no need whatsoever for patients to go to the neighboring country. We have to develop our own medical centers and attract specialists. We are already doing it actively – we are launching construction of a modern medical center with relevant equipment.” However, no modern clinic has appeared in South Ossetia since the 2008 invasion.

According to South Ossetia’s healthcare minister, Grigory Kulidzhanov, most patients “are ignoring” the government decree:

Often people appeal [to the healthcare ministry] insisting on sending them to hospitals in Georgia, ignoring offered alternative to receive medical treatment on the territory of Russia. Of course we can help a person when it is a life-and-death issue and we are doing it, turning a blind eye on political aspects, but in most of the cases requests for sending them to Georgia have no clear justification, meaning that similar treatment can also be provided on the territory of Russia, including in North Ossetia.

Kulidzhanov makes the point that if patients really want to leave South Ossetia for medical care, they could easily go to a hospital in Russia.

However, a Georgian official points out that Georgia has “a high-quality and non-corrupt healthcare system.” Referring to Tskhinvali, capital city of South Ossetia, and to Tbilisi, the capital city of Georgia, he said, “in order to receive the same level of medical assistance, residents of Tskhinvali would have to go to Moscow or St. Petersburg, but that is very far away, while Tbilisi is only a 40-minute drive from Tskhinvali.”

There is late news that Vladimir Putin has on Thursday canceled a long-scheduled ceremony to sign a treaty annexing South Ossetia into Russia. There are rumors that Putin is in ill health, but those rumors are being denied by a Kremlin spokesman. EurasiaNet and Jamestown and Civil (Georgia) and International Business Times

China will be building two of the most technologically advanced nuclear reactors in the world less than 20 miles from downtown Karachi, which has about 20 million residents. The port city of Karachi is considered to be the economic capital of Pakistan. According to one activist trying to get the project halted:

The world has already experienced three major nuclear accidents — at Three Mile Island in the United States in 1979, at Chernobyl in the former Soviet Union in 1986, and the Fukushima disaster in Japan in 2011. A disaster at these new nuclear plants could kill millions of people in Karachi. In addition, Pakistan suffers almost daily acts of terrorism from the Taliban, and so a terrorist attack would be of major concern. Dawn (Pakistan)