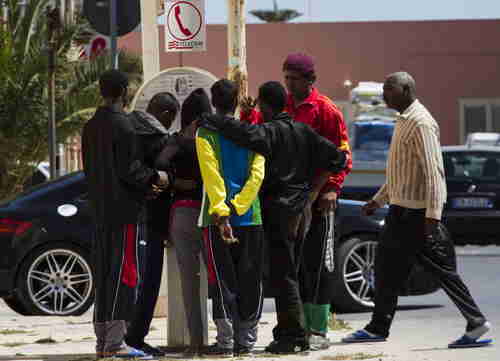 Migrants queue at phone booth on the Island of Lampedusa, Southern Italy, on Thursday (AP)

It seems that every three or four days, there is a new catastrophe in the Mediterranean Sea, involving migrants traveling by boat from Libya to Italy. On Tuesday, 400 migrants drowned when their boat capsized. On Thursday, 41 more drowned after a shipwreck. And late on Saturday, 700 people may have drowned when a small fishing boat capsized 60 miles south of the Italian island of Lampedusa.

The reason that these numbers are known is because in each of the three cases, there were survivors who could describe what happened. It is suspected that there are other shipwrecks where everyone drowns, and so there may be hundreds more unrecorded drownings. There were about 500 drownings in the first three months of the year, and if the above figures are true, then there have been about 1,100 drownings in the month of April alone.

The drowning of 400 migrants created a political crisis that Italy resolved by implementing a very aggressive search-and-rescue program across the Mediterranean that they called “Mare Nostrum” (“Our Sea”). However, Mare Nostrum was extremely expensive, and Italy demanded that other EU countries contribute.

Last November, Mare Nostrum was replaced with and EU program called Triton. However, Triton is not a search-and-rescue program. It is a low-cost border protection program that operates no more than 30 miles off the Italian coast.

The major controversy in Europe is whether the hyperbolic increase in the number of migrants was CAUSED by Mare Nostrum, or whether the increase would have happened anyway. Some people point out that the number of migrants has been increasing since Mare Nostrum was replaced by Triton, but this does not answer the question, because there is a time lag for any action to have an effect, especially since many migrants probably do not know that Triton is different from Mare Nostrum.

According to an official from Médecins Sans Frontières (Doctors without Borders): “A mass grave is being created in the Mediterranean and European policies are responsible.” Independent (London) and AFP and BBC

European nations are being accused of “closing their eyes” to the drownings of thousands of migrants. Pope Francis expressed shock at the new drownings. He has previously said that the Mediterranean Sea should not turn into a vast migrant graveyard, and on Sunday he said, “They are men and women like us – our brothers seeking a better life, starving, persecuted, wounded, exploited, victims of war.” He demanded that Europe “act decisively and quickly to stop these tragedies from recurring,” though the good Pope provided no suggestion on how that might be accomplished.

However, the desire of other countries to help Italy deal with the migrant problem is pretty low. There are several reasons:

With regard to the last point, Victoria Ayling is an MP candidate in the UKIP (United Kingdom Independence Party), which is anti-immigrant and anti-EU. She said that fewer migrants would attempt the dangerous journey if the UK were not part of the European Union:

The simple solution is leave the European Union. The reason they’re coming over in those boats is because the system allows it that should they land in any European country, they’re in the system and they can come over to Britain as if they are EU migrants and have access to everything.

The Schengen Convention, signed between countries who are part of the European Union, allows freedom of movement between participating countries.

It is clearly the system that’s encouraging this to happen, risking their lives, poor things, and I don’t blame them for doing this.

So, with the flood of migrants from Africa increasing, what can the Europeans do to “kick the can down the road,” so they can pretend to be doing something while the problem is getting worse, and the solution being considered is boots on the ground in Libya to target migrant traffickers.

All European police and border authorities must make every possible effort to fight the criminal trafficking gangs who profit from human misery. We need an international operation against people smugglers.

We must no longer accept that Europe on its outer borders too often means death, not humanity.

The British foreign secretary, Philip Hammond added: “We must target the traffickers who are responsible for so many people dying at sea and prevent their innocent victims from being tricked or forced into making these perilous journeys.”

Malta’s foreign minister Dr. George Vella, in a BBC interview (my transcription) says that military action in Libya is required:

This is not the division that exists in Libya. This is purely human trafficking, and if there is some way how to get at these people, whom we will stop from making this massacre of people who are looking for better opportunities.

I’m thinking more in terms of either a force or coalition of the willing, or a decision by the United Nations to have boots on the ground, I would say, specifically to target the human traffickers. We know where they are leaving from. There are two or three places along the coast, quite well known, and if that traffic is stopped, at least we’ll see less and less fatalities in the Mediterranean.

It is hard to see how this proposal will have any effect on the flood of migrants at all. If two or three places on Libya’s coast are blocked, then the traffickers will simply move to a different spot.

And this does nothing to slow the flood of people from Africa and the Mideast who have saved up all their money and are arriving in Libya to purchase a trip to Europe for $1-5,000. The traffickers want that money, and they will use any trafficking route they can find to get it. And the proposal would also do nothing to reduce the number of drownings.

Still, military action would have the appearance that the European countries are doing something, in a way that would not help UKIP and other anti-immigrant political parties. Guardian (London) and AFP and BuzzFeed and AP