An international survey that compares ordinary people’s experience of the rule of law in 102 countries placed Venezuela in last place.

The World Justice Project (WJP) was founded in 2006 as an initiative of the American Bar Association. The group’s goal is to “advance the rule of law around the world.” This week the group released its Rule of Law Index for 2015.

Based on a survey of 100,000 households and 2,400 experts, the survey attempts to “measure how the rule of law is experienced in practical, everyday situations by ordinary people around the world.” The survey compares each country on 44 different indicators grouped into 8 categories such as absence of corruption, open government, fundamental rights, and civil justice.

In 2015, the country which did the very worst overall was Venezuela. Looking at the sub-categories used to generate the overall ranking, Venezuela came in dead last in 3 of the 8 areas, including constraints on government power, regulatory enforcement, and criminal justice. 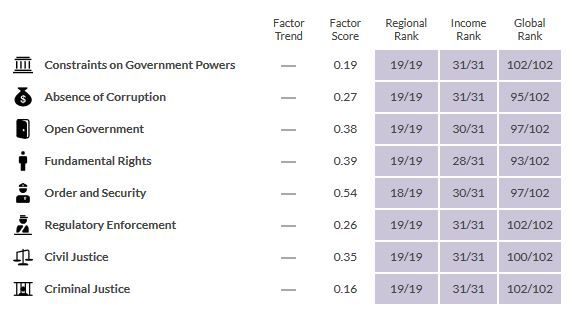 The single lowest score Venezuela received on all of the 44 indicators that make up the survey was a zero. The zero was for improper government influence in the criminal justice system. It’s not hard to see why. Currently, opposition political leaders Leopoldo Lopez and Daniel Ceballos are on a hunger strike to protest being held in a Venezuelan military prison for over a year.

The situation is far worse for student protesters swept up by government police. As Fusion’s Mariana Atencio reported last week, many Venezuelans are afraid to protest for fear of winding up in an underground prison known as The Tomb. In the following clip, the parents of Marco Coello describe the seven months he spent detained. He was beaten and at one point doused in gasoline but was never convicted of any crime.