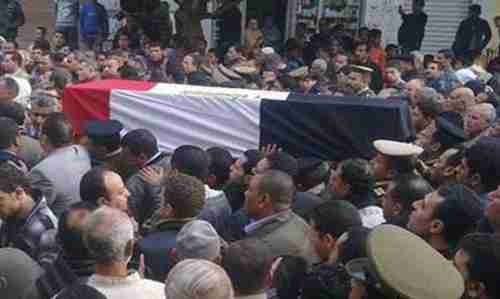 Mourners carry flag-wrapped casket during the funeral of a slain soldier, in Alexandria, Egypt, on Thursday (Al-Ahram)

The fighting in Sinai continued into a second day. Air strikes from Egypt’s warplanes killed 22 militants in dawn raids on Thursday. The situation in Sinai is now “100% under control,” according to Egyptian officials. However, in the town of Sheikh Zuweid, where the militants attacked a string of army checkpoints on Wednesday, the army is still going from house to house, searching for extremists, and removing explosive booby traps and mines.

According to Egyptian officials, at least 300 militants launched the offensive on Wednesday, of whom 100 were killed, while 17 soldiers and security officers were killed.

The militants were from the terror group Ansar Bayt al-Maqdis (ABM – Ansar Jerusalem – Champions of Jerusalem), which has conducted numerous attacks in Egypt’s Sinai, along the border with Israel and Gaza, and last year changed its name to “Walayat Sinai” (Sinai Province), meaning “Sinai Province of Islamic State,” when it repudiated its allegiance to al-Qaeda and declared its allegiance to the Islamic State (IS or ISIS or ISIL or Daesh).

There has been a surge in violence across the Mideast since ISIS called for increased violence during the holy month of Ramadan. Egyptian officials are going beyond blaming ISIS, and placing the blame on the Muslim Brotherhood, which is a banned organization in Egypt. Al Ahram (Cairo) and BBC and AP

We have clear information that Hamas supports the Walayat Sinai organization, which belongs to ISIS.

In the latest attacks, Hamas gave assistance in the form of weapons and organization to the group that supports ISIS. We have examples of commanders in Hamas who took an active part in this aid. Wael Faraj, a battalion commander in Hamas’s armed wing, smuggled wounded casualties from Sinai to Gaza.

However, other reports indicate that Egypt may not agree with this assessment. Jerusalem Post

ISIS attack on Hamas pushes Hamas and Egypt closer together

ISIS has released a video targeting Palestinians that calls Hamas heretical and accuses its officials of apostasy. The main charges appear to be too much interest in democracy, too close relations with the Shia Muslim Hezbollah and Iran, and refusal to govern by Sharia law.

According to the video:

A message to the tyrants of Hamas, you are nothing in our reckoning. You, Fatah and all the secularists, we count you as nothing. God willing, we shall uproot the state of the Jews. You are nothing but froth that will be gone as we move in. God willing, Gaza will be governed by Sharia despite you. …

By Allah, we shall make your young and old weep just as we did very recently to your dogs, the apostates, the hypocrites and the liars, those who grew rotten beards in Yarmouk camp, those who fought against the law of God. By God, we shall do it again and Gaza will see the blood and the dismembered bodies.

Egypt’s policy remains that many of the terrorist cells in Sinai are receiving people and supplies from Gaza, through illegal tunnels dug underneath the wall separating Gaza from Egypt.

However, with Hamas and Egypt having common interests in fighting ISIS, the possibility exists that Hamas can be convinced to support Sinai terrorism less. Egypt’s media have sharply reduced the anti-Hamas rhetoric and incitement, and there have been reports in Arab media outlets of a “honeymoon” in relations between Hamas and Egypt. It’s fair to assume that comes from Egypt’s president Abdel al-Fattah al-Sisi.

Regional politics also play a part. Egypt used to be the main mediator between Israel and Gaza, but since last summer’s Gaza war, when Egypt clearly sided with Israel, Hamas has turned to Qatar as a mediator, with reports of talks about a long-term ceasefire between Israel and Hamas. Egypt would like to return to its former central role as a mediator, and a cooling of hostilities would serve that purpose. Middle East Monitor and YNet (Israel)

As of this writing on Thursday evening ET, Friday morning in China, the Shanghai stock market has fallen over 6%, and it’s only been open for a little over an hour. Whether this is a full-scale panic remains to be seen.

The Shanghai index has fallen 30% since June 12.