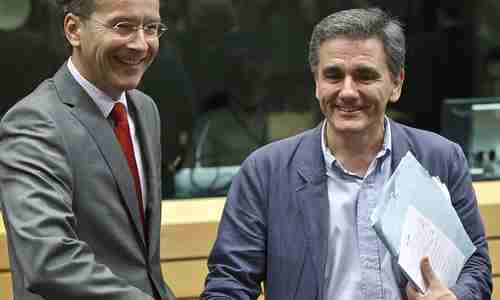 Euclid Tsakalotos (R) exposes his personal notes to cameras, where they can be photographed and examined (AP)

Everyone is getting sick of this story, but it is so awful and so horrible every day that it is impossible to take your eyes off of it.

Tuesday’s news is that Greece’s prime minister Alexis Tsipras was to come to a meeting of eurozone leaders in Brussels with new proposals, but showed up empty-handed. Last week, during his referendum political campaign, he referred to eurozone leaders as “terrorists,” and now he continues to be as offensive and contemptuous as possible to the people that he wants to provide his government with many billions of dollars.

Exasperated eurozone leaders gave Tsipras until Thursday to provide a written plan, and scheduled a full summit of all 28 European Union nations for Sunday.

According to France’s president François Hollande: “It’s not just the problem of Greece – it’s the future of the European Union” that is at stake.

Thursday and Sunday are supposed to be the final, final deadlines, but we’ve heard that before, haven’t we? BBC

Greece’s finance minister tells himself not to gloat

An amusing sideshow to Tuesday’s meeting in Brussels is related to the arrival of Greece’s new finance minister Euclid Tsakalotos at the meeting. He held his papers with his personal notes on top, where they could be photographed and examined.

Tsakalotos is being especially mocked because of the notes reads “No triumphalism.” This is being interpreted to mean that Tsakalotos wants to keep himself from openly gloating over the size of his government’s referendum victory on Sunday. Perhaps he’s unaware that his country staring into the abyss. Guardian (London)

As I have said in the past, I did not care much about President Obama’s ridiculous promises during the 2008 campaign, such as saying that with his election the earth would heal and the tides would recede. I assumed he would become more serious after the election. But then, after the election, I heard him say similar stuff, like his promise that the world would be a different place on January 21, the day after he took office. My reaction was that if Obama believed something so delusional, then we would be in a great deal of trouble. Now, six years later, Obama has had one foreign policy disaster after another, after evidently having no clue what’s going on in the world, and now it’s widely believed that he’s so desperate to have a foreign policy achievement that he’ll concede anything to Iran to get a nuclear agreement.

But now an article in Tuesday’s WSJ describes Obama’s Middle East strategy for the next 18 month, and it is so out of touch with reality that it is clear that he has learned absolutely nothing in six years.

According to the article, he’s seen an Iran deal as a kind of “gateway” to bring about massive changes in the Mideast:

The White House is crafting a Middle East strategy for the remaining 18 months of President Barack Obama’s term that would more forcefully address conflicts in Iraq, Yemen and Syria amid tensions over the conclusion of talks with Iran. […]

[S]enior administration officials said the president is intent on cleaning up leftover messes in the region before leaving office in 2017, including relations with key allies that have been strained by the Iran talks.

How is anyone supposed to react to this? This is completely delusional. As I have been writing since May 2003 in “Mideast Roadmap – Will it bring peace?”, no peace plan can work because Generational Dynamics predicts that Arabs and Jews would be refighting the 1948 war that followed the partitioning of Palestine and the creation of the state of Israel. Since that times there have been four wars among various combinations of Israel, Hezbollah, and the Palestinians. And in recent years, there has been the war in and disintegration of Libya, the war in and disintegration of Yemen, and the rise of the Islamic State (IS or ISIS or ISIL or Daesh) in both Syria and Iraq, threatening neighboring states.

The idea that Obama wants to “[clean] up leftover messes in the region” in the next two years is utter fantasy, but it’s exactly the kind of thing that Obama believes.

According to the article:

White House officials see the conclusion of Iran talks as a gateway for Mr. Obama to press for a political resolution in Syria that would facilitate the exit of President Bashar al-Assad, a close Iranian ally.

“It’s something I’d expect to see more pickup on as the Iran talks conclude,” a senior administration official said. “There’s a growing sense that momentum has turned against Assad and that is feeding a belief that there could be more opening on the political track.”

The conclusion of talks would thrust the U.S. into unfamiliar territory in a volatile region where years of diplomacy with Tehran has left relations with America’s allies, including Israel and Saudi Arabia, deeply strained.

Those alliances could be further frayed if the U.S. takes steps toward a broader rapprochement with Iran, and U.S. officials face a significant task in smoothing regional strains.

Obama is a Generation-Xer who, like many Generation-Xers, believes that he is the smartest person in the room, no matter who else is in the room. He is particularly contemptuous of Boomers and older people in general. This includes the Saudi Arabia’s new King Salman bin Abdulaziz al Saud, who has been so often offended by Obama that he snubbed Obama by not attending a Gulf Cooperation Council (GCC) meeting hosted by Obama. Salman and other Gulf leaders are in their 70s, and consider Obama to be a kid who has no clue what’s going on in the Mideast. ( “15-May-15 World View — Obama repudiates the Carter doctrine at bizarre GCC meeting”)

So as Obama goes about “cleaning up the mess” in the Mideast, you can be certain that he is only going to insult and offend Salman and the others even more.

And the Iran nuclear deal is extremely alarming to the Saudis and other Arabs, because Iran is a mortal enemy. Obama’s oratorical skills will be worthless to change that.

As for convincing Iran to help bring about the exit of Syria’s president Bashar al-Assad, it is far more likely that the opposite will happen. The lifting of sanctions on Iran will increase Iran’s income by tens or even billions of dollars, and much of that money will be redirected to Bashar al-Assad, as well as to the terrorist group Hezbollah.

In Yemen, where Saudi Arabia is fighting Iran-backed Houthi militants, White House officials are also considering ways to work with Tehran toward a diplomatic resolution. Iranian leaders view the conflict in Yemen as a low-cost opportunity to challenge Saudi Arabia, but less critical to Tehran’s future, one senior administration official said.

Once again, this is sheer delusion. Even without support from Iran, the Houthis will continue to fight the pro-Saudi Sunnis in Yemen, as well as the militias that form Al-Qaeda in the Arabian Peninsula (AQAP), which is headquartered in Yemen.

Some people may say that, as the saying goes, it’s better to see the world as it should be, rather than as it is. History provides no support for this view, and Generational Dynamics says that it can only lead to disaster. WSJ and CNN and Politico

As we have been reporting, China appears to be in a state of panic over the 30% loss in stock share value since June 12, and analysts are comparing it to America’s 1929 crash. Last week, China announced a ‘Market Stabilization Fund’ that was similar to an ‘Organized Support’ support fund that America announced just before the 1929 crash.

China’s stock markets fell only slightly on Tuesday, and did not continue the kind of huge plunge that we have seen. However, there is a good reason for that, and it is not because investors are suddenly confident about Chinese stocks.

About 1,000 Chinese mainland-listed companies, or over a third of firms on the Shanghai and Shenzhen stock exchanges, suspended trading on Tuesday precipitated mainly by the continuous drop in share prices. So when the Shanghai Composite Index lost only 1.29% on Tuesday, it was because the prices of stocks for 1,000 companies were frozen, and owners of these shares were stuck with them, unable to sell them.

Many of the remaining companies were those able to benefit from the ‘Market Stabilization Fund’, where fund managers and brokers are investing $19 billion of their own money in stocks, in order to push up prices.

According to analysts, no reason was given for suspending trading on the losing stocks, but analysts say that “they wanted to sit out the market turbulence” that caused the decline. If they believe that, then they’re in for a long wait.

Halting trading on stocks is extremely dangerous because it exacerbates the pressures that caused the losses in the first place, meaning that the fall will be far more precipitous when trading begins again. If trading remains halted for more than a few days, then a secondary market will be created, where investors trade the losing stocks outside the stock market, and that can cause additional harm.

As of this writing on Tuesday evening ET, Wednesday morning in China, the Shanghai Stock Exchange opened 4-7% down. Since trading is still halted on over 1,300 stocks, it appears that the desperate policies to halt the bloodbath have failed. China News Service and Breitbart and USA Today