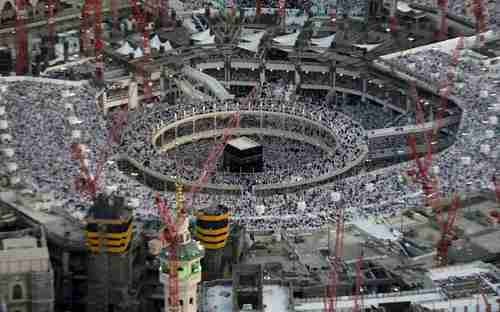 Aerial view of thousands of Muslim worshippers in the Grand Mosque in July, surrounded by construction cranes. The rectangular building at the center is the Kabaa, the holiest shrine in Islam. (Telegraph)

Almost 100 pilgrims were killed on Friday night and 238 injured when a construction crane crashed through the roof of the Grand Mosque in Saudi Arabia’s holy city of Mecca. Terrorism is not suspected. Heavy rains and strong winds, following several days of strong sandstorms, are blamed for the construction accident.

The Grand Mosque was built in the 16th century to enclose the Kabaa, the rectangular building at the center of the mosque, the holiest shrine in all of Islam. The Kabaa itself was pre-Islamic, and was a shrine to Arab polytheists.

When Mohammed returned to Mecca in 630, he ordered the destruction of the idols that were kept in the shrine, cleansing it of polytheistic associations. When Muslims face Mecca to pray, they’re actually facing the Kabaa.

This year, the Grand Mosque was going through the latest of its many enlargements and modifications, to accommodate larger and larger crowds that attend the annual Hajj ceremony. Three million Muslims from around the world are expected for the Hajj, which this year runs between September 21-26. Friday’s construction accident is not expected to affect the Hajj. Arab News and Telegraph (London) and BBC

It’s ironic that Friday’s construction accident took place on 9/11, since a Salafist takeover of Mecca’s Grand Mosque in 1979 was the event that lit the fuse that led to the 9/11 attack.

There were three events in 1979 that shook the Arab / Muslim / Persian world to its core.

One event, which occurred just as the year was ending, was a Salafist takeover of the Masjid al-Haram, or the Grand Mosque, led by terrorist Juhayman al-Oteibi. On November 20, 1979, al-Oteibi led about 500 young jihadists to seize the Grand Mosque. It took two weeks for a massive Saudi army effort to retake the Mosque. By the end, the official death toll was 127 soldiers and 117 militants. Unconfirmed reports indicate that over 1,000 civilians lost their lives.

By 1979, that agreement had broken down, and many of the reforms that were allowed, such as additional freedoms for women, were considered abandonment of “true Islam,” and the al-Oteibis were demonstrating against the al-Saud family. The takeover of the Grand Mosque was the culmination of those protests.

However, the takeover might not have occurred at that time, were it not for two other major events that took place in 1979, inflaming the Oteibis.

One was Iran’s Great Islamic Revolution, which brought a radical theocratic Shia government to Iran, threatening to take over the leadership of the Islamic world from Saudi Arabia.

The other was the Soviet invasion of Afghanistan, which was seen as invasion of a Muslim country by a mostly Christian outside army.

These three events shook the entire Arab – Persian – Muslim world, and were destabilizing to the al-Saud government. The Saudi Arabian government encouraged all Salafists to travel to Afghanistan to fight the infidel invaders. One of those young Salafists was the extremely wealthy Osama bin Laden, who used the support and funding from Saudi Arabia to form al-Qaeda (“the base”), on the border between Pakistan and Afghanistan.

The Afghan war ended in 1989, and bin Laden and the other Salafists returned to Saudi Arabia. However, it was another major event that led the bin Laden and the Salafists to break completely with the Saudi government. In 1990, for the first time in over a century, one Muslim country invaded another Muslim country and completely took it over — that was Iraq’s invasion of Kuwait. The Saudi government then invited America and the West to come use Saudi Arabia as a base with which to launch a military action to free Kuwait from Iraq.

Osama bin Laden was never part of the al-Oteibi revolution that took over the Grand Mosque in 1979, but bin Laden completely adopted al-Oteibi’s repudiations of the al-Saud family, and some of al-Oteibi’s acolytes joined al-Qaeda.

The next event that shook the Muslim world, particularly Saudi Arabia, occurred on September 11, 2001, when plane hijackers destroyed the World Trade Center in New York City, and investigations showed that 15 of the 19 hijackers, including the mastermind Osama bin Laden, were all Saudi Arabian nationals, turning the country Saudi Arabia into an international pariah. Encyclopedia Britannica and Dawn (Pakistan, 19-Nov-2009) and The Saudi-Wahhabi Pact