A gunman ambushed 33-year old Philadelphia police officer Jesse Hartnett on Thursday night. His attacker is in custody and claims it was an attempted “execution” in the name of Islam.

CBS News in Philadelphia reports Hartnett was sitting in his patrol car at around 11:30 PM when the attacker fired 13 shots through the driver’s side window at point-blank range. The CBS report describes the shooter as walking toward the police car while he fired. Three of the shots struck Hartnett’s arm. His injuries do not appear to be life-threatening.

“Shots fired! I’m shot! I’m bleeding heavily!” Hartnett called out on police radio, as can be heard in the CBS report:

Hartnett was able to return fire, and hit the as-yet unnamed suspect three times. Other offices swiftly caught the wounded assailant while attempting to flee the scene, and he has made a full confession, according to CBS. The confession reportedly describes Islam as part of the motive for the attack.

Police also recovered his weapon. The New York Daily News identifies it as a 9mm handgun.

Commissioner Ross said there is video of the entire attack. “This is absolutely one of the scariest things I’ve ever seen,” he declared. “I mean, this guy tried to execute the police officer. The officer had no idea he was coming. It’s amazing he’s alive.”

The shooter is described as a male in his 30s. According to a news description of the surveillance video, he was wearing a “long white frock and black pants” as he approached the police cruiser with his gun drawn. The current condition of the shooter has not been disclosed at the time of this writing.

Ross said Hartnett suffered “significant damage” to his arm, including nerve damage, but is awake and coherent. According to the New York Daily News, he underwent surgery early Friday at Presbyterian Hospital and is expected to make a full recovery.

NJ.com cites Officer Hartnett’s social media profiles to describe him as a native of East Landsdowne, Pennsylvania, who attended Delaware County Community College, served in the U.S. Coast Guard for over a decade, and then became a four-year veteran of the police force.

CBS News reported late Friday morning that the FBI has become involved in the investigation.

Update, 11:05 AM EST: ABC News has published images of the attacker, from the surveillance video: 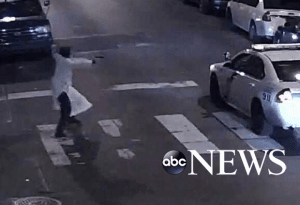 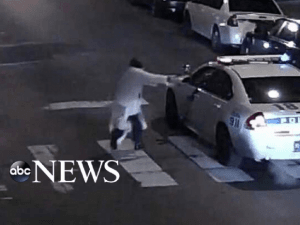 Update, 11:15 AM EST: Philly.com reports the shooter has been identified as Edward Archer, 30, of Yeadon.

Update, 1:15 PM: According to Commissioner Ross, the attacker pledged allegiance to the Islamic State.

Also, the gun used in the attack was reportedly stolen, which will be bad news for those who were frantically looking for a way to fold the incident into their gun-control narratives.

Update, 1:45 PM: Philly.com has some more details about Edward Archer, courtesy of his mother:

Reached at her home in Lansdowne, his mother, Valerie Holliday, said Archer was the eldest of seven children and suffered head injuries from playing football and a moped accident.

“He’s been acting kind of strange lately. He’s been talking to himself . . . laughing and mumbling,” Holliday said. “He’s been hearing voices in his head. We asked him to get medical help.”

She said her son is devout Muslim who has practiced the faith “for a long time.”

“He’s going through a lot lately,” Holliday said, adding Archer believed he was targeted by police.

There are some good reasons the police might have “targeted” Edward:

Archer was scheduled to be sentenced Monday in a Delaware County case, according to court records. He was found guilty in a November nonjury trial of forging documents, careless driving, driving with a suspended or revoked license and other related offenses.

In Philadelphia, he was sentenced in March to nine to 23 months in jail and two years probation in an assault case. He was charged with aggravated assault, conspiracy, firearms offenses and terroristic threats for a January 2012 incident but pleaded guilty to simple assault.

Here’s a thought: maybe we should put more effort into enforcing existing laws, rather than passing a boatload of new ones.  Of course, the existing laws involve difficult duties such as catching and imprisoning violent criminals, and protecting the nation from terrorist threats – both of which are pursuits that often infuriate the cult of political correctness.

It’s much easier to pass new laws that either do nothing of substance, or involve pushing around decent law-abiding taxpayers.  Telling a rape victim she shouldn’t have a gun to defend herself is far easier than keeping someone imprisoned for assault.

Philly.com also tells us a bit more about the wounded Officer Jesse Hartnett, hailed as a “true hero” by fellow officers.  He actually got out of his car and pursued the suspect on foot, after getting sprayed with 13 bullets and taking three hits in the arm.  His father Robert described Hartnett as “a very quality young man.”  On that, I think we can all agree.