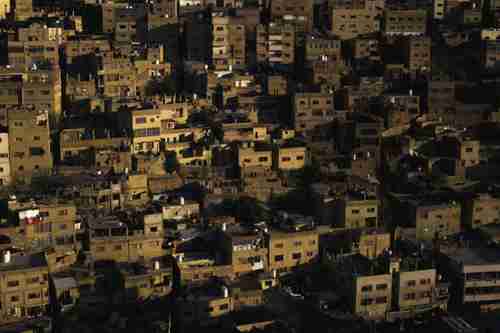 Jabal Al Hussein Refugee Camp in Amman, Jordan. Originally built in 1952 as a refugee camp for Palestinians fleeing conflict from the Arab-Israeli War, it has morphed into a permanent neighborhood in downtown Amman that houses Syrians and Egyptians, along with Palestinians. Many Syrian refugees in Amman live in Jabal Al Hussein Camp because of the affordable rent and to avoid the official refugee camps. (PRI)

There are already about 1.4 million refugees living in Jordan, and more are pouring in every day. According to Jordan’s King Abdullah:

The hospitality of our country has been known for decades. We have looked after waves and waves of refugees. And again what you have to understand, and what is not being spoken about, is not just the 20% of our population, which is Syrian refugees. And, again, reminding everyone in the international community that 90% are outside of the refugee camps. They are in our infrastructure; they are in our schools; they are in our hospitals. Rent in many areas has gone up by 300%. In the northern provinces that you have been, in the northern governorates, in a lot of areas, the Jordanians are in the minority. Rent is up 300%, as I said.

Abdullah says that Jordanian people, especially young people, can no longer find jobs because they are being displaced by refugees. As more and more refugees pour in, the situation “has gotten to a boiling point. Jordanians are suffering from trying to find jobs; the pressure on the infrastructure for the government; it has hurt us when it comes to the educational system, our healthcare; people, just Jordanians trying to get along with their lives. Sooner or later, I think the dam is going to burst.”

Abdullah is traveling to London to attend a donors conference for Syrian refugees. He says that he will be issuing an ultimatum that he needs more international aid, or he is going to refuse to take in any more Syrian refugees beyond “limited numbers.”

Like many Mideast leaders, Abdullah is contemptuous of the whining of European leaders who are complaining about absorbing a couple of million refugees into a population of 500 million, less than half of one percent, as compared to 20% for Jordan. He said that Europeans have been profuse with praise for Jordan. “Those words were all wonderful, but it wasn’t until a trickle hit European shores that then, I think, eyebrows were raised and they began to realise the reality of the challenges that Jordanians have faced.”

My guess is that there isn’t a snowflake’s chance in hell that Abdullah will get the international aid that he wants. The best he can hope for is a few more wonderful words, and promises of aid that will never be fulfilled. Jordan Times and Public Radio International (PRI) and Jordan Times

For the second time, on Sunday the US Navy has sent an American warship on a “Freedom of Navigation op” (FONOP) into the South China Sea near an island claimed by China as sovereign territory. The Navy did something similar last year in October, in both cases to challenge Chinese claims.

Both FONOPs were made in pursuit of stated US policy. Secretary of Defense Ash Carter has repeatedly said that “The United States will fly, sail, and operate wherever international law allows, as we do all around the world.”

However, there were significant differences between the two FONOPs, with two different legal rationales.

In October, the USS Lassen sailed within 12 nautical miles of Subi Reef. Subi Reef has been made into an artificial island by the Chinese, and they are now claiming that the artificial island is their sovereign territory. The purpose of October’s FONOP was to contest China’s claim that it was an “island,” rather than a “low-tide elevation.”

On Sunday, the USS Curtis Wilbur, a guided-missile destroyer, sailed within 12 nautical miles of Triton Island in the Paracels, which is controlled by China but also claimed by Vietnam and Taiwan. In this case, the legal rationale was to assert the right of innocent passage through territorial waters without having to give advance notice, something that both China and Vietnam demand when foreign vessels transit through territorial waters that they claim. According to the Defense Dept:

This operation challenged attempts by the three claimants, China, Taiwan and Vietnam, to restrict navigation rights and freedoms around the features they claim by policies that require prior permission or notification of transit within territorial seas. The excessive claims regarding Triton Island are inconsistent with international law as reflected in the Law of the Sea Convention.

The interesting thing about this statement is that it makes no reference whatsoever to international law, but only to Chinese law. It is as if I declared the street in front of my apartment building to be my sovereign territory, and then threatened anyone who violated “relevant John Xenakis law” by traveling across it. China is claiming the entire South China Sea as its sovereign territory, even though many parts of it are legally in the Exclusive Economic Zone (EEZ) of other countries, and have sovereign territory of those other countries. Like Russia, China today is following the example of Adolf Hitler by annexing regions belonging to other countries, and in the case of Hitler, this led to World War II. China and Russia are both contemptuous of internal law, and only reference it when doing so is to their benefit.

Sunday’s FONOP had the effect of isolating China from the other two countries claiming the island. All three countries have historically demanded “prior permission or notification” before any innocent passage in their territorial waters. But only China has actually protested and condemned the Wilbur passage.

Instead, Taiwan’s Ministry of Foreign Affairs issued a statement stating simply that Taiwan abides by both the U.N. Charter and UNCLOS and will not pose any “obstacle” to resolving disputes in the South China Sea. Vietnam also released a statement reiterating its sovereignty over Triton Island but also saying that “Vietnam respects the right of other countries to innocent passage in its territorial waters as per the regulations promulgated in international law.” Importantly, neither country condemned the U.S. operation for failing to obtain permission before the “innocent passage” even though both countries apparently codify that requirement in their domestic laws.

According to Admiral Harry B Harris Jr., the commander of the U.S. Pacific Command (PACOM):

I think that as we continue down the path of freedom of navigations, you will see more of them, and you will see them increasing in complexity and scope in areas of challenge.

Harris added that as China continues to build artificial islands in the South China Sea, by 2020 China would effectively control the waters – through which 5 trillion dollars of global trade pass – with only Washington being able to challenge it. The Diplomat and China’s Foreign Ministry and Lawfare Blog and The Diplomat