A coalition of socialist groups led by the Homeless Workers’ Movement gathered in front of Temer’s private residence in Sao Paulo, demanding he reverse spending cuts enacted as he assumed the presidency last week. “He’s a president that nobody elected, who wants to put forward an agenda that nobody voted for,” the head of the Homeless Workers’ Movement, Guilherme Boulos, told Reuters. “This agenda of attacking social rights, of cutting social programmes that the Brazilian people have decided, nobody approved of this at the voting booth.” Boulos estimated the number of protesters at 5,000 to the Folha de S. Paulo newspaper, though Reuters puts the estimate closer to 3,000.

The protesters gathered in front of Temer’s house chanting slogans calling for his ouster. Among the most popular was, “Tread lightly; no one can stop an ant when they attack the anthill.” The group blocked traffic for most of Sunday afternoon with large posters, confronting police. 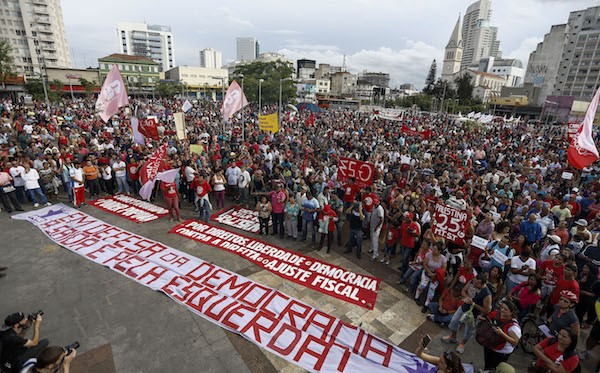 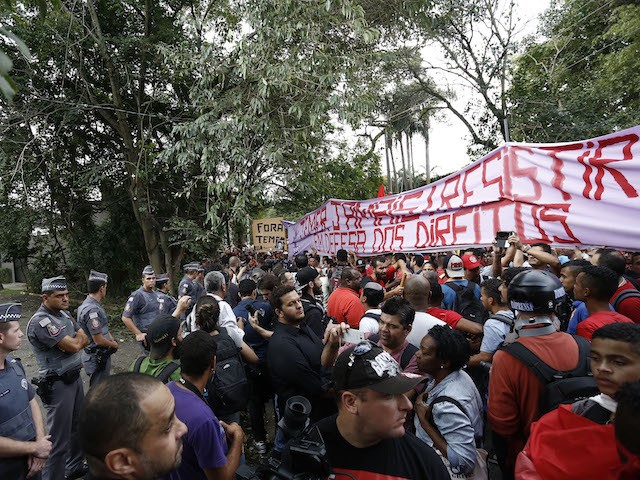 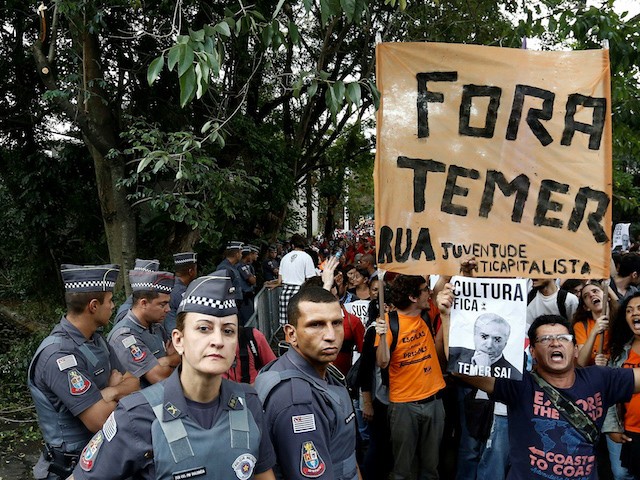 Following the conclusion of the protest in the evening, about 150 protesters remained and attempted to occupy the street in front of Temer’s home, assembling a makeshift settlement on the street. Police responded by removing the protesters using tear gas and water cannons.

“your violence is the fuel of our resistance. Temer out!” clearing of anti-coup camp in Sao Paulo: p/v @j_livres pic.twitter.com/ZJIiaJ8iQU

The protests are a continuation of growing frustrations among Brazilians with the nation’s most powerful, not just the Workers’ Party government under Rousseff. In March, millions of Brazilians took to the streets to support Rousseff’s impeachment, but polls found that, especially in Sao Paulo, Brazilians widely supported the ouster of other high-ranking politicians, as well. An April poll found that 54 percent of respondents in Sao Paulo wanted Temer impeached, and 94 percent wanted House Speaker Eduardo Cunha removed from his position. (He stepped down shortly after approving the House of Representatives impeachment vote over corruption charges.) Eighty-eight percent of respondents in downtown Sao Paulo, the nation’s largest city, described Brazil’s government generally as either “bad” or “terrible.”

Temer became vice president under Rousseff as part of a coalition government, run by both Rousseff’s Workers’ Party and Temer’s (and Cunha’s) Brazilian Democratic Movement Party (PMDB). The Workers’ Party is a leftist socialist party; the PMDB typically identifies as “centrist,” with left-leaning social policies and a more business-friendly economic platform. As the coalition government is widely unpopular, so too are both parties. At their expense, right-wing parties like the Brazilian Social Democrat Party (PSDB) are gaining popularity, enough that Temer was rumored to be considering PSDB members for his cabinet.

In April, during preliminary impeachment proceedings, Rousseff’s supporters began a legal campaign to impeach Temer, as well. Pro-Rousseff attorneys argued that the executive orders Rousseff passed that formed the basis of the impeachment efforts also required Temer’s support, so he is equally guilty of any mismanagement of the economy. The efforts floundered in court, however, with Rousseff’s impeachment passing the House and Senate easily and granting Temer the presidency.

Temer appeared nonetheless focused on the economy during his first speech as president this month, in which he called for a government focused on “national salvation” and the restoration of an economy welcoming to foreign investors. Latin America’s largest economy, Brazil has seen its financial situation descend into crisis as the social programs Rousseff put into effect and the World Cup and Summer Olympics hosting bids have made the nation’s debt skyrocket.

Temer began his tenure attempting to cut unnecessary spending, including reconsidering a number of expansive housing and poverty programs. Temer also attempted to eliminate the Ministry of Culture, turning it from an independent agency into a wing of the Ministry of Education. That effort failed after widespread protests from popular musicians, with his reforms to social programs facing similar criticism.