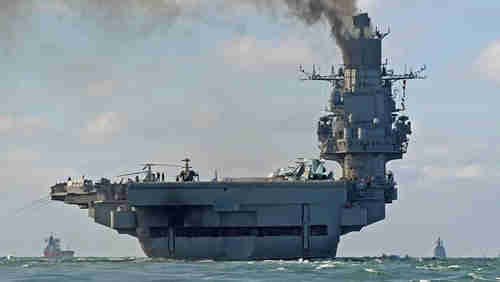 Spain on Wednesday asked for clarification on the intentions of a Russian fleet that was scheduled to dock for refueling in Spain’s port of Ceuta between October 28 and November 2. Spain’s foreign ministry issued this statement:

Given the information which appeared on the possibility that these ships would participate in supporting military action in the Syrian city of Aleppo, the ministry of foreign affairs requested clarification from the embassy of the Russian Federation in Madrid.

Russian fleets had been refueling in Ceuta for years, but hostility is growing in Europe over the genocidal acts of Syria’s president Bashar al-Assad, backed by Russia, and most recently his plans to destroy the city of Aleppo, killing as many civilians as possible, possibly including as many as hundreds of thousands of women and children.

The Russian fleet, which includes an aircraft carrier, had put on a great show last week by traveling through the English Channel, instead of taking the usual route north of Scotland. Its destination is to be a port in Syria, and it is suspected that Russia plans to launch additional bombers from the fleet to take part in the Aleppo slaughter. This prompted Nato to put pressure on Spain to demand a clarification from Russia.

Russia responded to Spain’s request for clarification by withdrawing its request to refuel in Ceuta. Gibraltar Chronicle and BBC

The Gambia follows Burundi and S. Africa in leaving the International Criminal Court

First, two weeks ago, Burundi announced it was withdrawing from the International Criminal Court (ICC) in the Hague. Then, two days ago, South Africa also announced its withdrawal.

On Wednesday, The Gambia became the third African country in quick succession to announce its withdrawal, calling it the “International Caucasian Court” because of its targeting of African countries.

Burundi and The Gambia have many similarities. Both are being led by presidents (Pierre Nkurunziza of Burundi and Yahya Jammeh of The Gambia) who have been in power for years, and who are using violence, torture and mass slaughter of the opposition to stay in power. That’s why both countries are leaving the ICC.

The current ANC leader Jacob Zuma is being widely criticized as corrupt and unaccountable, and is being blamed for ANC’s losses in a recent election. The ANC is badly split, and Jacob Zuma’s unilateral decision to withdraw South Africa from the ICC raises suspicions that he’s about to take some steps similar t those taken by Pierre Nkurunziza of Burundi and Yahya Jammeh of The Gambia to stay in power. Daily Maverick (South Africa) and BBC and Mail and Guardian (South Africa) and Sowetan Live