Border Patrol agents arrested 49 illegal immigrants during three separate cases where human smugglers had stuffed them inside a trailer, in the trunk of a car and in an SUV in an effort to get them across a checkpoint.

The biggest arrest took place when a U.S. citizen driving a tractor trailer pulled up to the inspection area at the Falfurrias checkpoint, information released to Breitbart Texas by U.S. Border Patrol revealed.

At the checkpoint, which is about 80 miles from the border, a police dog tipped agents off to that truck and they sent it to a secondary inspection area. There, the agents found 38 illegal immigrants stuffed inside the trailer.

Just hours before agents had checked an SUV that was being moved on a flatbed trailer. Inside the SUV, agents found 9 illegal immigrants who had been sweating profusely from the lack of ventilation inside the vehicle, the information provided revealed. 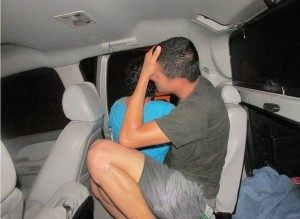 In a similar fashion agents also found two other illegal immigrants stuffed in the trunk of a vehicle. According to U.S. Border Patrol officials all of the immigrants were offered medical attention upon their arrest. 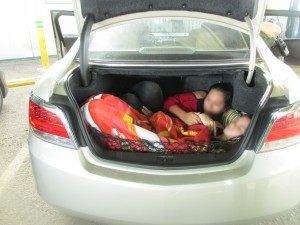 Two illegal immigrants stuffed in the trunk of a car