Rep. Alan Grayson (D-FL) posted a tweet saying he opposes the militarization of police forces. His message contained a profanity. A photo attached to the tweet showed police officers wearing gas masks and holding weapons, standing next to a mailbox with graffiti that said, “F*** The Police.” 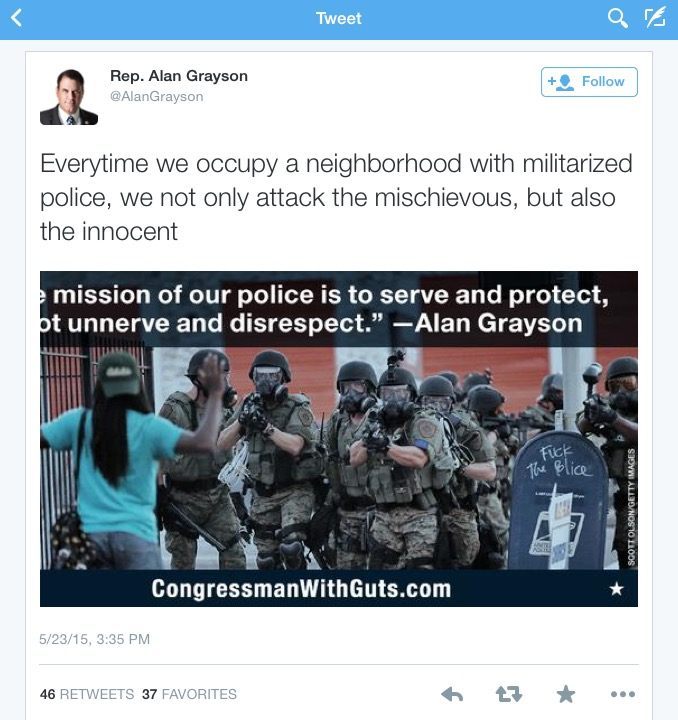 The profanity in the photo was noticed by Palm Beach Post political reporter George Bennett.

Wow. Check out the graffiti on the mailbox in this pic @AlanGrayson tweeted… https://t.co/kvbVktaEVe

As he considers a run for the U.S. Senate in 2016, Grayson is no stranger to controversy. He is currently engaged in battles with both the leadership of his party, who have thrown their support in the Senate race behind Rep. Patrick Murphy (D-FL), and with his estranged wife and mother of his five children, who he is seeking to cut off from his estimated $26 million fortune.

Earlier this month, Grayson launched a profanity-laden tirade at another Florida reporter, saying that his story was s “a whole ‘nother level of bullsh**” and asking him if he was “some kind of sh**ing robot” who went around “sh***ing on people.”