U.S. Education Secretary Arne Duncan asked for advice via his private email account from Jeb Bush about how to respond to concerns about Common Core from current Republican Florida Gov. Rick Scott.

Buzzfeed reports that emails it obtained from September 23, 2013 show Duncan’s request for help from Bush, the former Florida governor, and Bush’s advice that followed which said Scott was “fearful of rebellion.”

The email from Duncan names “Gov Scott” in the Subject field and continues in the Message field with, “Is calling me. Any advice?”

Bush, reports Buzzfeed, replied from a plane an hour later:

He is fearful of the rebellion. Wants to stop using the term common core but keep the standards. Wants to get out of PARCC. I asked him if he had specifics things that the federal government is doing or perceived to be doing. He didn’t have them when I spoke to him last thursday evening.

Duncan’s response was a simple, “Thanks.” 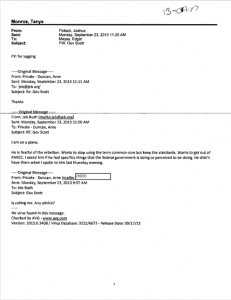 On the very same day of the email exchange between Duncan and Bush, Scott announced a “path forward for high education standards” and a “decision to withdraw from PARCC,” one of the two federally funded interstate test consortia that are creating tests aligned with the Common Core standards.

In his press release, consistent with Bush’s warning to Duncan, Scott said he was outlining steps for the State Board of Education to “maintain high education standards,” and “remove the state from federal intrusion in education policy.”

In early 2014, Florida “rebranded” the Common Core standards with the local flavor title of “Next Generation Sunshine State Standards.”