When Wisconsin Gov. Scott Walker, the 2016 GOP frontrunner who hasn’t declared his candidacy yet, visited New Hampshire this weekend for a fundraising cruise, the Institutional Left embarrassed itself when it tried to protest his opposition to the lefties’ position on global warming.

Before Walker went on a fundraising cruise on Lake Winnipesaukee, Americans United For Change (AUFC)—a liberal organization—announced it would be organizing a counter-protest to Walker’s cruise. A couple things made this different than any normal protest, however. First off, the people “protesting” Walker on global warming—who they called “climate change voters”—would be dressed as moose. Secondly, and perhaps more importantly, they’d be on a “floating iceberg” behind Walker. 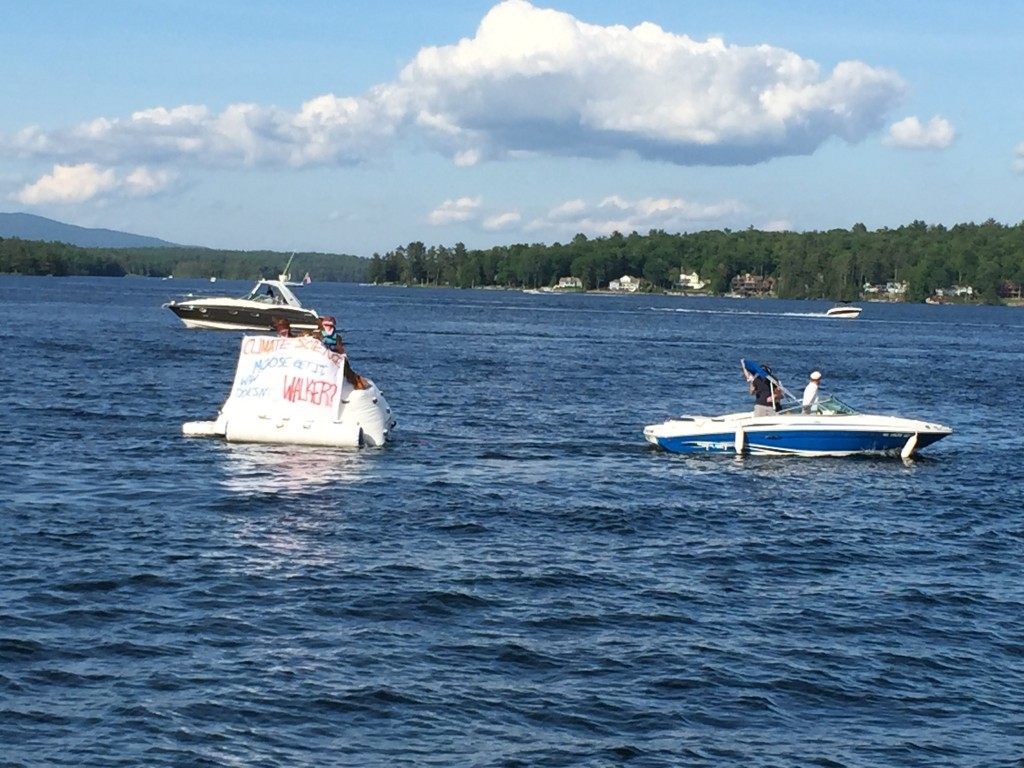 Take it away AUFC announcement:

On Friday, May 29th at 6pm, the Koch brothers’ favored candidate Scott Walker will attend a fundraising cruise around Lake Winnipesaukee and climate voters will be hot on his trail. With a floating iceberg in tow, climate voters will press Walker and his out-of-touch views on climate change. Participants will also be highlighting two University of New Hampshire reports this month showing how climate change will have detrimental impacts on Granite State residents.

The release went on to tout the “great visuals” reporters who dared to risk warm weather on the lake melting the “iceberg” would get if they came along.

So off they went on the floating iceberg tour—with hardly any media taking them seriously—and photos released by the group afterward show just how successful the protest was. Sure enough, two of the five protesters were wearing moose costumes while they floated on the floating iceberg behind the little boat which held all three of the other protesters. Two of those other three in the boat pulling the floating iceberg held up signs warning America: first that “Climate Change Is Real” and second how much of a bogeyman Scott Walker is: “Even Moose Understand Climate Science Better Than Scott Walker.”

Looks as if even though liberal mega-donor and “climate change” theory proponent Tom Steyer may have pulled the plug on the leftwing movement in New Hampshire (he funded all sorts of things last fall including in New Hampshire), the left is carrying on steadfastly.

“The MS Mount Washington left Weirs Beach port with three former governors but had to return to the dock shortly thereafter to pick up Wisconsin Gov. Scott Walker who was late because of an interview with Fox News,” a local reporter for WMUR read over video of Walker boarding the fundraising cruise boat in New Hampshire. “Waiting for him on an inflatable iceberg were people dressed as moose protesting his stance on Climate Change.”

In fact, the protest was so successful that Sirius XM’s The David Webb Show host David Webb—who was on site on the Walker cruise—told Breitbart News the iceberg only tipped over for a little bit.

“Here’s what happened: When they tried to keep up with the M/S Mount Washington as it departed the dock, they flipped the raft over and the Marine Patrol had to go rescue them,” Webb said in an email.

“I’d also say they need to get a job but who would employ them?” Shirley said in an email.

Of course, the unrelenting AUFC released this follow-up statement after Walker’s appearance, filled with the word “Koch Brothers” and clever uses of a dollar sign instead of the letter “s” in many cases.

“You’ve been given millions of rea$on$ by the Koch Brothers to officially refuse to comply with the President’s climate action plan that would reduce carbon pollution by 30 percent by 2030  and create more than a quarter of a million jobs to the U.S. economy by 2040, according to a independent economic analysis.  Do you have any alternative plan – or is it unofficially ‘whatever the Kochs say’?” AUFC said was one of the questions they want a “straight” answer from the governor about.

But it looks like they really got their guy, however, when the press asked Walker about “climate change.” (Unlike the great former Secretary of State Hillary Clinton, who doesn’t need to answer press questions or do interviews or press conferences, Walker does because he needs to be clear with voters about where he stands on things.)

“We need to find a way to continue to do more to protect our natural resources but in a way that is economically as well as environmentally sustainable,” Walker said when asked about the matter.