Social media posts, along with Cruz’s campaign website, reveal that Sen. Ted Cruz supporters in the Colorado Republican Party were responsible for crushing an effort to give Colorado the ability to vote in a state primary.

In May of 2015, four Colorado Senate Republicans killed an initiative “to create a presidential primary in 2016,” reported the Denver Post. “Under the bill, Colorado would have held a presidential primary in March that ran parallel with the state’s complicated caucus system… when it came before the Senate Appropriations Committee, four Republicans voted to kill the bill with three Democrats supporting it.”

On Cruz’s campaign website, Sens. Woods, Grantham, and Lambert are all listed as Cruz supporters and as declared members of Cruz’s “Colorado Leadership team.” 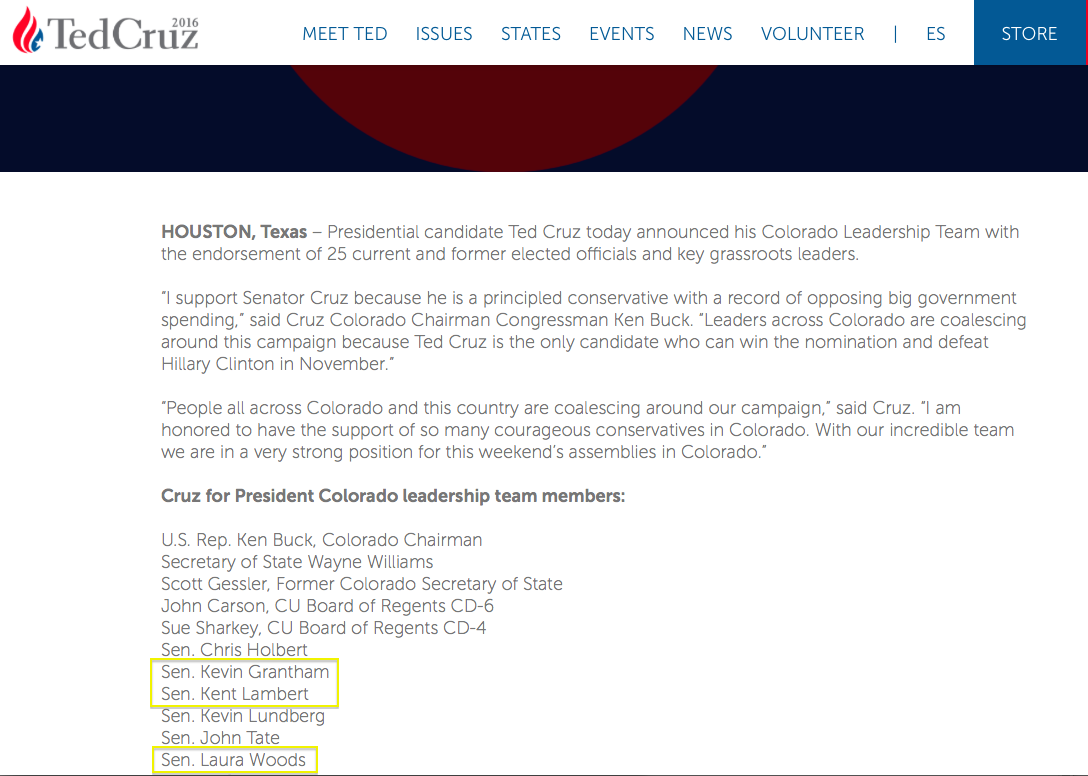 “I am honored to have the support of so many courageous conservatives in Colorado,” Cruz said about his so-called leadership team in early April. “With our incredible team we are in a very strong position for this weekend’s assemblies in Colorado.”

At the time, the editors of the Denver Post seemed perplexed by Grantham’s decision not to support the primary election initiative. In a May 2015 editorial titled, “Colorado GOP flubs chance for 2016 presidential primary,” the editors write: “What? Grantham was a sponsor of the bill. If he thought the bill made enough sense to put his name on it, why wouldn’t he think it should be passed out of committee?”

The editors go on to suggest that Party leaders may have had “other agendas that remain undisclosed” for rejecting a primary election of the people. The editors write: an “opportunity to move Colorado out of its antiquated presidential caucuses has been lost through miscommunication, timidity or, perhaps, because of other agendas that remain undisclosed.” They continue, “The caucuses guarantee lackluster voter participation and the disproportionate influence of activists on both ends of the political spectrum who are not representative of the parties’ mainstream. Some romanticize the caucus system as the purest form of grass-roots democracy, but that’s only accurate if your idea of democracy involves excruciatingly low turnout — by design.”

I am officially a delegate to the #RNC2016 in Cleveland!

Vote for the official Cruz slate at your CD and Statehttps://t.co/haZ2Py6ooh #Cruz2016

At CO GOP Assembly @tedcruz is in the House!! #copolitics pic.twitter.com/rfOqyFyZOM

Sen. Jerry Sonnenberg, who — unlike the others — is not listed as a member of the Cruz’s “Leadership team” tweeted:

Ladies and gentlemen, let me introduce you to the guy who cleaned up on GOP delegates @tedcruz #copolitics pic.twitter.com/jm8lBInPm8

In a Wall Street Journal op-ed last week, Trump addressed the Colorado controversy. Trump said that delegates are “supposed to reflect the decisions of voters.” Indeed, for many years now, delegates have largely been seen as an honorary position for Party loyalists and household names in local districts. Yet in recent months, there has been increasing discussion about serious efforts to recruit “Trojan horse delegates,” who would cast off their honorary titles and actually choose a nominee based on their own personal whims.

In his column, Donald Trump addressed these “double-agent delegates who reject the decision of voters” and tied Cruz to the growing controversy over a delegate selection and convention procedure that operates completely independent from the actual Republican electorate:

No one forced anyone to cancel the vote in Colorado. Political insiders made a choice to cancel it. And it was the wrong choice. Responsible leaders should be shocked by the idea that party officials can simply cancel elections in America if they don’t like what the voters may decide… Mr. Cruz has toured the country bragging about his voterless victory in Colorado. For a man who styles himself as a warrior against the establishment (you wouldn’t know it from his list of donors and endorsers), you’d think he would be demanding a vote for Coloradans. Instead, Mr. Cruz is celebrating their disenfranchisement… Mr. Cruz has no democratic path to the nomination. He has been mathematically eliminated by the voters… Voter disenfranchisement is not merely part of the Cruz strategy—it is the Cruz strategy… My campaign strategy is to win with the voters. Ted Cruz’s campaign strategy is to win despite them.