Target’s Twitter account hasn’t emitted even one tiny Tweet since April 19, when the company triggered a nationwide boycott against itself by demanding that all of its customers use mixed-sex bathrooms and changing rooms to ensure respect for a few transgender customers.

The two-week silence from the Twitter account is evidence that the company didn’t realize the risks of changing their bathroom policies, said Jim Hughes, a veteran branding expert based in San Diego, California. If the pro-transgender plan has been carefully planned, and if it was expected to bolster the company’s support among millennials, then the company’s P.R. team would be trumpeting the good news via numerous channels, including Twitter, he said.

The CEO “would be out talking it up if it were a strategic move,” he said.

But the company’s public affairs page is silent about the issue. Its most recent news release is dated mid-month, just before the April 19 crash. Ironically, the release is about the chairman of Starbucks, who was forced in March 2015 to end a disastrous plan to have baristas push race-related political issues at company customers.

The company’s chief spokesman, Dustee Jenkins, has also ignored the controversy on her Twitter account since the company issued its short, low-drama statement on April 19. “We welcome transgender team members and guests to use the restroom or fitting room facility that corresponds with their gender identity … Everyone deserves to feel like they belong. And you’ll always be accepted, respected and welcomed at Target,” said the statement.

Target’s media staff declined to answer questions from Breitbart for this article.

Since Target announced the mandatory policy of mixed-sex bathrooms and changing rooms, the company’s stock has dipped by more than five percent. It now stands at $80, down five percent or $4 per share from the April level of $83.98. That’s a $2 billion loss.

The company’s reputation has been heavily damaged, and the percentage of people ready to buy at Target dropped by 10 percent, according to data released by YouGov.

More than one million Americans have signed a boycott pledge with the American Family Association. On May 3, the association’s website showed 1,163,576 signers.

Most Americans would rather continue their compromise policy of politely ignoring cross-dressing people in bathrooms, but progressives are demanding that Americans agree to share their bathrooms with people of the other sex, said Glenn Stanton, the director at the conservative group, Focus on the Family. This dispute about bathrooms is really “about the politics of [transgender] acceptance,” he said.

Since Target’s decision amped up the dispute, a national poll showed a sharp rise in public support for single-sex bathrooms.

Target’s last Tweet was sent April 19 to tout the new Marimekko collection of housewares. The collection placed in stores on April 17, just two days before the company ignited the boycott.

The company sent out six Tweets in April, ending April 19. That’s one Tweet every three days.

It sent out 19 Tweets in March, and 81 Tweets in February — many of which were tied to a new marketing campaign with pop-star Gwen Stefani. It produced 19 Tweets in January and 31 in December, 2015.

The company’s weak defense of its open door policy contradicts initial claims and evidence that the company announced the pro-transgender policy as part of a strategy to boost sales to young, multicultural millennials, said Hughes. “I don’t think you would purposely alienate a major audience without a [media] plan in place,” he said.

Only a Target insider can reveal if the controversy was planned or accidental, he said. “It will take someone from Target to stand up.”

I wasn't kidding about returning my orders to @target Back it goes. Conserv principles at work pic.twitter.com/e1v78STHSN

The folly of ‘inclusive’ restrooms: Target is just the latest business to yield to political correctness https://t.co/8Z5EcuYVAd

The issue is also ensuring that ordinary TV stations are also damaging the company’s effort to portray itself as “cheap chic.”

WATCH: Woman in Target confronts man who is known for preying on women in public places; man later arrested https://t.co/u4SoIwYqeF

Just as problematic for the company, progressives and people who want to live like the other sex are rushing to defend Target — and so are keeping the damaging controversy boiling. Worse, supporters are blending Target’s iconic brand into their own political campaigns.

But Target’s managers have already published their own mashup of the Target’s vital trademark with gay rights imagery. 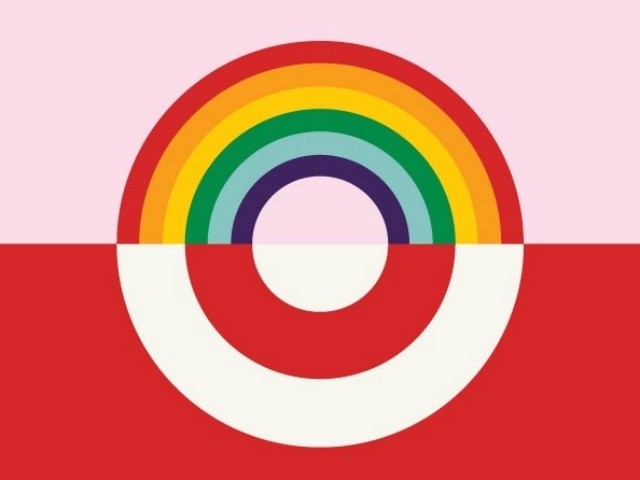