Only pro-abortion women were allowed to partner with the so-called “Women’s March” in Washington, but the president of America’s largest organization of pro-life youth decided to crash the march anyway with her group’s own message about abortion and women.

On her Facebook page, Kristan Hawkins, president of Students for Life of America, wrote, “Yeah so they wouldn’t let us in their march so we just ran ahead and got in the front.” 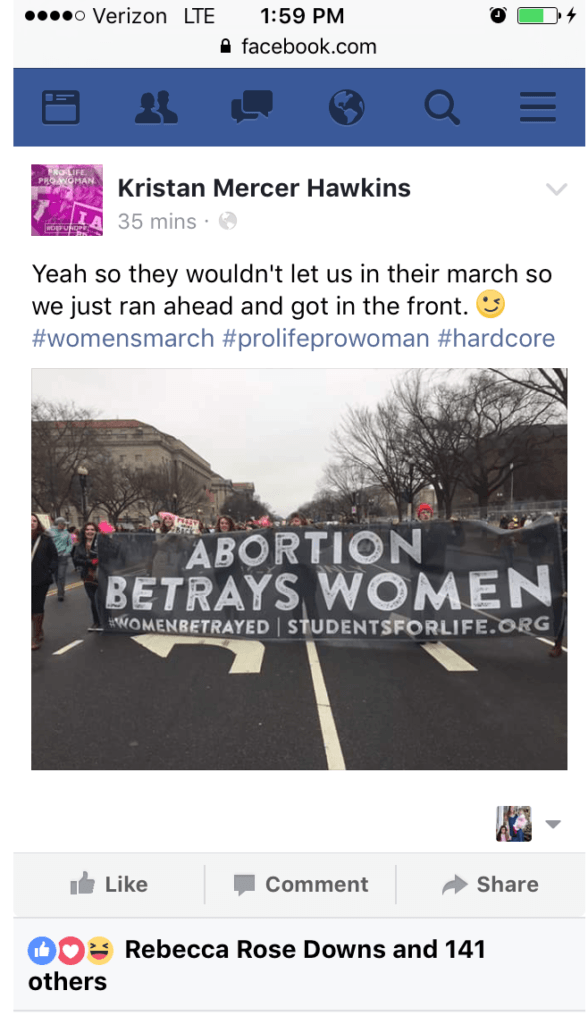 Carrying a banner that states “Abortion Betrays Women,” Hawkins and her group posted on Facebook, “We will not sit by as Planned Parenthood, our nation’s abortion Goliath and a sponsor of this March, betrays women into thinking abortion is their only choice.”

Hawkins said in a statement that the Women’s March is “excluding the majority of American women who find abortion to be morally wrong and believe in protecting families, defending the marginalized, and achieving social justice.”

“Instead of a march to promote those worthy values and truly be inclusive, the event has turned into a rallying cry for the radical abortion industry to save their own baby: taxpayer funding of Planned Parenthood,” she added.

We are for ALL human rights – born and preborn! #WomensMarch #prolifeprowoman pic.twitter.com/kcMYlwUAXU