Here’s more evidence that Trump did the right thing by pulling out of the UN’s Paris climate agreement.

Had the U.S. stayed in it would have been on the hook for a fair chunk of this eye-watering pay demand from India.

Yes, you read that right. Not billion but trillion. That’s $2,500,000,000,000 which India was expecting to be paid over the next 15 years by the Western nations – ie mainly the U.S. – as a bribe for pretending to decarbonize its economy in line with the U.N. Paris agreement.

And, inevitably, it wasn’t just India that wanted its climate Danegeld. So did every other country which could qualify for developing world status. Here, courtesy of Chris Horner, is a document from U.S. climate negotiator Todd Stern. He clearly thinks it’s funny, though I’m not sure I would if I were a taxpayer having to fund it… 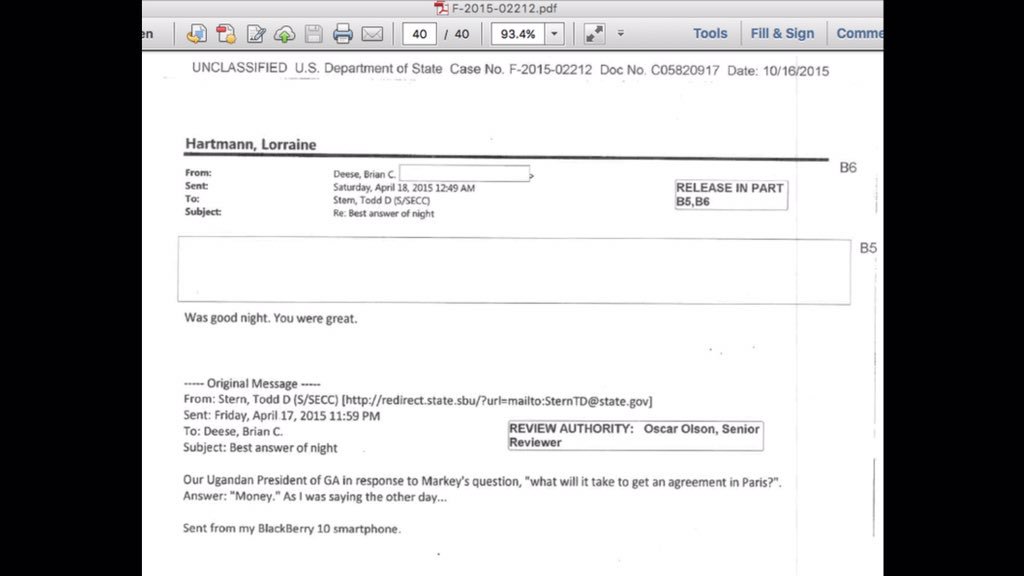 In other words, Paris was never really about climate. It was a wealth-redistribution scheme in which rich nations were expected to shower poor nations with free money.

This, of course, is the real reason for the widespread global outrage at Trump’s climate decision.

The pigs have had their enormous trough – stamped “$$$$ courtesy of Uncle Sam” – pulled from beneath their snouts and their instinctive response is to go “Sooooooeeeeee! Soooooeeeeee!”

My two favorite deranged responses so far. This one from The Nation explaining that Trump is Hitler because he sorta, kinda used a phrase vaguely like Hitler once did in one of his speeches.

On September 30, 1942, shortly after the death camps began gassing Jews, Hitler declared, “In Germany too the Jews once laughed at my prophecies. I don’t know whether they are still laughing, or whether they have already lost the inclination to laugh, but I can assure you that everywhere they will stop laughing. With these prophecies I shall prove to be right.”

Five weeks later, he declared, “Today countless numbers of those who laughed at that time, laugh no longer. Those who are still laughing now, also will perhaps laugh no longer after a while.”

On June 1, 2017, Donald Trump announced that he was pulling America out of the Paris climate accord. “At what point does America get demeaned? At what point do they start laughing at us as a country? We want fair treatment for its citizens and we want fair treatment for our taxpayers. We don’t want other leaders and other countries laughing at us anymore, and they won’t be. They won’t be.”

See the similarity? Me neither. Presumably that’s why author Sasha Abramsky has to editorialize desperately:

“It’s not a direct quote from Hitler, but it’s perilously close.”

But I forget. When you’re a liberal, everyone who disagrees with you is Hitler. So I suppose to Nation-readers this article is only stating the obvious.

Even better though, I think, is the announcement by the United Nations that it intends to reject Trump’s offer to renegotiate Paris.

Here is the Executive Secretary of the UNFCCC (United Nations Framework Convention on Climate Change) spelling it out:

#ParisAgreement, a historic treaty signed by 194 & ratified by 147 countries, cannot be renegotiated based on the request of a single Party. https://t.co/FEz1JsVmk0

Why is this so funny? Well it’s a bit like the Camp Commandant at Colditz Castle announcing sternly to the prisoners who have daringly escaped that under no circumstances will they ever be allowed inside the wire and back to their lumpy beds and freezing cells.

President Trump has just made what successful escaping prisoners in World War II used to call a Home Run. I doubt he has many regrets about the camp guards he has left behind.