A side-by-side comparison of the Taurus 85, Ruger LCR, and Kimber K6s provide a great opportunity to see what differentiates one concealed carry revolver from another across a broad price spectrum. 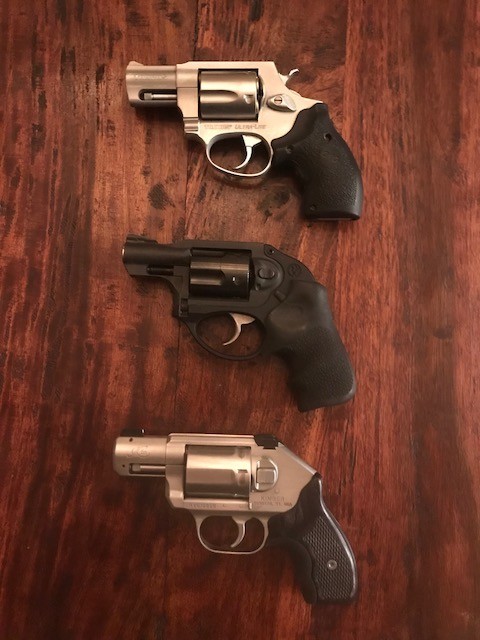 The Taurus 85 weighs just over 22 ounces, the Ruger LCR weighs 17.1 ounces, and the Kimber K6s weighs 23 ounces. Of the three, the Ruger LCR is able to reach a lighter weight because much of the gun is made of polymer, like a semiautomatic. But there is a trade-off for the savings in weight–namely, that the Kimber K6s feels good when shooting .357 Magnum while the Ruger LCR can jump quite a bit in the hand. The trade-off for a light Ruger LCR is that is does not handle the recoil of forceful .357 as well as heavier guns, but the benefit is that it is light and can shoot .38 Special +P loads with excellent concielability.

The Taurus 85 has a hammer that can be cocked, providing single action or double action, while the Ruger LCR and Kimber K6s are both double action all the time.

All three guns have ample aftermarket accessories available for them, including crimson trace laser grips (the Taurus and Kimber are equipped with Crimson Trace now). These lasers turn on from the pressure of the shooter’s hand squeezing the grip.

The guns have all been flawless in performance, but the nudge goes to the Kimber K6s for the unbelievable trigger. While shooting the K6s the shooter can literally feel the weapon about to fire.