A Portland, Oregon, food cart has been forced to close, according to its owners, after an employee was threatened and mocked by “abolish ICE” activists.

The Happy Camper food cart, owned operated by Scott and Julie Hakes of Portland, is being forced to close after their 21-year-old daughter, Brianna, — who works at the food cart — was allegedly targeted and threatened by illegal alien activists nearby with an “abolish ICE” camp site.

For weeks, illegal alien activists have taken over the sidewalk and roadway to protest the Immigration and Customs Enforcement (ICE) agency. The activists are demanding that the local Portland ICE office be shut down, though police have ordered the activists to shut down the camp site.

The Happy Camper food cart serves food to the public and gives the profits towards helping the homeless in the Portland area. Now, the owners of the food cart are saying they are having to close down shop after Brianna was threatened and followed by abolish ICE activists after she sold an ICE employee food.

Brianna captured footage of the multiple incidents, where abolish ICE activists shout at her through a bullhorn.

“They already know what she drives,” Pam Hakes told KGW News of the abuse their daughter has endured. “They see her walking around and they run after her.”

“She finally had enough,” Scott Hakes, the girl’s father told KGW News. “She finally called me up on the phone, crying.”

“The antagonizer screams out, gets on the blowhorn and starts screaming that my daughter is laughing at them, trying to make a mockery of them,” Scott said. “If they catch her outside the cart, they’re going to hurt her. They’re constantly cussing at her and screaming at her.”

Journalists who have visited the camp say the area has a “memorable” smell and, ironically, has strict rules inside the borders of the camp.

I just got back from the “abolish ICE” Portland camp. It’s become a sprawling parallel fortress society. The smell is memorable. Many rules (eg photography not allowed inside). pic.twitter.com/u1doewRaaZ

A bit of panic ensues when Portland Police finally go inside camp to post statements that space will be cleared. I followed them. pic.twitter.com/4EqNnljXHs 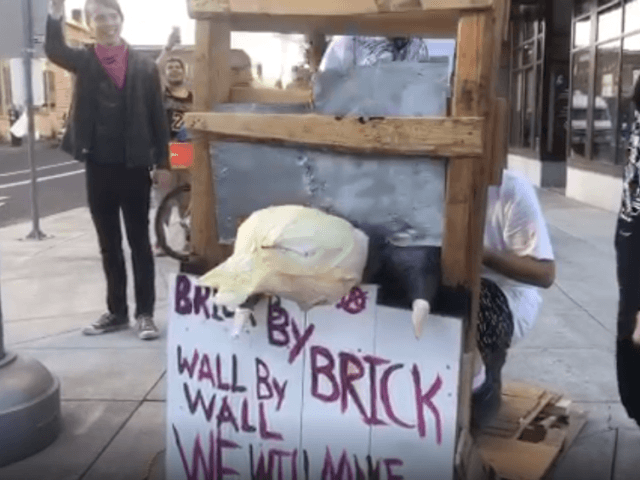 Abolish ICE activists with the George Soros-funded group “United We Dream” recently shut down an intersection in Miramar, Florida, demanding that the local ICE office be closed down, Breitbart News reported.