The New York Post mocked Meghan McCain as “The Meg” on its Sunday cover after she used the opportunity of her father’s funeral to attack  President Trump.

“The Meg” is a reference to a plus-sized shark in the late-summer hit movie The Meg, starring Jason Staham. 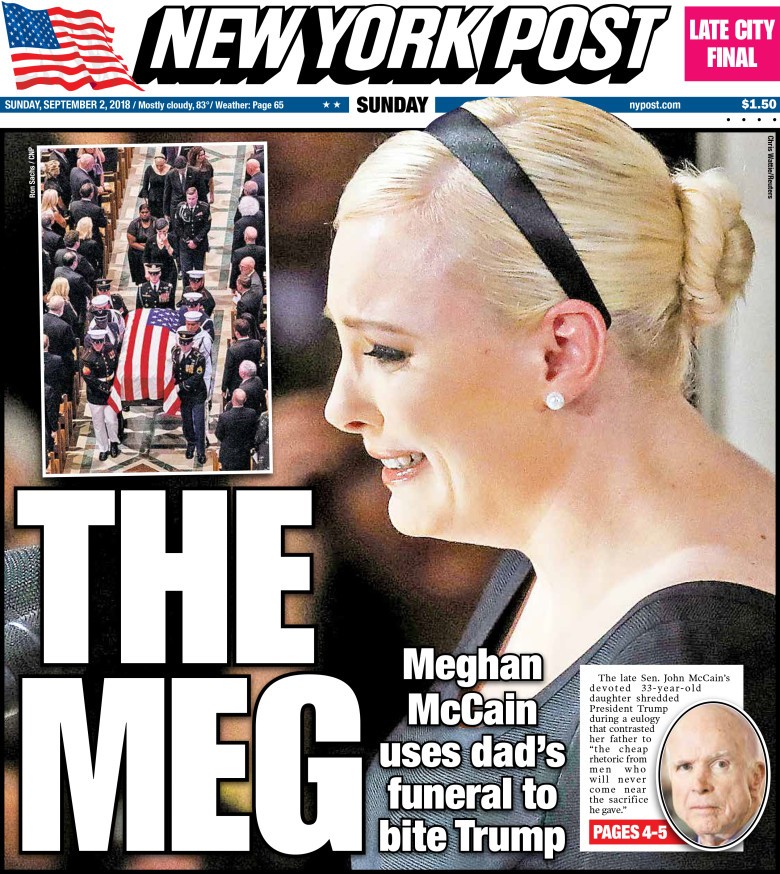 The New York Post cover is just one part of a brewing backlash against McCain and the overall funeral service for Sen. John McCain (R-AZ), which turned into an unseemly partisan rally Saturday with speakers like former Presidents Barack Obama and even George W. Bush trashing President Trump, who Sen. McCain refused to invite to his own funeral.

What made Saturday’s shocking display all the more crass was that Trump’s daughter Ivanka and son-in-law Jared were invited to the funeral and were forced to sit there and be humiliated, which might have been the plan. The McCains are infamous for holding petty grudges.

In an obvious shot at Trump, Meghan McCain used her eulogy to describe the death of her father as the passing of “American greatness. The real thing, not cheap rhetoric from men who will never come near the sacrifice he gave so willingly, nor the opportunistic appropriation of those who lived lives of comfort and privilege while he suffered and served.”

For good measure, she added, “The America of John McCain has no need to be made great again because America was always great.”

Obama was also not subtle. He ripped into those who traffic in “bombast and insult and phony controversies and manufactured outrage.”

Also, in an apparent fit of pique against Trump, one of McCain’s final acts as a U.S. Senator was to violate his longstanding and oft-repeated promise to voters to repeal ObamaCare.

Although McCain had repeatedly given his word over a number of years to repeal the unpopular boondoggle, when his was the deciding vote in July of 2017, before voting thumbs down, McCain reportedly said to Senate Minority Leader Chuck Schumer (D-NY) “Let’s see Donald make America great again now” — an obvious reference to the president.

McCain then went back on his pledge. His lone vote was the one that saved Obamcare, but he had his revenge.

For his part, Bush was only a tad more subtle. He described McCain as a man who “respected the dignity inherent in every life – a dignity that does not stop at borders and cannot be erased by dictators.”

According to the Associated Press, the audience, which was filled with media and political elites, even applauded as though this were a campaign rally, as opposed to a funeral for a legitimate war hero and long-term senator.

Many of those watching at home were disgusted by the politicization of a man’s death, and used social media to comment on the irony-filled and inappropriate spectacle of elites using a funeral service (of all places) to attack others over partisanship and a lack of decency. The applause was even worse.

On social media, the reaction was mostly one of shock and sadness at the lack of self-awareness, as opposed to the bitterness that emanated from the Washington National Cathedral:

This new trend of using funerals and eulogies to deliver political messages is really quite disgusting.

Sympathy from death as means to sway public opinion is next level corrupt.

Everyone involved should be ashamed of themselves.

My father was neither famous, nor did he have enemies. But when he died, my only concern was that he ascend to heaven surrounded by love and dignity. Meghan McCain’s eulogy weaponized her own love, and trivialized her father. It was an embarrassment.

At most funerals I’ve attended, it’s God’s love that fills the room, not hate and animus for a person who is not even in attendance.

Another grotesque stunt by the D.C. elites–bashing President Trump at another funeral.

And they wonder why Americans have contempt for them… #McCainMemorial

I lost a woman I loved more than almost anyone this year. It never once dawned on me to eulogize her by throwing in some digs at people she or I may have disliked. I was too busy celebrating and honoring her and feeling sad to even allow adversarial thoughts or speech to enter.

Love him or hate him, he’s still their obsession. They can’t do anything without talking about him. Must suck to be that deranged and pathetic. #MAGA

Sadly, @MeghanMcCain seemed to do exactly what she slammed Trump for doing. What should have been reflection and celebration of a patriot’s life, has been turned into political theatrics and cheap shots. It’s embarrassing, and really disappointing. https://t.co/xVK1PxOkVf

I note that, thanks to his enemies, Trump – without even trying – managed to be the star of the McCain funeral.

And a lot of people in the establishment in the press think today was a victory for them.