Former First Lady Michelle Obama has come out in praise of Meghan Markle, saying the Duchess of Sussex is “breaking the mold” as one of the world’s “thoughtful leaders.”

Her ringing endorsement follows that of former first lady and failed presidential candidate Hillary Clinton who has called the Suits actor an “inspiration.”

Mrs Obama used Instagram on Wednesday to share an image of her fellow American as she attended a reception for Young People at the Residence of the British High Commissioner in Cape Town.

“Thank you to my friend, Her Royal Highness The Duchess of Sussex, a thoughtful leader who is breaking the mold and making our world better for it,” she wrote.

“Whether meeting with our leaders or helping girls around the world seek the education they deserve, she is an inspiration to so many.”

Thank you to my friend, Her Royal Highness The Duchess of Sussex @sussexroyal, a thoughtful leader who is breaking the mold and making our world better for it. Whether meeting with our @ObamaFoundation Leaders or helping girls around the world seek the education they deserve, she is an inspiration to so many.

It appears the admiration of Obama for Markle works two ways.

The Duchess interviewed the former first lady for the September 2019 issue of British Vogue, which the Duchess guest edited. In it the two discussed motherhood, giving advice to children, and girls’ education.

The Duchess of Sussex called the former FLOTUS “magical” and praised her “endearingly frank, down-to-earth personality.”

More recently Hillary Clinton went public with her adoration of the Duchess, being full of praise for how the newly-minted Royal is “representing the U.S. in the UK and on the world stage.”

She took to Instagram earlier this month to share a snap of the Royal hugging a woman to illustrate her affection.

Hillary captioned the picture: “I’m so inspired by how Meghan Markle—aka one half of @sussexroyal—is representing the U.S. in the U.K. and on the world stage.

“Meghan’s new project: Helping @SmartWorksCharity equip women who have been out of the workforce with the office essentials they need to feel confident in job interviews and beyond. 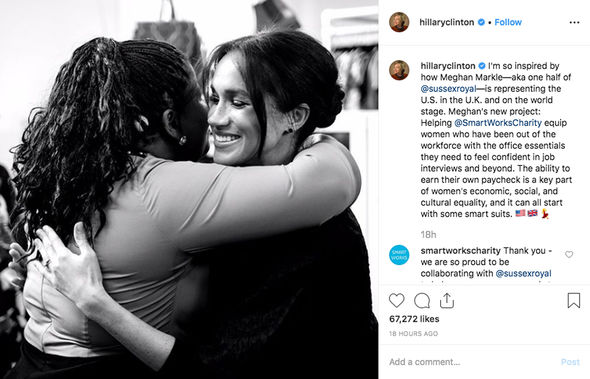 Prince Harry and the Duchess of Sussex  arrived in Africa on Monday as part of their plan to spread their climate advocacy to a new audience.

Baby Archie has joined them on the flying 10-day visit along with a team of 13 assistants including a “social media officer” and a hairdresser for Markle.

The praise for the Duchess coming from two former first ladies is not the first nod towards her rising global profile and the adoration from international elites.

As Breitbart News reported, earlier this month she was crowned Britain’s top social climber by society bible Tatler which observed Markle had reached “the pinnacle of the greasy pole” in the space of barely 12 months.

The 38-year-old achieved her honor in social mobility by the simple process of marrying into the British Royal Family, Tatler observed.

The Ralph and Russo-clad beacon of change has found a role that suits her to perfection: A tungsten toughie to drag the Royal Family into the 21st century.

The Duchess’ half-sister Samantha Grant has previously stated Meghan’s “ambition” was to become a princess.