A new study reveals that 110,000 Californians bought guns during the coronavirus pandemic, 43% for the first time — and the most common reason given was fear of “lawlessness.”

The study, carried out by the Violence Prevention Research Program at the University of California Davis, casts firearm purchases as a response to the “pandemic,” and concludes that COVID-19 “exacerbated persistent structural, economic, and social inequities in the conditions that contribute to violence and its consequences.”

The study reveals that 43% of the people who purchased firearms during the pandemic were first-time gun owners. The authors conclude that this reflects underlying inequalities in society — that “the coronavirus pandemic and efforts to lessen its spread have compounded the burden of violence-related harms.”

However, the authors appear to overlook another explanation — namely, the fact that violent riots were going on in California and the rest of the country during the period in which its online survey of 2,870 adults was taking place, July 14 to 27.

In the months since the death of George Floyd in police custody in Minneapolis, Minnesota, 48 of America’s largest 50 cities have been affected by riots.

The study does not mention riots. It does, however, mention “protests for racial justice and police accountability,” blaming police and “white supremacists” for any violence:

Recent, largely peaceful, protests decrying structural inequities, which simultaneously allow police violence and the uneven burden of disease to persist, have been met, at times, by law enforcement use of crowd-control weapons and heavily armed white supremacist and far-right vigilantes.

The study also found that the only category of violence that respondents were not worried about increasing was mass shootings — the type of event that has spurred public debate about gun control. 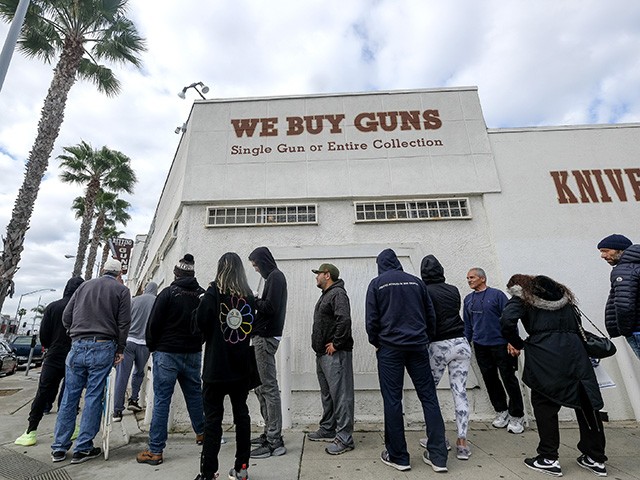 People wait in a line to enter a gun store in Culver City, Calif., Sunday, March 15, 2020. Coronavirus concerns have led to consumer panic buying of grocery staples and now gun stores are seeing a run on weapons and ammunition as panic intensifies. (AP Photo/Ringo H.W. Chiu)

As the Los Angeles Times notes in its coverage of the study, one of its main concerns is the danger to public safety posed by new gun purchases, especially given that many new gun owners appear to be storing their weapons loaded and ready, rather than unloaded and locked away.

Drawing a link between firearms and an infectious disease pandemic may seem like a stretch. But the UC Davis researchers make clear that, against the backdrop of a national emergency, each trend observed — an increase in the number of guns in circulation, the establishment of new gun-owning households and the relaxation of many households’ safe-storage practices — is likely to boost the risk of gun-related accidents, suicides and violence. Their cumulative effect could be hard to predict.

Former Vice President is pledging to end the “gun violence pandemic,” and his platform calls for funding for research on gun violence to be conducted by the Centers for Disease Control and Prevention (CDC). President Donald Trump has stressed Second Amendment rights in his re-election campaign.

California’s firearms laws are among the most restrictive in the nation.