America celebrates its independence on the Fourth of July, while captive people around the world hope they might one day celebrate their own.

Meanwhile, violent separatist movements are causing death and misery in the service of less admirable political goals. The globalist movement desires a more tightly interconnected world with less national sovereignty, but almost every large nation is bulging with restless populations that long for autonomy.

July 4 arrives three days after the 25th anniversary of the United Kingdom handing Hong Kong over to China. The event is as solemn for lovers of liberty as the Fourth of July is joyous, for the Chinese Communist Party has mercilessly exterminated freedom in Hong Kong, blatantly violating its commitments to the U.K. in its panicked zeal to crush the incredible 2019 pro-democracy movement. 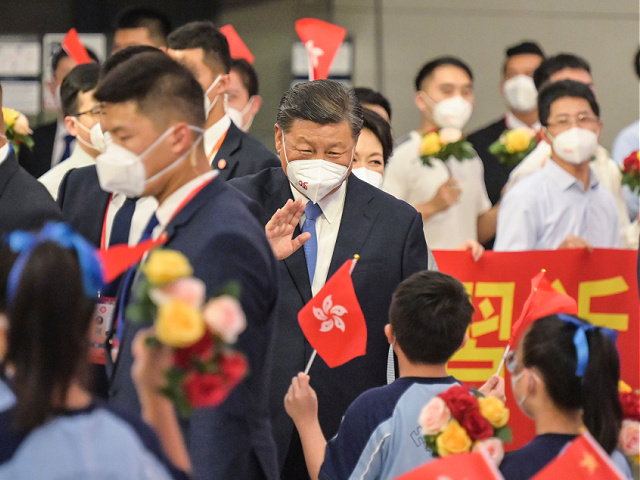 “China has ripped up the joint declaration and is vengefully and comprehensively trying to remove the freedoms of Hong Kong because it regards them as a threat, not to the security of China but to the ability of the Chinese Communist Party to hang on to power,” Patten said.

“I think the big changes have come since 2012, 2013, 2014 since Xi Jinping’s been the dictator,” he reflected, correctly describing China’s authoritarian ruler when so many Westerners who should know better are content to let him posture as some sort of elected “president.”

Patten noted on Wednesday that Xi quite literally declared war on liberal democracy everywhere in China, including Hong Kong, when he came to power. Official Communist mythology now teaches that Hong Kong was never a “colonial” possession, but rather an eternal piece of Chinese property once illegally “occupied” by the British. 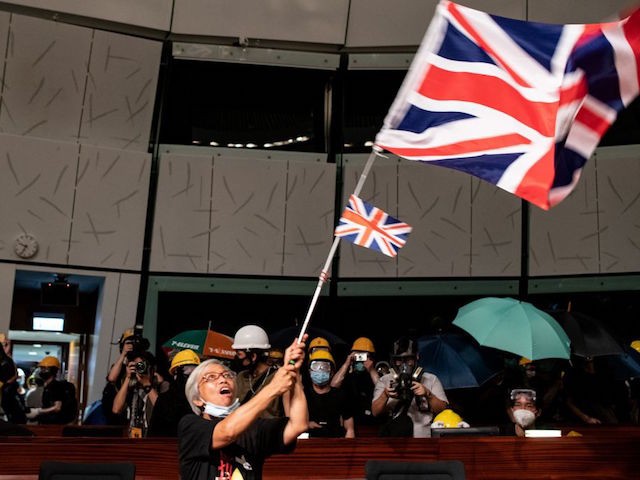 A protester waves the British Union Jack flag in the parliament chamber after they broke into the government headquarters in Hong Kong on July 1, 2019, on the 22nd anniversary of the city’s handover from Britain to China (PHILIP FONG/AFP/Getty Images)

“Occupied by who? Occupied by people who were refugees from communism on the mainland, like Jimmy Lai, who swam to the water to get to where? A British colony,” Patten sorted, referring to the pro-democracy media mogul who has been jailed under Beijing’s tyrannical “national security law” for advocating freedom.

Hong Kong is a vital case study in independence because – contrary to perpetual Chinese communist bleating about “separatists” and “traitors” – its pro-democracy movement did not demand formal separation from China.

The famous “five demands, not one less” promulgated by the 2019 movement were demands for reform, not a declaration of independence. The most dramatic of them called for the direct election of Hong Kong’s executives and legislators, currently selected in a ghastly mockery of democracy that was recently rigged even further to ensure only loyal puppets of the Chinese Communist Party can stand for election. Most Hong Kong residents clung to their dignity by refusing to participate in the farce.

As Patten pointed out, dictator Xi was convinced that even Hong Kong’s modest autonomy would inexorably lead to separation and independence. The 2019 pro-democracy protests were launched when China demanded more power to extradite suspects from Hong Kong. The people of the island correctly saw this as an assault on what remained of their qualified independence, not only in principle but because China would be able to black-bag anyone who challenged Communist power and drag them off to absurd closed-door trials in China. Hong Kong resisted, and China crushed all that remained of their independence.

The oppression of Hong Kong stiffened the resolve of Taiwan, which no longer appears to be tempted to any significant degree by Beijing’s promises of limited autonomy in a Hong Kong-style arrangement. Taiwan just watched that sort of deal go south in the worst possible way.

Autonomy can be taken away by police, while independence can only be seized by soldiers. Taiwan is independent in nearly every way that matters, and China treats it more like an enemy nation-state than the “autonomous province” of official state rhetoric, including a campaign of methodical diplomatic isolation. The isolation the West hopes to visit upon outlaw Russia for attacking Ukraine is little different in concept from what China has been doing to Taiwan since the election of current President Tsai Ing-wen. 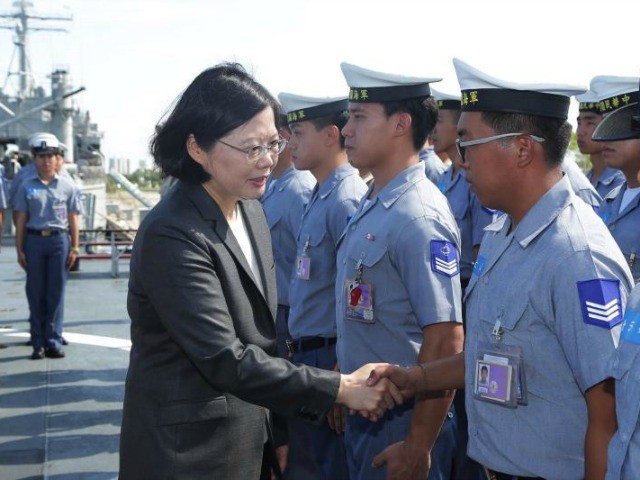 Taiwan is perched on the knife-edge of true independence, with China holding it back by constantly threatening to invade. Beijing constantly bullies international organizations from showing Taiwan any formal recognition as an independent state – to the absurd degree of putting lives in danger by keeping Taiwan out of the World Health Organization (W.H.O.), and to the extremes of pettiness by harassing foreign companies and clubs if their websites or paperwork imply Taiwan might be a country.

The tyrants of Beijing grasp that independence can be declared, as the American revolutionaries shook the world by doing, but it must be recognized to have real meaning – and it could be recognized as the true state of affairs long before any declarations are issued.

Independence Day 2022 finds the rest of the world in a state of deep tension between calls for globalization and trans-national power, versus the hunger of many peoples to assert their cultural identity or legal rights by claiming recognition as an independent state.

The drive for independence is rarely greeted warmly because it almost invariably comes with demands for territory that existing states are loath to relinquish.

Every Middle Eastern nation touching the Kurdish diaspora, for example, is worried about where the borders of Greater Kurdistan might be drawn. 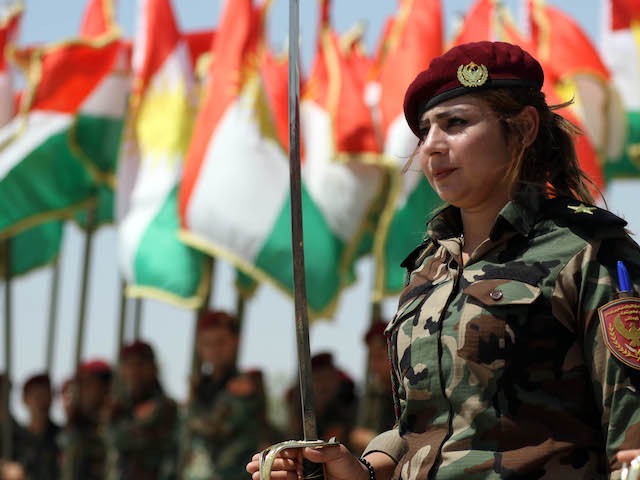 A woman fighter of the Iraqi Kurdish Peshmerga attends a ceremonial line-up past flying flags of Iraq’s autonomous Kurdistan region, during a training session by German military officers during the German Defence Minister’s visit at a facility on the outskirts of Arbil, the capital of the autonomous region, on August 21, 2019. (Safin Hamed/AFP via Getty Images)

The autonomy of Iraqi Kurdistan is currently under violent attack by terrorists aligned with Iran. Turkey is fighting a decades-long war with the Kurdish separatists of the PKK – and the Turks view just about every Kurd holding a gun as an auxiliary of the PKK, so they are on the verge of invading Syria again to attack its Kurdish militia.

Many of the oppressed Uyghur Muslims of China’s Xinjiang province believe they will never be safe from Beijing’s genocidal policies unless the historic independence of their homeland is restored as “East Turkestan.” China’s stated excuse for abusing the Uyghurs is to crack down on their separatist movement.

The Uyghurs might understand the difference in value between “semi-autonomy” and true independence better than even Hong Kong because millions of them were marched into Chinese concentration camps built in an area officially known as the Xinjiang Uyghur Autonomous Region (XUAR). In Xinjiang, autonomy means slavery.

China is likewise eager to stamp out any hint of independence for oppressed Tibet, a once-fashionable cause in the United States that still has a few devotees. In March, China erased popular American actor Keanu Reeves merely for reading a poem at a benefit event for Tibet.

Some of the world’s separatist movements are clearly vicious threats to stability, their methods having long ago descended into murderous terrorism.

Technically the Islamic State and its affiliates are separatist movements since they seek to carve independent states governed by extremist “caliphates” from existing territories, as ISIS did in Syria and Iraq during the Obama administration. ISIS gets along quite well with some ethnic and political separatist movements, as in Nigeria, where it has absorbed bandits and ethnic militia.

Nigeria also has a separatist movement called the Indigenous People of Biafra (IPOB), which the United States may designate as a terrorist group, although its advocates say the group is not large or violent enough to meet that designation, and the Nigerian government is using counter-terrorism as an excuse to suppress the IPOB by force.

A rebel uprising in Mozambique became an especially savage Islamic jihad, drawing strength from locals who feel the national government and foreign investors have taken advantage of them. Another vicious separatist insurgency in the Democratic Republic of the Congo (DRC) threatens to spark a regional war, as the DRC accuses neighboring Rwanda of supporting it. Ethiopia teeters on the brink of flying apart into several smaller ethno-states, a simmering state of civil war that could also become a larger regional conflict. 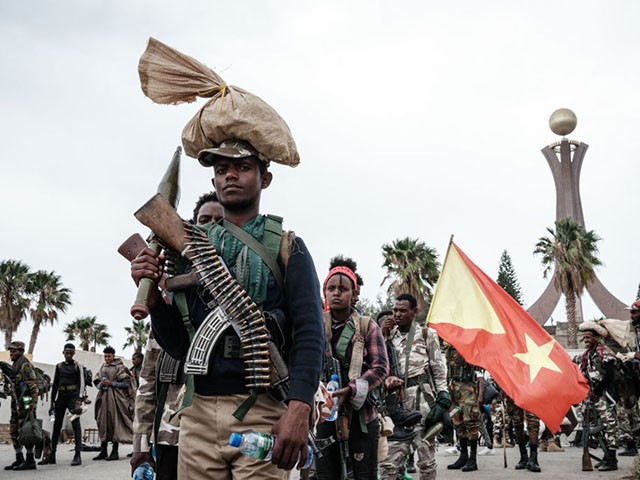 Cameroon has militant separatists who occasionally have bloody fights with each other as they squabble for control of their declared government-in-exile. Yemen’s government, overthrown by the Iran-backed Houthi insurgents in 2014, found itself fighting separatists on its southern flank; they patched up their differences to make common cause against the Houthis, but the so-called Southern Transitional Council is still in business.

Coming full circle back to the boundaries between East and West, the biggest geopolitical story of 2022 was sparked by a separatist movement: the pro-Russia separatists of the Donbass region in eastern Ukraine. 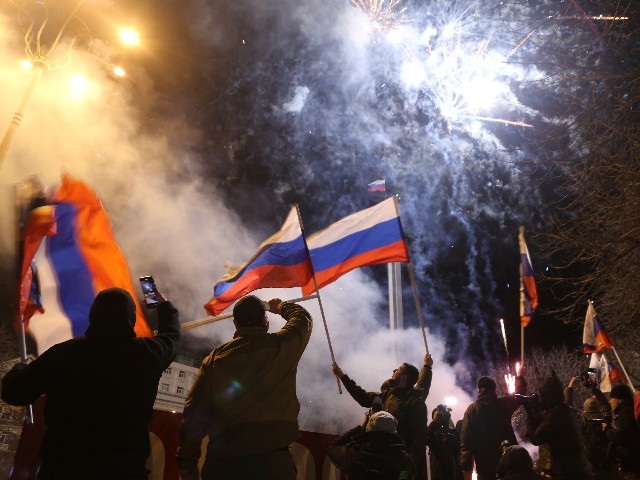 Russian leader Vladimir Putin unilaterally carved two independent “republics” out of Donbass at the beginning of the Russian invasion in February. One of Russia’s nominal reasons for invading was to protect the ethnic Russians of these republics from Ukrainian persecution. Russia used similar tactics to break up another former Soviet territory, Georgia, in 2008.

Almost every independence movement in the world today is opposed by existing powers on the grounds that it could merely be a pretext for breaking off valuable chunks of real estate, to be devoured by a rapacious neighboring nation, as with Russia and its “independent republics.” Almost every independence movement is denounced as the subversive work of foreign agents – language China incessantly uses with respect to Hong Kong and Taiwan.

Independence Day in the United States celebrates a unique historic moment. Few other bids for independence have been as successful, or as enduring, since then – but many around the world have dreams of breaking that trend.