The company founded by former President Donald Trump that launched his social media platform Truth Social is considering legal action against the Securities and Exchange Commission (SEC) for allegedly slow-walking approval of the company’s planned merger with another company that would provide the joint entity a mass infusion of capital, Breitbart News has learned exclusively.

Trump Media & Technology Group (TMTG), in a statement provided exclusively to Breitbart News, said it was exploring possible legal action against the SEC for the alleged delays, which the TMTG statement attributes at least in part to alleged political bias at the regulatory agency. TMTG — a private company — has been planning to merge with the SPAC, or special purpose acquisition company, Digital World Acquisition Corp. (DWAC), but the matter is on hold awaiting SEC approval — and has been for months. DWAC is a publicly-traded company.

“The SEC has stalled its review of our planned merger with DWAC, having failed to act despite DWAC having filed its registration statement more than four months ago,” TMTG said in the statement. “This inexcusable obstruction, which directly contradicts the SEC’s stated mission, is damaging investors and many others who are simply following the rules and trying to expand a successful business. In light of the obvious conflicts of interest among SEC officials and clear indications of political bias, TMTG is now exploring legal action against the SEC. Despite the increasing weaponization and politicization of government agencies, Truth Social will continue its expansion plans, supported by the unprecedented levels of user engagement on the platform.”

The SEC has not publicly confirmed the reason for the delays, but leaks to establishment media outlets suggest the agency is investigating several things about the merger — and that the Justice Department is also investigating. “The SEC launched an investigation into DWAC in December after allegations surfaced that company executives may have held talks with TMGT before DWAC’s initial public offering, which would violate regulations that prohibit SPACs from reaching merger agreements before raising funds,” Forbes reported in early August, for instance. “DWAC also revealed last month it’s the subject of a Justice Department criminal probe. It’s stated in regulatory filings that each member of the company’s board received a grand jury subpoena seeking information on communications with ‘multiple individuals, and information regarding Rocket One Capital’ a little-known Miami-based private equity firm.”

The delays risk access to significant capital that would have been available to Truth Social had the SEC approved the merger by Tuesday of this week. In total, approximately $1 billion in additional financing was committed by investors to TMTG through what is known as a private investment in public equity, or PIPE. Those commitments from the investors who pledged the billion dollars were contingent upon SEC approval of the private company’s merger with the SPAC by Tuesday, something that clearly will not happen because of SEC delays. 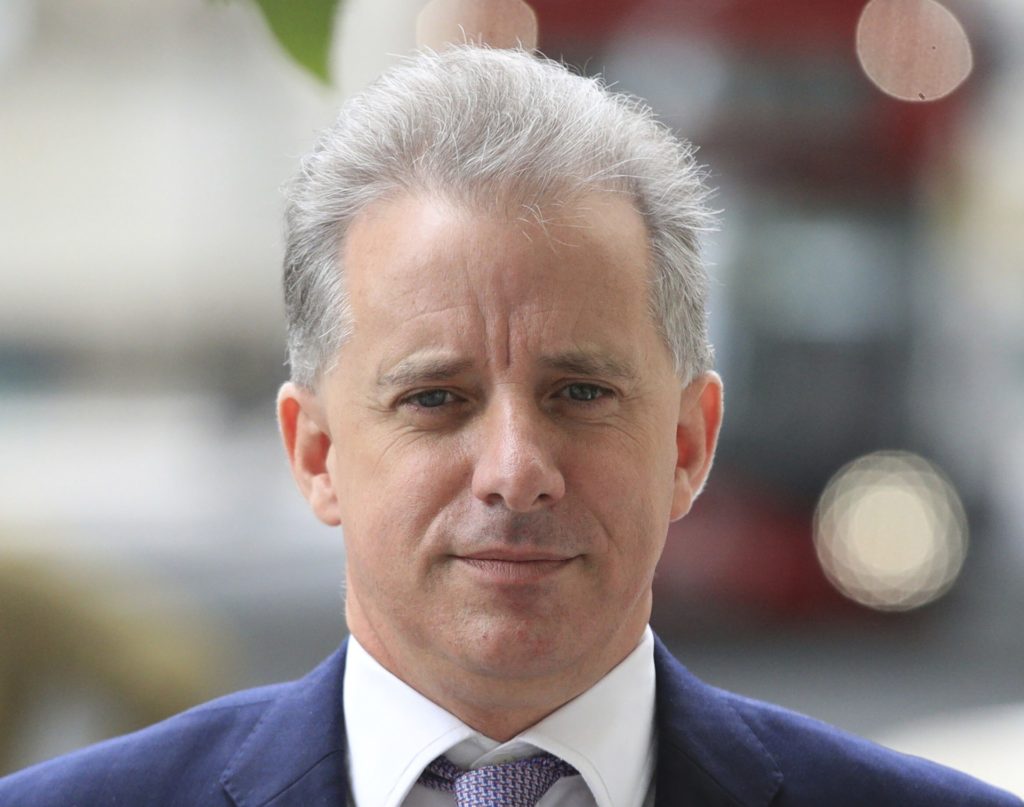 While it is unclear what the exact motives for the delays and investigations are, several recent reports — one from Just the News’s John Solomon and another from RealClearInvestigation’s Paul Sperry — seem to indicate several senior SEC officials in Democrat President Joe Biden’s administration may be engaging in political retaliation against their ideological foes. TMTG was obviously founded by Trump, and Truth Social’s CEO is former Rep. Devin Nunes (R-CA) — the one-time chairman of the House Permanent Select Committee on Intelligence (HPSCI). 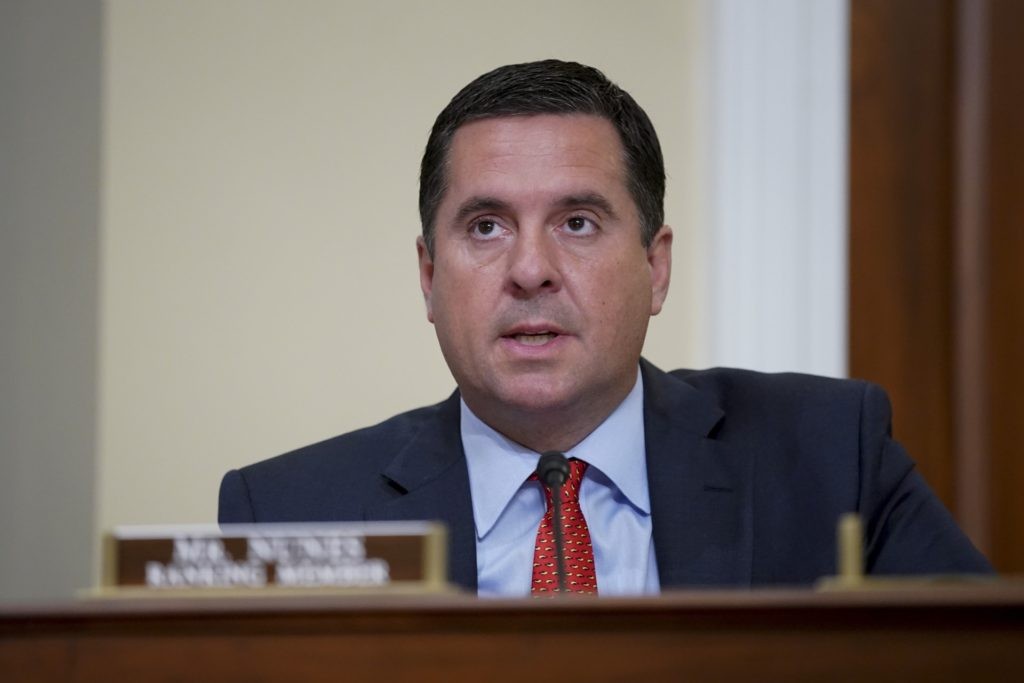 Nunes in his time as chairman during the Trump administration uncovered the origins of the Russia hoax against Trump, including several details regarding the Christopher Steele dossier and about the FBI’s alleged misconduct. 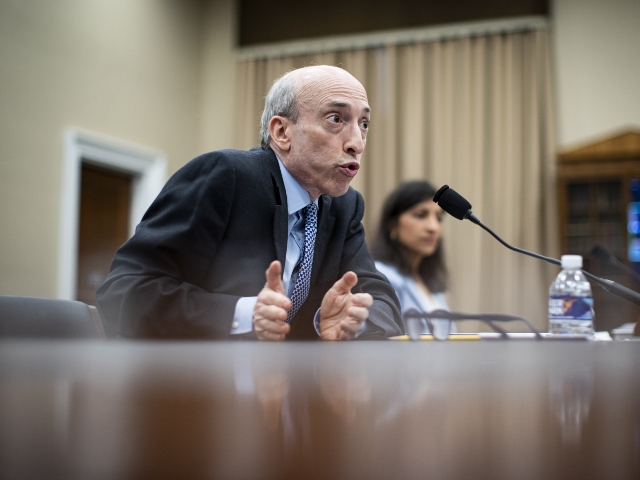 Gary Gensler, chairman of the U.S. Securities and Exchange Commission (SEC), speaks during a House Appropriation Subcommittee hearing in Washington, D.C., on Wednesday, May 18, 2022. (Al Drago/Bloomberg)

Now, according to Solomon and Sperry, in turns out the SEC chairman under Biden was actually intricately involved during his previous role in 2016 as chief financial officer of failed Democrat presidential nominee former Secretary of State Hillary Rodham Clinton’s campaign’s payments to fund the creation of the now-discredited Steele dossier. Biden’s SEC chairman is Gary Gensler, who was appointed when Biden took office and was confirmed by the Senate in the spring of 2021. 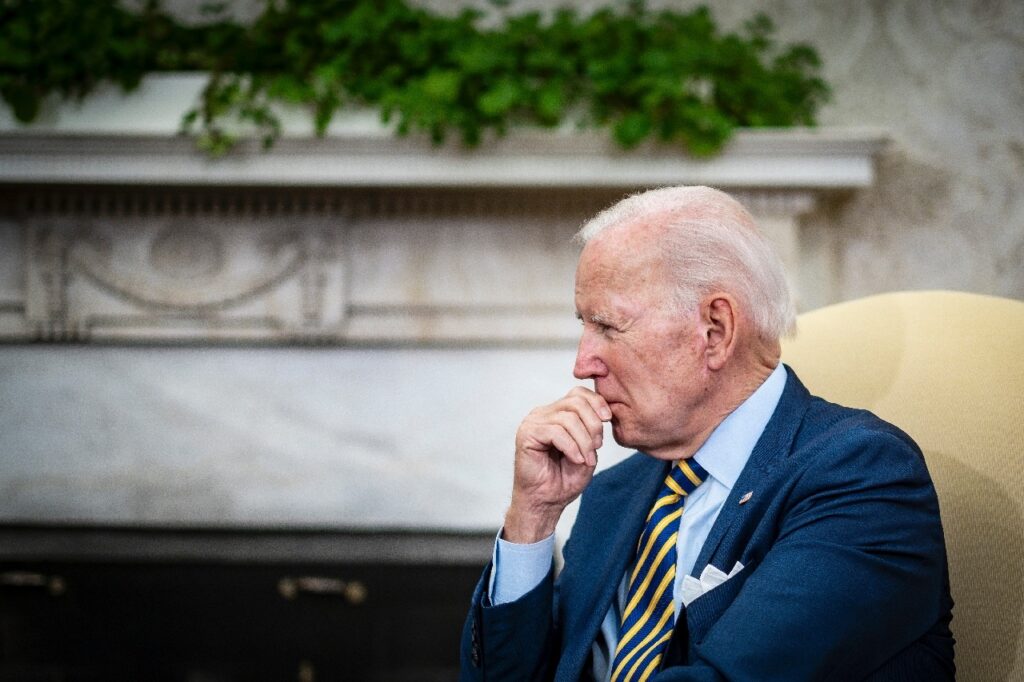 “While Gensler was widely known to be the Clinton campaign’s CFO, former Clinton campaign chairman John Podesta personally singled Gensler out for responsibility for funding the dossier,” Solomon wrote earlier this month. “In testimony before the House Intelligence committee in 2017, Podesta said Gensler was the top official in the campaign who would have approved payments to the campaign’s law firm Perkins Coie to reimburse for the work that the Fusion GPS research firm and Steele did on the dossier.”

It is possibly even worse than Solomon makes it out to be though. Sperry reported over the summer for RealClearInvestigations that disgraced former FBI agent Peter Strzok’s wife Melissa Hodgman is running point for Gensler at the SEC on such matters.

“Last year, Gensler named Melissa Hodgman his associate director of enforcement,” Sperry wrote in July. “She happens to be married to disgraced former FBI official Peter Strzok, who’s also implicated in Durham’s probe. Strzok led the investigation of Trump and his campaign, codenamed ‘Crossfire Hurricane,’ before he was fired in 2018 over anti-Trump texts he exchanged with his mistress, former FBI lawyer Lisa Page. As adviser to the head of the SEC’s enforcement division, Hodgman currently is helping oversee an investigation into Trump’s social media start-up, Truth Social. According to regulatory filings, the SEC last month served Trump Media & Technology Group with a federal subpoena for records. The company owns Truth Social, Trump’s answer to left-leaning Twitter, which kicked him off its platform last year over remarks he made concerning the Jan. 6 riot. The SEC reportedly wants to know more about merger talks between Trump’s parent company and Digital World Acquisition Corp., a publicly traded company regulated by the SEC. RCI contacted the SEC about the investigation and Gensler’s previous work for the Clinton campaign, but did not hear back.”

Depending on how this all shakes out — and whether legal action is pursued by TMTG and what form that possible legal action takes — this could turn into a nasty and bitter political battle that mirrors the dueling narratives over the Trump-Russia collusion hoax storyline. Obviously, in the end, Trump ended up winning that one; no evidence emerged to substantiate the hoax and plenty of evidence emerged undercutting the hoax’s creators. This particular storyline, while in its early stages, has already seen one of the hallmarks of the deep state’s efforts against Trump which is a handful of strategically placed establishment media leaks with at least partial truths designed to undercut confidence in Trump’s narrative that Truth Social is a successful enterprise.

But this type of activity extending beyond the normal political and intelligence and law enforcement world into the business world is, as one person deeply familiar with the matter told Breitbart News this weekend, “completely unprecedented.” This source expects Trump’s allies in Congress will furiously investigate this matter as well, especially if Republicans retake either the House or the Senate or both in the November midterm elections. That’s not because it involves Trump, this source said, but because the SEC is supposed to protect shareholders—that was the charter purpose under which the agency was founded–and these delays seem to be harming the very shareholders the agency is supposed to be looking out for. On that note, on Monday, hundreds signed onto an effort of retail investors of DWAC who launched a change.org petition to pressure the SEC to approve the merger.