On Tuesday afternoon, freelance writer Quinn Norton was hired by the far-left New York Times as its “lead opinion writer on the power, culture and consequences of technology.” About six hours later, she was fired after it was discovered that she considers a Nazi a “friend” and has lashed out at people by calling them “faggots.”

The tweets below undoubtedly represent who the Times thought it was hiring — yet another tired left-wing mouthpiece obsessed with identity politics, another champion for the crushing of individual rights through the power of centralized government:

Very quickly after the hire was announced, the Times was somehow blindsided — do they not have Google over there? — by the news that Norton is comfortable cozying up to Nazis and hurling the worst slurs in the history of the English language. 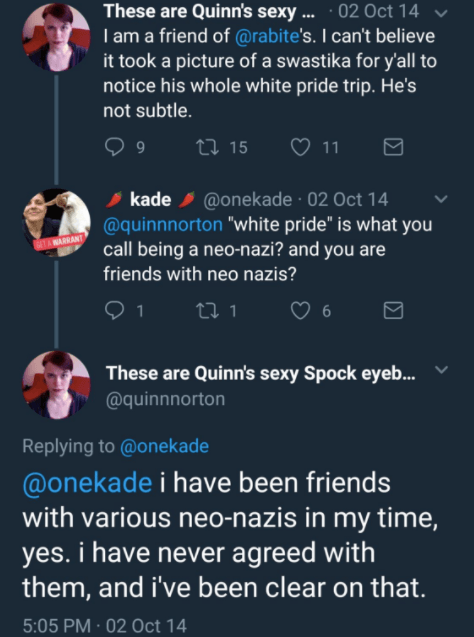 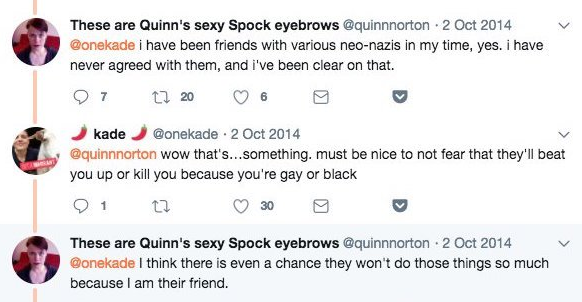 The leftist Norton has lashed out at people as “fags”: 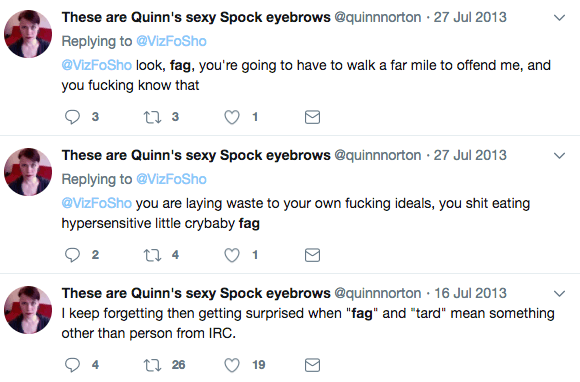 In the wake of the social media uproar, Norton tried to explain away her previous tweets.

“I don’t support weev, that’s not [a] given in how I define friendship,” Norton tweeted Tuesday evening. “I believe white folks should engage with the racists in their life … and I believe all people are redeemable, and “all people” is all people.”

“I’ve been a queer activist since 1992. But when I speak to communities, I used their language to do it. I talked about the Anonymous usage of “fag” and “faggot” here:

Like the dozens of left-wing “male feminists” in media and entertainment who have been accused of sexual harassment, sexual misconduct, and worse, Norton seemed to believe that if she professed the “correct” progressive beliefs, this somehow gave her some sort of inoculation when it came to her own personal behavior and relationships.

Because there are none, no one can name even one mainstream, right-of-center thinker/writer/pundit/celebrity/politician who has ever befriended a Nazi, or hurled these kinds of slurs. And yet, the Left is lousy with them. Not just Norton, but the openly homophobic Joy Reid and Alec Baldwin, who earn fat pay checks from NBC.

Norton may well have been using these slurs ironically, she may well have befriended a Nazi in the hopes of redeeming him, but she has also been hoisted by her own SJW petard. If you are going to run around smearing as racists those of us horrified at the thought of losing our individual healthcare rights to the same federal government responsible for the deadly Veterans Administration, you are directly responsible for creating the world that only saw the worst in you. You cannot ask to qualify for a benefit of the doubt when you do not offer others the same. Hopefully, losing this prestigious dream job will put a little of the charity Norton no doubt would have appreciated over the last 24 hours, into her own heart.