A Las Vegas police officer was shot on Sunday in an ambush-style attack. A shooter walked up to the police car, opening fire and injuring one of the officers in the two-man police cruiser. The suspect is now in custody.

UPDATE 6:54 p.m. PDT: More details emerge in the ambush-style shooting of the Las Vegas police officer. The suspect has been identified by police as a Hispanic male. News3LV reports both officers exited the vehicle when they determined they were taking fire. The passenger officer was struck in the right hand while exiting the vehicle. One of the officers was able to pull a citizen out of the line of fire and move them to a position of safety.

“The driver (police officer) saw a suspect, a Hispanic Male. The driver yelled at him, where is the gun, and the suspect dropped it,” Undersheriff McMahill told the Las Vegas television station. He said they arrested the suspect and then found a Springfield handgun. Police believe they have a name for the suspect, but have not yet confirmed it. More information will be released on Tuesday.

McMahill told the television station reporters that this is the fourth officer of his that has been shot this year. “It gets old. It’s tiring. Those men and women are out there trying to do the best that they can to provide service to this community. Certainloy the one solace that they can take is the vast majority of this community is behind this police department and we know that.”

The two officers were inside a patrol car and were responding to a disturbance call at a retail store when the suspect walked up to the patrol vehicle and started shooting, according to a report by Fox5Vegas.

After striking one of the police officers with a bullet in the hand, the suspect ran a short distance and then surrendered, according to the Las Vegas Review-Journal. The shooting took place near the intersection of Tropicana and Nellis Boulevard.

Las Vegas Metro police said their officers fired no shots and the suspect was taken into custody without incident. He dropped the gun after a short foot chase, according to Metro Undersheriff Kevin McMahill.

Officials stated the as yet unidentified shooter was using a Springfield semi-automatic pistol. The officer’s injury was not considered to be life threatening.

A witness to the shooting, Robert Benjamin, told the Review-Journal, “He didn’t resist or put up a fight.” Benjamin had been “flying a sign for Jesus” on the corner and heard three shots that were fired by the suspect.  FOX5 Vegas – KVVU

“We did not fire a shot back at this suspect in this incident,” McMahill told reporters according to LasVegasNow. “That shows you a lot about how it is, that these officers are going out there and being attacked while they’re sitting in a police car, and we didn’t fire a shot back at them — remarkable restraint shown by my police.” 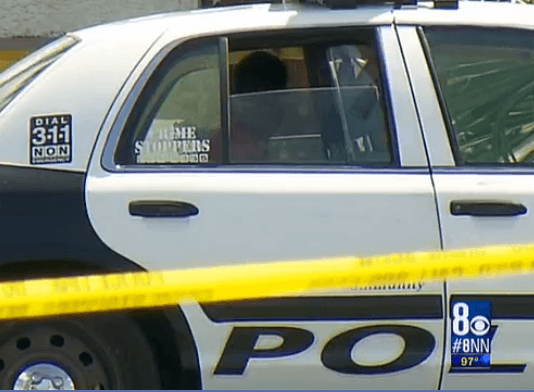 LasVegasNow captured this image of a possible suspect in custody. He appeared to be handcuffed in the back seat of a patrol car. (Video Screenshot/LasVegasNow – CBS 8)

Officials said all officers have been riding in two-man units since an officer involved shooting last Friday. In that shooting, an officer was shot in the leg while responding to a burglary report, according to Fox News. Earlier this week, Clark County Sheriff Joe Lombardo sent out a memo to officers warning them to take extra precautions.

“We are certainly working on pins and needles,” McMahill told KSNV. “(That is) part of the reason we doubled them up. So we have two officers available immediately whenever an incident occurs.”

This ambush-style shooting comes just over one week from the execution of Harris County Deputy Sheriff Darren Goforth, as reported by Breitbart Texas. The Texas deputy was filling his patrol vehicle at a Chevron station when he was gunned down in cold-blood.